Brett Kavanagh during arguments over legality of Clean Power Plan: ‘Global warming is not a blank check’ – Judge Could Put A Serious Damper On EPA Power Grab 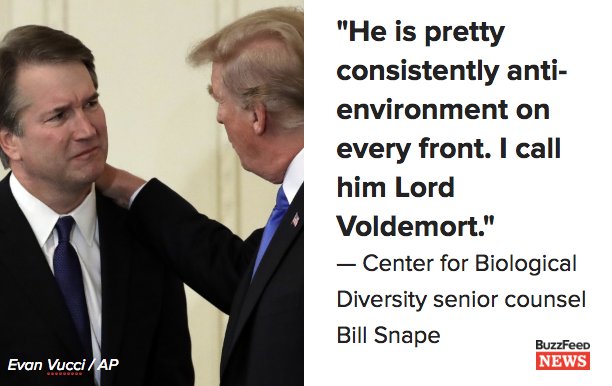 Judge Brett Kavanaugh, one of President Donald Trump’s top choices to replace Justice Anthony Kennedy on the U.S. Supreme Court, has played a role in reining in executive branch agencies.

Kavanaugh, one of the most conservative judges on the D.C. Circuit Court, has authored opinions skeptical of Environmental Protection Agency (EPA) regulations many conservatives see as abuses of federal power.

During oral arguments over the legality of the Clean Power Plan, Kavanagh said, “Global warming is not a blank check.”

Kavanaugh used a similar line when striking down Obama administration regulations on hydrofluorocarbons, or HFCs, in 2017.

“Climate change is not a blank check for the President,” Kavanaugh wrote in the majority opinion, ruling the EPA did not have the power to regulate greenhouse gases under its authority over ozone-depleting substances.

Kavanaugh also dissented in the D.C. Circuit’s upholding of Obama administration regulations on mercury emissions from coal-fired power plants. Kavanaugh’s dissent was affirmed by the Supreme Court’s 2015 ruling that struck down the Obama-era rule.

“No regulation is ‘appropriate’ if it does significantly more harm than good,” former Justice Antonin Scalia wrote in the majority opinion in 2015.

Some Democrats and environmental activists fretted that Kennedy’s departure from the court could mean the EPA’s authority to issue global warming regulations could be overturned. That authority was affirmed by the Supreme Court in the 2007 case Massachusetts v. EPA.

The Supreme Court’s 5 to 4 decision was only possible because Kennedy sided with liberal justices. Some fear Kavanaugh, of Barrett, would tip the balance against EPA authority.

“Nothing environmentally good is going to come out of replacing Anthony Kennedy with anyone whom Donald Trump believes is qualified to sit on not only the Supreme Court, but any court,” former Sierra Club lawyer David Bookbinder told E&E News.

However, Adler said it’s unlikely the court overturn Massachusetts v. EPA because of its strong tradition of “stare decisis” — latin for “to stand by things decided.”

“It’s one thing to overturn a bad constitutional decision because Congress can’t fix that,” Adler said, though he added a Kennedy-less court could narrow the application of Massachusetts v. EPA.

“It’s not going to be overturned,” he said