In a new paper published in the Journal of Social Marketing, Dr. Erik L. Olson spotlights the “Fakegate” scandal as a salient example of the unethical and deceptive practices used by those who promote dangerous anthropogenic global warming (AGW) — a“difficult-to-sell” cause. It is suggested that the ethically questionable tactics employed by AGW “marketers” (i.e., falsely hyping “the severity, immediacy and certainty of AGW threats”) have failed and should be resisted.

Three years ago, an unheralded paper was published in The International Journal of Geosciences entitled “Climate Change Science & Propaganda” (Nelson, 2015).  The author, a retired chemical engineer, openly and brazenly characterized the United Nation’s Inter-governmental Panel on Climate Change (IPCC) as an “undisputed” distributor of propaganda.

“Propaganda is a manipulation tool focused primarily on emotions. It has little to do with truth or facts and everything to do with persuasion and motivation. Whether that is good or bad, depends on whether you feel science should be boringly independent and often ignored, or entertainingly deceptive but viewed by many. If the initial reaction is emotional, it’s probably propaganda.”

“The IPCC members are obligated to uphold, maintain, and implement its principles and promote its products, and act in accordance with the manifesto (IPCC, May 2011 p. 24). They must proactively communicate with the media and correct any incorrect representations that may be damaging (IPCC, May 2011, p. 33). Bureau members must not express any views beyond the scope of the reports (IPCC, May 2011, p. 36). All members, including all lead authors (IPCC, Nov 2011, p. 16) must sign a conflict of interest form (IPCC, Nov 2011, p. 19), which indirectly obligates them to uphold the IPCC principals and products.”

“It is undisputed that not only does the IPCC recommend propaganda, it teaches and promotes it.”   — Nelson, 2015

Olson targets the tendency for the purveyors of dangerous AGW to utilize deceptive and unethical tactics in an effort to garner the public‘s attention and to “sell” governmental policies that promote costly emissions mitigation.

He analyzes the public’s response to the “Fakegate” scandal — an instance in which an activist climate researcher named Peter Gleick admittedly stole documents and deceptively posed as a Heartland Institute member in a failed attempt to undermine climate change skepticism.

The results of the analysis reveal that AGW advocates (or, as Olson calls them, “believers”) tend to justify the unethical conduct of those on their side as long as the transgression is deemed to have been for a “good cause”.

Noting that the AGW paradigm is “difficult-to-sell”, Olson warns that the utilization of deceptive headlines, the unethical practice of manipulating temperature data to “hide the decline”, stealing documents  and faking authorship . . . are not effective selling points when it comes to persuading an already skeptical public.

Instead, as a marketing tool, the utilization of deceptive and unethical  tactics are destined to fail. 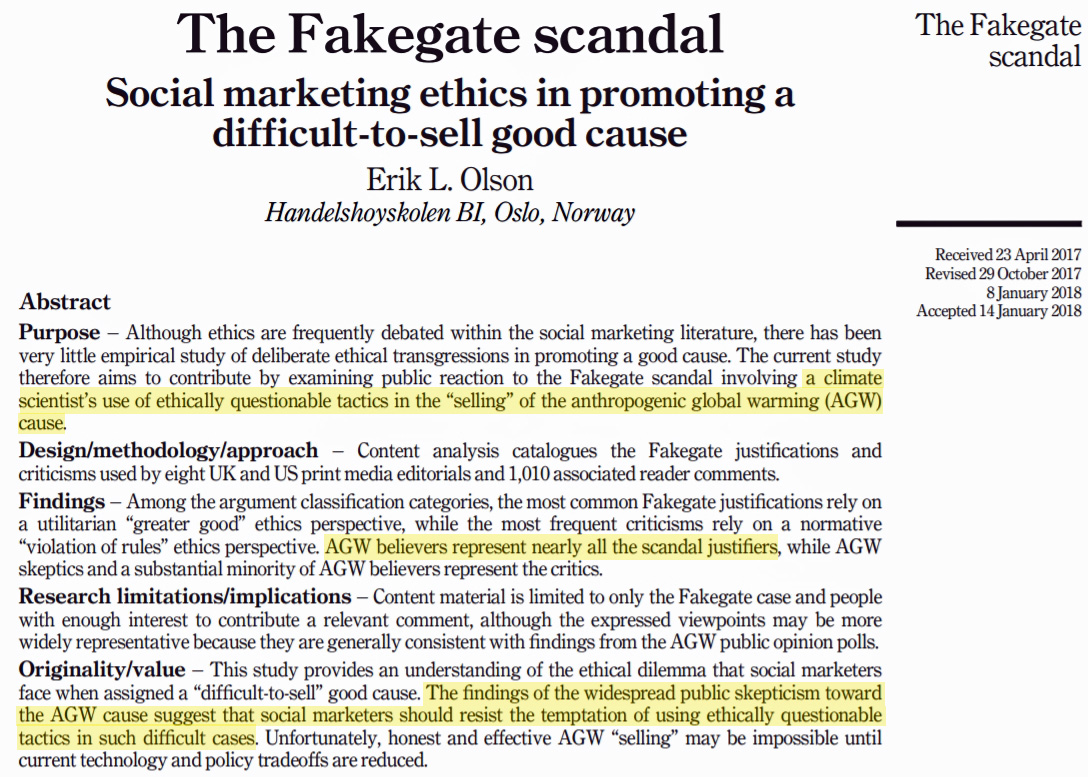 “For example, the past 25 years have witnessed a large number of greatly exaggerated predictions regarding the speed and scope of temperature increases and AGW dangers from a variety of AGW “endorsers,” which have fortunately proven to be false alarms (Bastasch, 2015; Grundmann, 2011; Michaels, 2008; Newman, 2014).  Another ethically questionable example is provided by the Climategate scandal involving members of the climate science community and their attempts to increase public certainty regarding the methods and predictions of “mainstream” climate models by blocking the publication of research not supportive of the AGW paradigm (Curry, 2014; Grundmann, 2011).”

“[C]ommercial marketers are widely criticized and distrusted because they frequently resort to ethically questionable tactics when the marketing assignment involves uncompetitive or unsought products that are difficult to honestly sell (Holden and Cox, 2013; Olson, 1995). .. [T]he use of ethically questionable persuasion techniques by social marketers is more likely to occur when the promoted cause is “difficult to sell” owing to definitional disputes between the marketer and target regarding the “greater good” implications of the promoted behaviors and public policies (Hastings et al., 2004; Holden and Cox, 2013; Spotswood et al., 2011; Von Bergen and Miles, 2015). Yet despite these philosophical discussions on social marketing ethics in the literature, there has been relatively little empirical attention given to the ethical dilemmas that social marketers face when tasked with difficult-to-sell causes such as the AGW paradigm (Freeman, 2009; Pang and Kubacki, 2015).”

“The Fakegate scandal that is the focus of the current research is different than other AGW scandals and ethical missteps, however, because the protagonist publicly admitted to the intentional use of ethically questionable tactics for the purposes of favorably influencing public opinion regarding the AGW cause. Fakegate started with the theft of internal strategy and donor documents from the Heartland Institute, a libertarian think tank and dangerous AGW “competitor” owing to their efforts to educate the public regarding climate model uncertainties and the high economic and political costs of AGW mitigation (Hoffman, 2011). … An analysis of the writing style, content details and errors in the fake document led several bloggers to speculate that the thief and fake document author was Peter Gleick, a climate researcher, environmental think tank president, chairman of a scientific association ethics committee and frequent blogger on climate science and AGW threats (Greenhut, 2012). These publicly discussed suspicions led Gleick to confess and apologize for his use of deception in posing as a Heartland board member to acquire and disseminate the internal documents.”

“Failures provide valuable learning opportunities, and the Fakegate failure demonstrates that social marketers who are unwilling or unable to honestly and persuasively debate the scientific validity and “greater good” of their cause, should not resort to ethically questionable persuasion tactics if they hope to win widespread and lasting trust and support for their social marketing objectives.”