Marc Morano statement: "I have been in regular contact with Dr. Gray for over a decade and he once almost came to testify in front of the U.S. Senate. Gray is also featured in my new book, 'The Politically Incorrect Guide to Climate Change.' Gray states in the book, “The claims of the IPCC are dangerous unscientific nonsense.” The world will miss Gray's passion for science and scientific truth. RIP."

Flashback: UN IPCC Scientist Dr. Vincent Gray: ‘There is not a scrap of evidence in any IPCC reports that human emissions of CO2 have any harmful effect on the climate’ - 'Nobody seems to realise that the most elaborate and comprehensive conflict of interest that has been inflicted on the public is the 'Global Warning" Theory'...I have been an Expert Reviewer on every one of the Reports of IPCC'

Dr Gray passed away last week. He was 96 years old. Vincent was an expert reviewer of every IPCC assessment report to date. He also books published on Climate Change/AGW. This blogger edited his last book – The Global Warming Scam and Climate Change Superscam – and published it on line – HERE. It was subsequently published and is available on Kindle (Here). 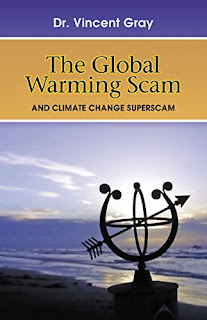 My autobiography Confessions of a Climate Sceptic describes my origins, upbringing, education and scientific career but I am continually subject to disbelief, insult and refusal to be taken seriously. I feel I should summarise them here. At this writing, I am 93 years old and expect this book to be my final word. I have a First Class Honours degree in Physics, Chemistry, Chrystallography and Mathematics and a PhD in Physical Chemistry from Cambridge University, UK. I’ve had a long scientific research career in the UK, France, Canada,  New Zealand and China with well over 100 peer-reviewed scientific papers on a variety of subjects, including climate. I am a Fellow of the New Zealand Institute of Chemistry. I have been an expert reviewer on all of the reports of the International Panel on Climate Change (IPCC) and I am 128 Greenhouse Bulletins and 340 NZ Climate Truth Newsletters,  most of which have appeared on the Internet.

‘The pressure to accept this absurdity is slowly subsiding as it is becoming more and more evident to more and more people that the climate is not controlled in this way, and we must hand the whole subject back to traditional meteorology which has found that the climate is far too complicated to be decided by only one cause, and ‘greenhouse gases’ becomes less prominent all the time’

Yet Another UN IPCC Scientist — Dr. Vincent Gray — speaks out on ClimateGate: ‘I long ago realized that they were faking the whole exercise’

Skeptical UN IPCC Scientist Dr. Vincent Gray: ‘The public, the media and the politicians seem to think that the IPCC ‘projections’ are ‘forecasts’ even when the IPCC denies it’

UN IPCC Expert Reviewer Dr. Vincent Gray’s Comments to the IPCC WG1 AR5 Second Draft: ‘You have failed once more to show that the climate is influenced in any way by changes in emissions of trace gases’

Gray to IPCC: ‘Globally averaged near surface temperature” What nonsense! Nobody has ever measured such a quantity. It would require simultaneous measurements of thermometers situated randomly over the entire earth’s surface, including the oceans.’  – ‘Detection’ and ‘Attribution’ are mechanisms of organised guesswork They provide only speculation, not evidence of cause and effect’

UN IPCC Reviewer Dr. Vincent Gray: CONTROLLING THE SCIENTISTS – ‘Attempts of the IPCC to impose rigid discipline on a large group of scientists to persuade them to claim that human emissions of so-called greenhouse gases harm the climate, without being able to supply convincing evidence, has been a failure’

UN IPCC Expert Reviewer Dr Vincent Gray: ‘The claim that increase of human-induced ‘greenhouse’ gases in the atmosphere would cause “global warming” ran into serious trouble right from the start.’

‘There are theoretical reasons why the average temperature of the earth’s surface cannot be measured. Because of the fact that the sun does not shine for half the time, its variability is non linear. It is impossible to simulate it with any of the mathematical functions used by statisticians and even if this were possible there is a variety of possible averages, such as the arithmetic mean, geometric mean, or the harmonic mean.’

UN IPCC Expert Reviewer Dr. Vincent Gray: ‘There is no correlation whatsoever between carbon dioxide concentration and the temperature at the earth’s surface’

Gray: ‘The IPCC is not an honest independent body but a firmly established political lobby group set up with the task of imposing the global warming theory by any means, controlled by the 195 governments’

Gray: ‘Surely, we are at the beginning of the end. The globe has stopped warming; even when measured by the botched-up biased system that they favour. The Kyoto Protocol is dead. Emissions by former members are in steady decline compared with those from non-members. The support literature has dried up. I used to go to the University every month and photocopy the latest scientific outrage for these Newsletters. The only recent feeble attempt was the rapidly discredited attempt by Marcott to fabricate yet another Hockey Stick’

Has the IPCC ‘predictions’ been correct? UN IPCC’s Dr. Vincent Gray responds: ‘There is a generous uncertainty range and they cover themselves because of ‘the influence of other factors’

Skeptical scientist Dr. Gray: ‘Let me quote from the [IPCC 1990] Executive Summary which is on page xi…They cannot claim that current IPCC practise is capable of *predicting* any future climate, so they grub around in the past to try and pretend it can be done…There were four scenarios given in the 1990 report. All have been abandoned as unrealistic. Amongst other things, they all assumed that there would be no efforts to try and reduce greenhouse gases’

UN IPCC Scientist Dr. Vincent Gray: ‘There is not a scrap of evidence in any IPCC reports that human emissions of CO2 have any harmful effect on the climate’