This has been the global warming scare story of the week, heavily promoted by the usual suspects, including Time, CBS, the Washington Post, the Guardian, the New York Timesand, inevitably, the BBC.

Here is the BBC version:

Antarctica is shedding ice at an accelerating rate.

Satellites monitoring the state of the White Continent indicate some 200 billion tonnes a year are now being lost to the ocean as a result of melting.

This is pushing up global sea levels by 0.6mm annually – a three-fold increase since 2012 when the last such assessment was undertaken.

Scientists report the new numbers in the journal Nature.

Governments will need to take account of the information and its accelerating trend as they plan future defences to protect low-lying coastal communities.

The researchers say the losses are occurring predominantly in the West of the continent, where warm waters are getting under and melting the fronts of glaciers that terminate in the ocean.

“We can’t say when it started – we didn’t collect measurements in the sea back then,” explained Prof Andrew Shepherd, who leads the Ice sheet Mass Balance Inter-comparison Exercise (Imbie).

“But what we can say is that it’s too warm for Antarctica today. It’s about half a degree Celsius warmer than the continent can withstand and it’s melting about five metres of ice from its base each year, and that’s what’s triggering the sea-level contribution that we’re seeing,” he told BBC News.

So it’s over, right? The Warmunists were right, the deniers were wrong and global warming is a super serial crisis we need to deal with NOW not the day after tomorrow…

The first thing to note is that the study is published in Nature, which is alarmist central and therefore to be treated with a degree of skepticism.

If you read the abstract, it’s actually pretty dry and unexciting.

The Antarctic Ice Sheet is an important indicator of climate change and driver of sea-level rise. Here we combine satellite observations of its changing volume, flow and gravitational attraction with modelling of its surface mass balance to show that it lost 2,720 ± 1,390 billion tonnes of ice between 1992 and 2017, which corresponds to an increase in mean sea level of 7.6 ± 3.9 millimetres (errors are one standard deviation). Over this period, ocean-driven melting has caused rates of ice loss from West Antarctica to increase from 53 ± 29 billion to 159 ± 26 billion tonnes per year; ice-shelf collapse has increased the rate of ice loss from the Antarctic Peninsula from 7 ± 13 billion to 33 ± 16 billion tonnes per year. We find large variations in and among model estimates of surface mass balance and glacial isostatic adjustment for East Antarctica, with its average rate of mass gain over the period 1992–2017 (5 ± 46 billion tonnes per year) being the least certain.

But such is the way of climate alarmism is that the scientists involved have to talk up their findings and make them sound scary. Then the mainstream media adds its spin to make them scarier still.

The reality is more prosaic.

Here is what they have actually been doing for the last few thousand years. 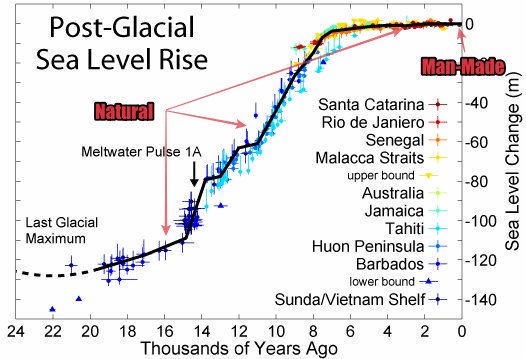 Despite the apocalyptic headline, ice loss has only been contributing about 0.3mm a year to sea level rise, about an inch per century. Given that sea levels have been rising at around 8 inches a century since the 19thC, there is no evidence that this is not a long term phenomenon we are seeing.

Then, again per Homewood, there’s the issue of reliability.

Then there is the question of the accuracy of measurements. A major study by NASA in 2015 discovered that Antarctic ice mass has actually been increasing since 1992, basically because of greater snowfall, and not decreasing as this new study claims.

In reality, measurements of ice mass are not exact and are subject to huge margins of error.

And it’s not as though scientists have records going back long enough (Antarctica is a big, inhospitable place: remember Captain Scott?) to get any proper historical perspective:

Indeed as Shephard himself is forced to admit, we did not start collecting data until 1992. This sort of melting could have been going on for centuries or longer. In fact, another paper published this month by Kingslake et al finds that there has been  extensive retreat and re-advance of the West Antarctic Ice Sheet during the Holocene.

As Shephard also remarks, the melting in West Antarctica is due to the intrusion of warmer water, and therefore nothing at all to do with GHGs or “global warming”. It is highly unlikely that such changes in ocean currents have not happened many times before.

Just to repeat that key point: scientists only been collecting data since the year REM released Automatic for the People. Not really that long ago in the great scheme of things.

Finally, there’s the awkward matter – awkward if you’re a warmist trying to generate climate alarm, that is – of context.

Until you realize how big Antarctica is.

As David Middleton has calculated at Watts Up With That? three trillion metric tons is something the Antarctic can lose quite comfortably.

One of his readers below has done the math on what three trillion metric tons of ice-melt-caused sea rise looks like.

Until they come up with a new one next week.