Warmist model based claim: Climate change on track to cause major insect wipeout

Global warming is on track to cause a major wipeout of insects, compounding already severe losses, according to a new analysis.

Insects are vital to most ecosystems and a widespread collapse would cause extremely far-reaching disruption to life on Earth, the scientists warn. Their research shows that, even with all the carbon cuts already pledged by nations so far, climate change would make almost half of insect habitat unsuitable by the end of the century, with pollinators like bees particularly affected.

However, if climate change could be limited to a temperature rise of 1.5C – the very ambitious goal included in the global Paris agreement – the losses of insects are far lower.

The new research is the most comprehensive to date, analysing the impact of different levels of climate change on the ranges of 115,000 species. It found plants are also heavily affected but that mammals and birds, which can more easily migrate as climate changes, suffered less.

“We showed insects are the most sensitive group,” said Prof Rachel Warren, at the University of East Anglia, who led the new work. “They are important because ecosystems cannot function without insects. They play an absolutely critical role in the food chain.”

“The disruption to our ecosystems if we were to lose that high proportion of our insects would be extremely far-reaching and widespread,” she said. “People should be concerned – humans depend on ecosystems functioning.” Pollination, fertile soils, clean water and more all depend on healthy ecosystems, Warren said. 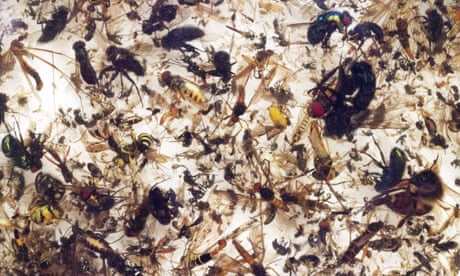 Warning of ‘ecological Armageddon’ after dramatic plunge in insect numbers

In October, scientists warned of “ecological Armageddon” after discovering that the number of flying insects had plunged by three-quarters in the past 25 years in Germany and very likely elsewhere.

“We know that many insects are in rapid decline due to factors such as habitat loss and intensive farming methods,” said Prof Dave Goulson, at the University of Sussex, UK, and not part of the new analysis. “This new study shows that, in the future, these declines would be hugely accelerated by the impacts of climate change, under realistic climate projections. When we add in all the other adverse factors affecting wildlife, all likely to increase as the human population grows, the future for biodiversity on planet Earth looks bleak.”