by Jennifer on May 19, 2018 in Information, News
BACK in 2016, when I asked Peter Ridd if he would write a chapter for the book I was editing I could not possibly have envisaged it could contribute to the end of his thirty-year career as a university professor. 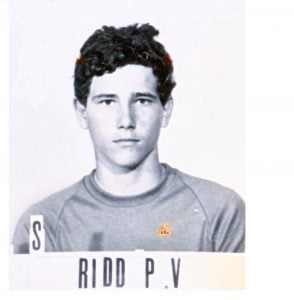 Peter Ridd as a first year undergraduate science student at James Cook University back in 1978 – forty years ago.

Considering that Peter enrolled at James Cook University as an undergraduate back in 1978, he has been associated with that one university for forty years.

Since Peter was fired on 2 May 2018, the university has attempted to remove all trace of this association: scrubbing him completely from their website.

But facts don’t cease to exist because they are removed from a website. The university has never challenged the veracity of Peter’s legitimate claims about the quality of much of the reef science: science on which billions of dollars of taxpayer-funded research is being squandered. These issues are not going away.

Just yesterday (Friday 18 May), Peter lodged papers in the Federal Court. He is going to fight for his job back!

If you care about the truth, science and academic freedom, please donate to help bring this important case to court.

It doesn’t matter how little or how much you donate. Just make sure you are a part of this important effort by donating to Peter’s GoFundMe campaign.

Peter deliberately choose to frame the book chapter about the replication crisis that is sweeping through science.

In this chapter – The Extraordinary Resilience of Great Barrier Reef Coral and Problems with Policy Science – Peter details the major problems with quality assurance when it comes to claims of the imminent demise of the reef.

Policy science concerning the Great Barrier Reef is almost never checked. Over the next few years, Australian governments will spend more than a billion dollars on the Great Barrier Reef; the costs to industry could far exceed this. Yet the keystone research papers have not been subject to proper scrutiny. Instead, there is a total reliance on the demonstrably inadequate peer-review process.

Ex-professor Peter Ridd has also published extensively in the scientific literature on the Great Barrier Reef, including issues with the methodology used to measure calcification rates. In the book he explains:

Like trees, which produce rings as they grow, corals set down a clearly identifiable layer of calcium carbonate skeleton each year, as they grow. The thicknesses and density of the layers can be used to infer calcification rates and are, effectively, a measure of the growth rate. Dr Glenn De’ath and colleagues from the Australian Institute of Marine Science used cores from more than 300 corals, some of which were hundreds of years old, to measure the changes in calcification during the last few hundred years. They claimed there was a precipitous decline in calcification since 1990, as shown in Figure 1.2. 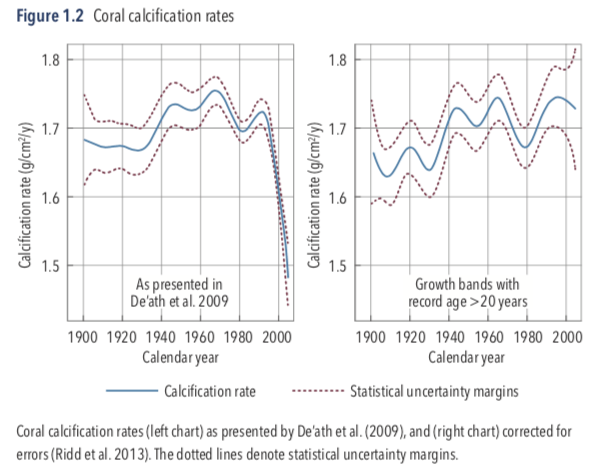 The LHS chart suggests a problem with coral growth rates – but the real problem is with the methodology. When corals of equivalent age are sampled, there has been no decline in growth rates at the Great Barrier Reef – as shown in the RHS chart.

However, I have two issues with their analysis. I published my concerns, and an alternative analysis, in the journal Marine Geology (Ridd et al. 2013). First, there were instrumental errors with the measurements of the coral layers. This was especially the case for the last layer at the surface of the coral, which was often measured as being much smaller than the reality. This forced an apparent drop in the average calcification for the corals that were collected in the early 2000s – falsely implying a recent calcification drop. Second, an ‘age effect’ was not acknowledged. When these two errors are accounted for, the drop in calcification rates disappear, as shown in Figure 1.2.

The problem with the ‘age effect’, mentioned above, arose because in the study De’ath and colleagues included data from corals sampled during two distinct periods and with a different focus; I will refer to these as two campaigns. The first campaign occurred mostly in the 1980s and focused on very large coral specimens, sometimes many metres across. The second campaign occurred in the early 2000s due to the increased interest in the effects of CO2. However, presumably due to cost cutting measures, instead of focusing on the original huge coral colonies, the second campaign measured smaller colonies, many just a few tens of centimetres in diameter.

In summary, the first campaign focused on large old corals, while, in contrast, the second campaign focused on small young corals. The two datasets were then spliced together, and wholly unjustifiable assumptions were implicitly made, but not stated – in particular that there is no age effect on coral growth…

While it would seem reasonable to conclude that the results of the study by D’Olivo et al. would be reported as good news for the Great Barrier Reef, their article in the journal Coral Reefs concluded:

Our new findings nevertheless continue to raise concerns, with the inner-shelf reefs continuing to show long-term declines in calcification consistent with increased disturbance from land-based effects. In contrast, the more ‘pristine’ mid- and outer-shelf reefs appear to be undergoing a transition from increasing to decreasing rates of calcification, possibly reflecting the effects of CO2-driven climate change.

Imaginatively, this shift from ‘increasing’ to ‘decreasing’ seems to be based on an insignificant fall in the calcification rate in some of the mid-shelf reefs in the last two years of the 65-year dataset.

Why did the authors concentrate on this when their data shows that the reef is growing about 10% faster than it did in the 1940s?

James Cook university could have used the chapter as an opportunity to start a much-needed discussion about policy, funding and the critical importance of the scientific method. Instead, Peter was first censored by the University – and now he has been fired.

When I first blogged on this back in February, Peter needed to raise A$95,000 to fight the censure.

This was achieved through an extraordinary effort, backed by Anthony Watts, Joanne Nova, John Roskam and so many others.

To be clear, the university is not questioning the veracity of what ex-professor Ridd has written, but rather his right to say this publicly. In particular, the university is claiming that he has not been collegial and continues to speak-out even after he was told to desist.

New allegations have been built on the original misconduct charges that I detailed back in February. The core issue continues to be Peter’s right to keep talking – including so that he can defend himself.

In particular, the university objects to the original GoFundMe campaign (that Peter has just reopened) because it breaches claimed confidentiality provisions in Peter’s employment agreement. The university claims that Peter Ridd was not allowed to talk about their action against him. Peter disputes this.

Of course, if Peter had gone along with all of this, he would have been unable to raise funds to get legal advice – to defend himself! All of the documentation is now being made public – all of this information, and more can be found at Peter’s new website.

Together, let’s fight this!

The Institute of Public Affairs published Climate Change, The Facts 2017, and continues to support Peter’s right to speak the truth. For media and comment contact Evan Mulholland on 0405 140 780, or at [email protected]

Buy the book if you haven’t already: this is another way of showing your support. 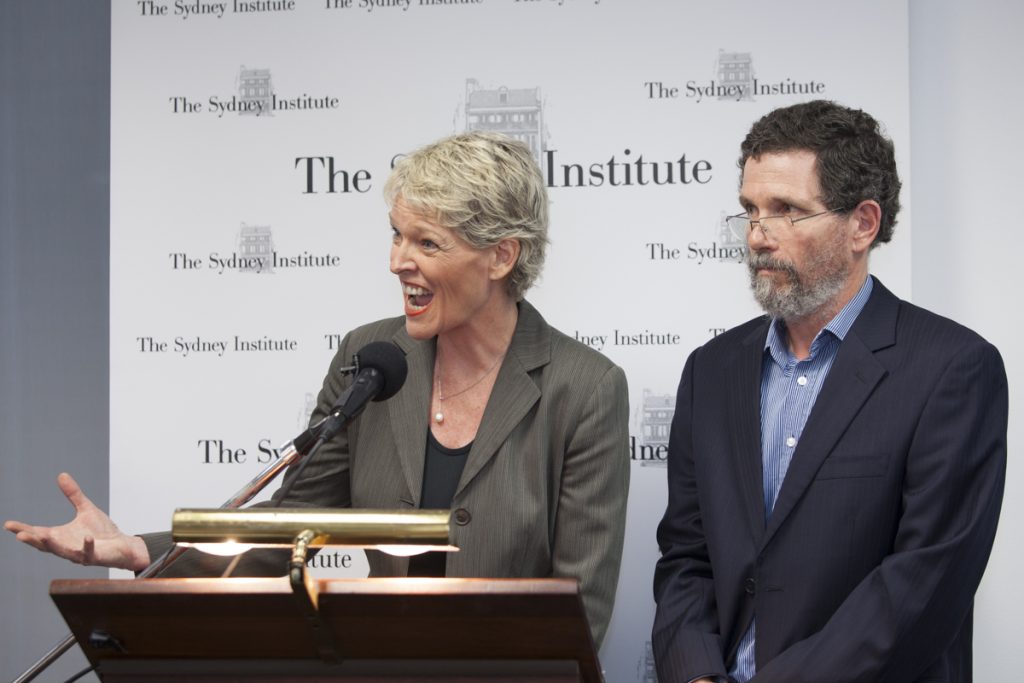 The most important thing is to not be silenced, shout about this! I received an email last week: “Bought Climate Change, The Facts 2017, as requested, to support Peter Ridd. I’m not making any friends at dinner parties at the moment. Stuff ’em.”