Calif. Gov. Jerry Brown: 'This is a horror' - 'We’re going to have widespread disruption, more conflicts, more terrorism, more insecurity because of climate disruption. The prospect is 3 billion people on this planet will be subject to fatal lethal heat events – 3 billion – and 1 billion will be subjected to vector diseases that they’re not now subject to now.' 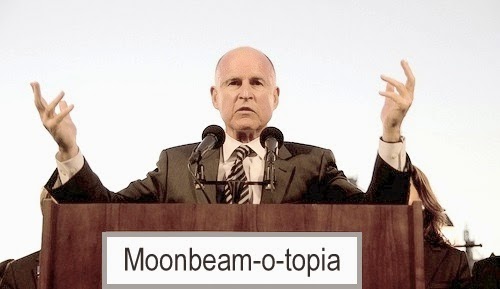 (CNSNews.com) – California Gov. Jerry Brown predicted that if carbon emissions aren’t reduced, billions of people will die from “heat events,” and one billion will be subjected to vector diseases.

“When you pick up the paper or turn on cable news, you’d think it’s another planet. It’s all about the nonsense of Washington, and carbon emissions are growing, and we’ve got to radically turn that around, or the migrations you’re seeing now are going to be child’s play,” Brown told reporters Tuesday at the National Press Club in Washington, D.C.

“We’re going to have widespread disruption, more conflicts, more terrorism, more insecurity because of climate disruption. The prospect is 3 billion people on this planet will be subject to fatal lethal heat events – 3 billion – and 1 billion will be subjected to vector diseases that they’re not now subject to now,” he said. “This is a horror.”

Brown was among a number of governors who established an alliance to reduce climate change in response to President Donald Trump’s decision to withdraw from the Paris Climate Accord.

When asked what states can reasonably do about climate change, Brown said, “California has adopted an extension of this cap and trade program, which will give us 20 percent of our greenhouse gas reduction. That’s a very important measure that would have gone out of existence in 2020, and that measure was voted by Republicans. It wouldn’t have passed without Republican support.”

“So we’ve done that. We’re revising our building standards. We have a scoping plan for our entire greenhouse gas emission strategy that’s going forward. Other states, I think New Jersey is considering significant changes, so there’s a lot of possibilities going on in different states and different provinces around the world,” he said.

“We have an Under Two Coalition – keep the temperature under two degrees Centigrade from growing, and we have over 200 signatories that represent more than a third of the world’s wealth. Is it enough? No. Is the world on the right track? No. Does disaster loom? Yes, and I’m doing what I can to motivate people. People are asleep,” Brown said.

“This is a horror, and that’s why I spend so much time working on climate change even though it is not a big, hot political issue – not in California, certainly not in Washington, and unfortunately, not in a number of other countries, but that doesn’t mean it isn’t a big problem. It’s a huge problem, and there’s just two big topics,” the governor said.

“I don’t see any evidence in the paper. One is the risk of nuclear destruction or incident. William Perry wrote a book, ‘My Journey at the Nuclear Brink,’ which I reviewed. He said we’re more in danger now than we were at the height of the Cold War. That’s been repeated by other people. That’s a serious matter, and yet we have very little discussion going on with Russia with climate change – a serious matter, what’s going on,” he said.