In 2017, the case for polar bear alarm has grown so weak that it appeared even climate activists were finally abandoning the animal as an icon for their cause. “There have been no new reports of falling polar bear numbers, and images of fat, healthy polar bears abound,” paleozoologist Susan Crockford noted. “A number of recent climate change reports even failed to mention polar bears in their discussion of Arctic sea ice decline...Crockford, “Even Al Gore seems to have forgotten to include the plight of polar bears in his newest climate change movie. The polar bear played a prominent role in his 2007 documentary, An Inconvenient Truth, the polar bear example was left out of [2017’s] An Inconvenient Sequel: Truth to Power. It doesn’t even get a mention. After years of campaigners’ and researchers’ claims that populations were in terminal decline, the ‘canary in the coal mine’ has been retired.”

The New York Times is circling the wagons for the global warming establishment to smear and dismiss skeptical scientists and research showing that polar bears are not threatened by “global warming.” See: NYT: “Climate Change Denialists Say Polar Bears Are Fine. Scientists Are Pushing Back”  The Times cites the usual climate campaigner suspects like environmental activist Michael Oppenheimer, a recipient of Big Hollywood funding (Barbra Streisand) and a UN lead author.

One skeptical scientist Dr. Susan Crockford is fighting back at the New York Times. See: “Climate mauling, polar bears, and the self-inflicted wounds of the self-righteous” –  Crockford: “The unprofessional attack on me and my work distracts from that objective, and the continual use of the pejorative “denier/denial” label is combative and unnecessary.”

The new best selling book, “The Politically Incorrect Guide to Climate Change,” reveals the polar bear climate scare is collapsing and even former Vice President Al Gore seems to have abandoned using the iconic animal as a symbol for his scare campaign.

The book has also been getting extremely positive reviews with a nearly 5 star average at Amazon:

The Polar Bears
The photogenic polar bear has been the icon for the modern global warming movement. “They are looking for poster children,” explains geologist Bob Carter. “It suits that advertising purpose. It has nothing to do with science.” The fact is that polar bear populations are at or near historic highs. Scientists point out that the computer models predicting polar bear population collapse simply do not reflect reality or account for the adaptability of these animals. “Polar bears have survived several episodes of much warmer climate over the last 10,000 years than exists today,” evolutionary biologist and paleozoologist Susan Crockford of the University of Victoria explains. “There is no evidence to suggest that the polar bear or its food supply is in danger of disappearing entirely with increased Arctic warming, regardless of the dire fairy-tale scenarios predicted by computer models.” As her research shows, “Polar bears have not been harmed by sea ice declines in summer.” And so she rejects predictions of doom: “While the decline in ice extent is greatest in September, all evidence suggests this is the least important month of the year for polar bears—the yearly ice minimum in September occurs after the critical spring/summer feeding period, after the spring/summer mating period and well before the winter birth of cubs,” she added.

The U.S. Fish and Wildlife Service has estimated that the polar bear population was as low as 5,000 to 10,000 bears in the 1950s and 1960s. A 2002 U.S. Geological Survey of wildlife in the Arctic Refuge Coastal Plain noted that the polar bear populations “may now be near historic highs.” And in 2016, the International Union for the Conservation of Nature estimated the current polar bear which according to Crockford is “the highest estimate in 50 years.”

As Crockford wrote in 2016, “So far there is no convincing evidence that any unnatural harm has come to them. Indeed, global population size appears to have grown slightly since 1993, as the maximum estimated number was 28,370 in 1993 but rose to 31,000.”

Climatologist Judith Curry has said, “It seems like the polar bears are doing well and have managed to evolve and adapt over a very long time. It’s not clear what we’re doing up in the Arctic that’s particularly jeopardizing them.”

According to geologist Don Easterbrook, “There are five times as many polar bears now as they were in the 1970s so doesn’t look like they are hurting too much. And I can also tell you on a factual basis that the past 10,000 years we’ve had temperatures that were…a half to 5° warmer and Greenland and the polar bears survive[d] that so there’s not any problem now.”

In 2008, scientists spoke out publicly against the polar bear climate fears and I wrote a report for the U.S. Senate Environment and Public Works Committee. What follows is based up on that report.

Award-winning quaternary geologist Ólafur Ingólfsson, a professor at the University of Iceland, has also rejected bear fears. “We have this specimen that confirms the polar bear was a morphologically distinct species at least 100,000 years ago, and this basically means that the polar bear has already survived one interglacial period,” said Ingólfsson, who has conducted extensive expeditions and field research in both the Arctic and Antarctic. “This is telling us that despite the on-going warming in the Arctic today, maybe we don’t have to be quite so worried about the polar bear,” he added.

Biologist Matthew Cronin, a research professor at the School of Natural Resources and Agricultural Sciences at the University of Alaska Fairbanks, rejected climate fears as well. “Polar bear populations are generally healthy and have increased worldwide over the last few decades,” Cronin said.

Biologist Josef Reichholf, who heads the Vertebrates Department at the National Zoological Collection in Munich is also skeptical of bear fears. “In warmer regions it takes far less effort to ensure survival,” Reichholf said. “How did the polar bear survive the last warm period? Look at the polar bear’s close relative, the brown bear. It is found across a broad geographic region, ranging from Europe across the Near East and North Asia, to Canada and the United States. Whether bears survive will depend on human beings, not the climate.”

The Nunavut government in Canada is not concerned about the fate of polar bear populations. Territorial Environment Minister Daniel Shewchuk said, “Through direct consultation, [Inuit communities] are unanimous in their belief that polar bears have not declined…. Based on hunter observations, polar bears are presently still healthy and abundant across Nunavut—and for that reason, not a species of special concern.”

The Los Angeles Times reported in 2012, “Doomsday predictions of the polar bear’s demise tend to draw an Inuit guffaw here in Nunavut, the remote Arctic territory where polar bears in some places outnumber people….Heart-rending pictures of polar bears clinging to tiny islands of ice elicit nothing but derision.”

Internationally known forecasting pioneer J. Scott Armstrong of the Wharton School at the Ivy League University of Pennsylvania and his colleague, forecasting expert Kesten Green of Monash University in Australia, coauthored a January 27, 2008, paper with Harvard astrophysicist Dr. Willie Soon, which found that polar bear extinction predictions violate “scientific forecasting procedures.” As they explained, their “study analyzed the methodology behind key polar bear population prediction and found that one of the two key reports in support of listing the bears had ‘extrapolated nearly 100 years into the future on the basis of only five years data—and data for these years were of doubtful validity.”

Polar bear expert Dennis Compayre, formerly of the conservation group Polar Bears International, who has studied the bears in their natural habitat for almost thirty years, weighs in. “I tell you there are as many bears here now as there were when I was a kid,” Compayre, author of the 2015 book on polar bears Waiting for Dancer, said. “Churchill [in Northern Canada] is full of these scientists going on about vanishing bears and thinner bears. They come here preaching doom, but I question whether some of them really have the bears’ best interests at heart.”

Famed environmental campaigner David Bellamy—botanist, former lecturer at Durham University, and host of a popular UK TV series on wildlife—protested, “Why scare the families of the world with tales that polar bears are heading for extinction when there is good evidence that there are now twice as many of these iconic animals, most doing well in the Arctic, than there were 20 years ago?”

In 2017, the case for polar bear alarm has grown so weak that it appeared even climate activists were finally abandoning the animal as an icon for their cause. “There have been no new reports of falling polar bear numbers, and images of fat, healthy polar bears abound,” paleozoologist Susan Crockford noted. “A number of recent climate change reports even failed to mention polar bears in their discussion of Arctic sea ice decline. The polar bear does not get mentioned once in the draft of the US Climate Science Special Report, even in the fifty page discussion on changes in the Arctic. And NOAA’s annual Arctic Report Card has not mentioned the polar bear since 2014, in spite of highlighting the dangers faced by bear populations in every issue since 2008.” 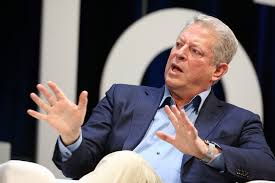 According to Crockford, “Even Al Gore seems to have forgotten to include the plight of polar bears in his newest climate change movie. The polar bear played a prominent role in his 2007 documentary, An Inconvenient Truth, the polar bear example was left out of [2017’s] An Inconvenient Sequel: Truth to Power. It doesn’t even get a mention. After years of campaigners’ and researchers’ claims that populations were in terminal decline, the ‘canary in the coal mine’ has been retired.”

★★★★★
“Extremely Unhelpful”
“Polar bear expert Mitch Taylor barred from conference over ‘extremely unhelpful’ skeptical global warming view,” reported the UK Telegraph in 2009. “Canadian biologist Mitchell Taylor, the former director of wildlife research with the government of Nunavut who teaches at Lakehead University in Canada, has also debunked the warmists’ polar bear claims.” According to Taylor, the bears “appear to be as abundant and as productive as ever, in most populations.”

But a meeting of the Polar Bear Specialist Group refused to allow Taylor to attend. He “was voted down by its members because of his views on global warming. The chairman, Dr Andy Derocher, a former university pupil of Dr Taylor’s, frankly explained in an email . . .that his rejection had nothing to do with his undoubted expertise on polar bears: ‘it was the position you’ve taken on global warming that brought opposition.’”

★★★★★
Porky the Polar Bear
A 2015 population survey of polar bears found that key populations had increased 42 percent over the past eleven years and
noted that some of the bears are “as fat as pigs.”