Rush Limbaugh: I Just Hope Scott Pruitt Hangs in at EPA – ‘When you’re taking a lot of flak, you must be over the target’

RUSH: Have you noticed how every political gun the Democrats and the media have is all of a sudden focused on Todd Pruitt at the EPA, the Environmental Protection Agency? You know, there’s an old saying — and you military people will, of course, nod your heads at this. “When you’re taking a lot of flak, you must be over the target.” Well, I think Scott Pruitt is over the target. Let me tell you what Scott Pruitt’s doing. Scott Pruitt is himself unraveling a whole lot of regulations that Obama’s EPA implemented.

Now, the former administrator of the EPA, Gina somebody — can’t remember her last name — Obama put her in office, and she is out there complaining about Pruitt because Pruitt is specifically unraveling things that she and she alone did. And she’s complaining that administrators and bureaucrats can’t just go in willy-nilly and strike out things they don’t like. It’s exactly what she did though. 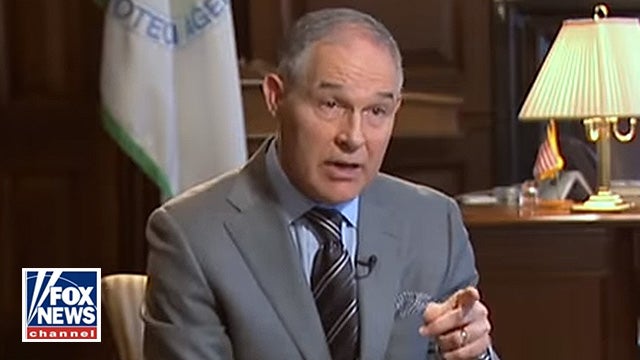 When she was chairman of the EPA she started writing regulations left and right without even the agreement of the whole agency. Not that she needed it, ’cause they were all like-minded leftists. But none of it had to go through Congress. None of it passed as legislation must. And so now Scott Pruitt, they’re focusing on this guy, condos that he wants to buy, furniture he wanted to rent, how he travels privately, running around on jets. They are launching everything they’ve got at this guy.

None of these things are true, of course, but that’s their worldview. And one thing that Pruitt’s doing that’s got them just hog-tied, he’s relaxing all of these mileage restrictions that the left has placed on automobiles and engines and so forth. And he’s basically just taking a knife and whacking things from the EPA that were implemented during the eight years of Obama.

And he has become, outside of Trump, the single biggest target of the American left. Let’s go to the audio sound bites. He was on Fox News last night, and he was being interview by Ed Henry. He said, “If you’re committed to the Trump agenda, why do you go around the president and the White House and give pay raises to two staffers.”

PRUITT: I did not. My staff did and I found out about that yesterday and I changed it.

HENRY: Is somebody being fired for that?

PRUITT: That should not have been done.

HENRY: So who did it?

PRUITT: There will be some accountability.

HENRY: A career person or a political person?

PRUITt: I found out about this yesterday, and I corrected the action. So we are in the process of finding out how it took place and correcting it.

HENRY: So hang on. Both of these staffers who got these large pay raises are friends of yours, I believe from Oklahoma, right?

PRUITT: They are staffers here in the agency.

HENRY: They’re friends of yours?

HENRY: And you didn’t know that they got these large pay raises?

PRUITT: I did not know that they got the pay raises until yesterday.

RUSH: So apparently a couple people got a pay raise he didn’t know about it. This is the thin, shallow gruel they’re using to go after him. It’s even Fox News. So Ed Henry says, “Well, look, one of them got a pay raise of $28,000. The other was $56,000. Do you know what the median income in this country is?”

HENRY: So one of your friends from Oklahoma got a pay raise that’s the medium income…

HENRY So you stopped it.

HENRY: But are you embarrassed that…

RUSH: Let me ask a question. You know, they’re going after Pruitt, how come Strzok and Lisa Page haven’t been canned? How come they are still getting every benefit, every perk and their salaries even though they’ve been demoted and reassigned, why are they still even working there? See, this is how we lose focus of this stuff.

Oh, so now all of a sudden we’re gonna be concerned with how much money federal employees get? I thought we didn’t want to do government shutdowns because federal employees would miss Thanksgiving and Christmas turkeys and it just wouldn’t be fair. Anyway, Pruitt is claiming he reversed these excessive pay raises when he found out they happened.