New Study By German Physicists Concludes We Can Expect Climate Cooling For Next 50 Years!

In a just published study in The Open Atmospheric Science Journal here, German scientists Horst-Joachim Lüdecke and Carl-Otto Weiss have used a large number of temperature proxies worldwide to construct a global temperature mean over the last 2000 years, dubbed G7, in order to find out more about the sun’s role on climate change.

Their results drop a huge surprise on the laps of scientists who have long believed the earth is warming due to human-emitted CO2.

The analysis by the German scientists shows the strongest climate cycle components as 1000, 460, and 190-year periods. The G7 global temperature extrema coincide with the Roman, Medieval, and present optima, as well as the well-known minimum of AD 1450 during the Little Ice Age.

Using further complex analyses, they constructed a representation of G7, which shows a remarkable Pearson correlation of 0.84 with the 31-year running average of G7.

The authors used extensive local temperature proxy data [2 – 6] together with Britain’s Hadley CRU temperature records since 1870 and the recent satellite measurements, and combined them to make up the global temperature time series G7 for the last 2000 years. 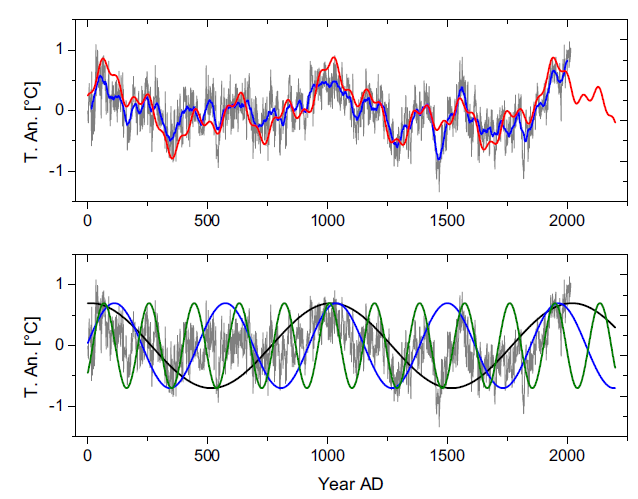 In accordance to the definition of climate, the blue curve in the paper’s Fig. 3, shown above, depicts the climate history as the 30-year running average of the grey curve. Noteworthy, the historically known temperature extrema are well reproduced by the blue climate curve: The Roman Optimum (~0 AD), the Medieval Optimum (~1000 AD), the Present Optimum, as well as the Little Ice Age (~1500 AD),

Also the pronounced minimum of 1450 AD, when the vines in southern France were killed by cold. Also clearly shown by the climate curve is the warming from 1850 to 1995.

The detailed analysis of the local records show in general a multitude of peaks, the authors say, and the G7 however shows only 3 dominant peaks, which correspond to cycles known from local studies, of approx. 1000, 500, 200-year periods. The combination of local records to a global record apparently averages out local cycles and emphasizes global cycles.

In particular the sum of the three cycles shows the temperature increase from 1850 to 1995 as a result of the three natural cycles, the German researchers say, adding: “Thus one can conclude that CO2 plays only a minor role (if any) for the global climate.”