What A Mess! Spiegel Reveals Scientists Don’t Know Real Temperature Of The Planet

The Germany-based European Institute For Climate and Energy (EIKE) alerts here that it is now obvious nobody really knows what the real mean global temperature is, and that claims that the planet is the hottest it’s been since measurements began are not making any sense.

For decades it had been assumed that the globe’s normal 20th century mean temperature was 15°C. But suddenly this year it is reported all over the media that 2016 reached a new record: 14.8°C!

ZDF weather moderator Benjamin Stöwe announced in January, 2017, that at 14.8°C 2016 had been the “hottest year” since measurements began. It’s no typo. Image: ZDF

In 1995 Spiegel and many others, citing James Hansen, reported that the global temperature had reached a “record” 15.4°C!

This led EIKE Vice President Michael Limburg to write: “The warmest year since the start of measurements is revealed to be significantly cooler than the 1995 mean value, which was 15.4°C.”

Readers by now are certainly asking themselves what the hell is going on here!

It turns out that researchers of the Klimamanifestes von Heiligenroth put out a video that examines the absolute temperature value of the globe instead of the anomaly. And what they found in the literature, Limburg writes, “is something astonishing“:

The video here sums up the history of the normal absolute global mean temperature, which for decades had been in fact assumed to be 15°C. Here’s the chronology of what literature kept stating in the past:

Up to 1995 the normal global mean temperature had always been assumed to be 15°C and its rise to 15.5°C was considered a sign of rapid warming.

After 1995 the chaos surrounding the determination of the absolute mean global temperature seems to begin, and no one knows what happened. Today the WMO and ZDF German television are suddenly telling the public that the global temperature in 2016 was 14.8°C, “a new record”!

With all the confusion since 1995, Spiegel in its print edition in 2015 dropped altogether the absolute temperature and switched to using the mean temperature anomaly, and this time from a whole new data source: Japan Meteorological Agency. The main thing was to show readers a rapidly increasing temperatures, details and contradictions be damned. 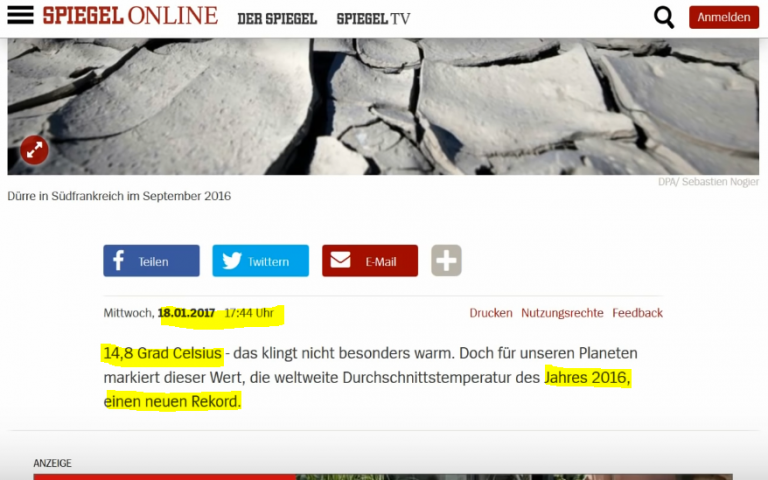 Unwittingly, Spiegel has in effect exposed the widespread confusion concerning absolute global mean temperature and the fact that it seems to have been rolled back 1°C, from 15°C to 14°C. It seems no one knows what it really is.

After Spiegel editor Marco Evers had been asked repeatedly by e-mail to explain what was going on, he tersely wrote back (see below) that he saw “no reason to pursue the correspondence further” and that they relied on “peer-reviewed literature, consensus documents from institutions like the IPCC, as well as NASA and the WMO“. 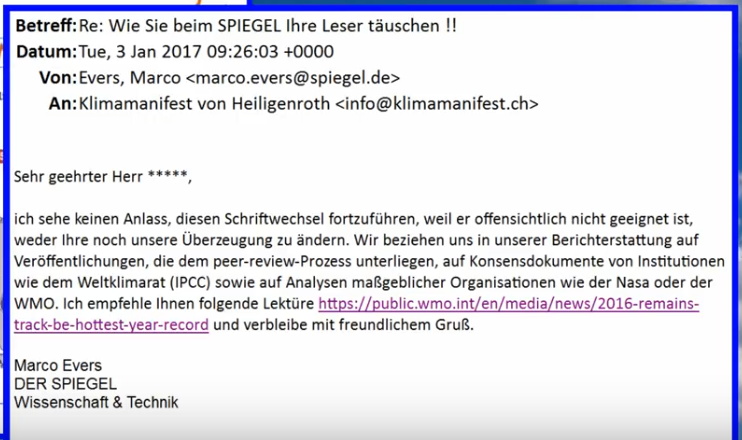 Obviously there’s complete confusion as to what the globe’s absolute mean temperature should be. Depending on the source, it is either 14.8°C (WMO), or 15.8°C (NASA). Here we are talking about a whole degree difference from institutions that claim the ability to measure global temperature down to a few hundredths of a degree.

Would the real temperature please stand up!

It’s such a mess that in its April 1, 2017, edition Spiegel even stopped showing a temperature chart altogether when reporting on the “new 2016 record”, choosing instead to simply bang on about the “hottest year ever”, the Klimamanifest video tells us.