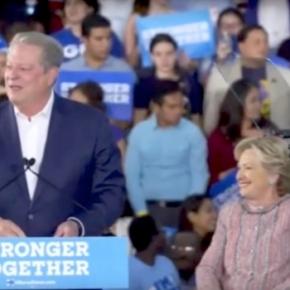 Former Vice President Al Gore has jumped immediately into the climate fray following #Donald Trump’s historic election on Tuesday with a statement released yesterday on his Climate Reality website. He writes, “Our collective efforts are dependent not on politics or ideology — or elections — but on our commitment to each other, to the health of our planet and to a sustainable future for all.”

He asked people not to give up hope and he was “optimistic” they would solve the climate crisis. Trump’s election was a huge setback for Big Green and climate doomsters, who view the election’s outcome as sounding the death knell for planet Earth. Anti-fossil fuel groups are already threatening to sue the Trump administration.

“Last night, President-elect Trump said he wanted to be a president for all Americans. In that spirit,” Gore wrote, “I hope that he will work with the overwhelming majority” of people who think climate change is the “greatest threat we face as a nation.” Unfortunately, most people believe the economy is in jeopardy, and not the climate. That’s according to polls done by Gallup, Pew Research, and the United Nations.

“In that spirit, I hope that he will work with the overwhelming majority of us who believe that the climate crisis is the greatest threat we face as a nation,” Gore wrote.

Trump said throughout his campaign that he would “scrap” any environmental regulations that harmed economic growth or slashed jobs. He also said he would work to save the coal industry using carbon-scrubbing technology and carbon capture and storage (CCS). Many believe #Hillary Clinton lost the election because blue-collar rural voters turned out in droves to vote for the energy-friendly Trump. Coal and other stocks rebounded to their highest levels in history yesterday.

Throughout his campaign, Trump said he would abandon or renegotiate the Paris Climate Agreement, a non-binding accord to reduce carbon dioxide emissions and signed by nearly 200 nations. But the single largest complaint Trump heard while campaigning was how the Obama administration has rolled out hundreds of thousands of #Government regulations that hamper economic growth and stifle business.

Gore wrote of the Paris climate accord: “We knew this work would not be easy—indeed, more would be required.” The U.S. trails behind China in greenhouse gas emissions. China is also exempt from the climate accord until 2030 and has already ramped up coal-fired power plant production. But because of fracking, many power plants are turning to cheap and plentiful natural gas, which has helped the U.S. inadvertently reach some of its climate goals.