Morning Consult poll of 1999 Americans: 'Americans — at least, those surveyed in our poll — are more afraid of clowns than a possible terrorist attack, a family member dying, climate change, biological warfare, and the always-terrifying Obamacare.' 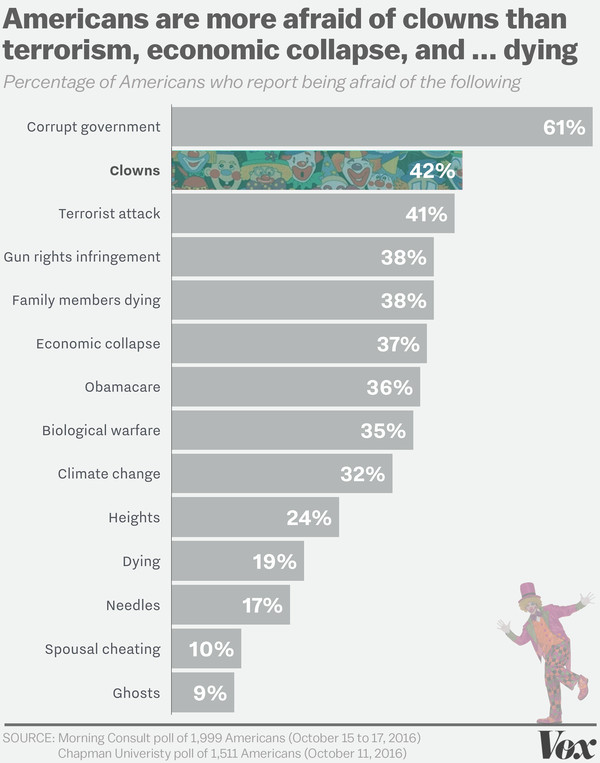 Americans are more afraid of clowns than climate change, terrorism, and … death

We live in scary times.

But in the eyes of our citizens, there is a graver threat at hand: clowns.

In a poll we conducted with Morning Consult last week, 42 percent of Americans said they were, in some capacity, afraid of clowns. Among voters ages 18 to 29, nearly one in three admitted to at least a minor case of coulrophobia — fear of clowns.

The poll, conducted October 15 to 17, comes amid the great clown scare of 2016: Since August, more than 100 “suspicious” clown sightings have been reported across the US, from Seattle to Bangor, Maine.

We get it: Clowns are creepy. Especially when lingering in empty parking lots at 3:30 in the morning, holding black balloons. But are they scarier than real threats, like climate change, economic hardship, or the death of loved ones?

According to Americans, yes. Yes, they are.

We compared the results of our poll with a poll recently conducted by Chapman University, which asked 1,511 Americans to identify their greatest fears from a list of topics. Clowns outranked every single fear, save for “government corruption.” (Note that our poll and the Chapman poll had slightly different answer options: Chapman’s had “very afraid,” “afraid,” and “a little afraid,” while our poll had “very afraid,” “somewhat afraid,” and “a little afraid.”)

Americans — at least, those surveyed in our poll — are more afraid of clowns than a possible terrorist attack, a family member dying, climate change, biological warfare, and the always-terrifying Obamacare.