The United Nations has refused to accredit three of our journalists, blacklisting us from covering the upcoming global warming conference in Marrakech, Morocco.

These are total pros, with years of journalistic experience amongst them.

Here’s the UN’s one-line excuse: we are “advocacy journalists”, a term they do not define and has not to our knowledge been used by the UN before. They don’t even have the courage to sign their mealy-mouthed rejection letter. 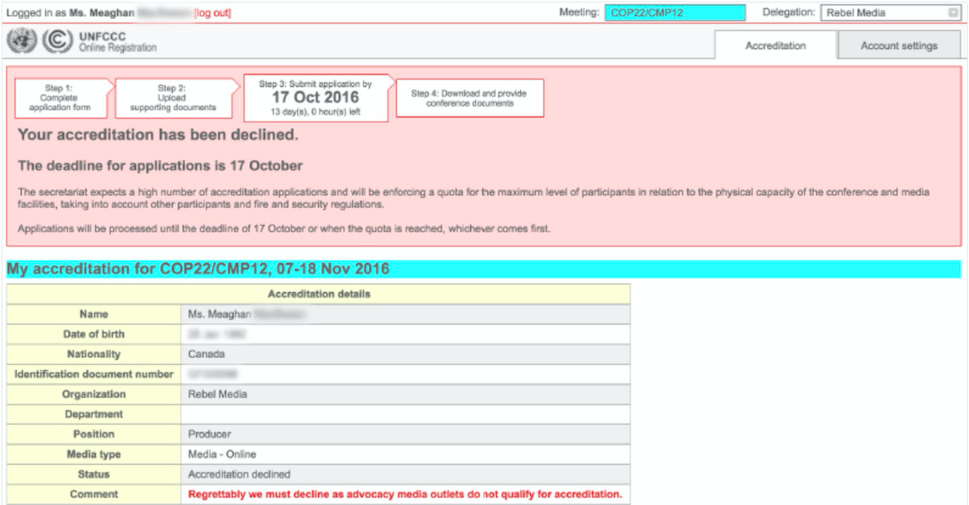 Perhaps the UN means “opinion journalists”. But opinion journalism is a legitimate type of journalism, and comprised a large proportion of the 3,000 journalists who covered last year’s UN global warming conference in France, and will cover this year’s in Morocco.

They’ve just made up the excuse. Because if we were indeed being blacklisted because we hold a point of view, how can the UN approve journalists who are literally paid propagandists for authoritarian regimes, like China’s Xinhua and CCTV, and even Qatar’s Al Jazeera and Russia’s RT?

Many independent western media have an explicit advocacy orientation too, especially on the subject of global warming, including online outlets like Vice, Huffington Post and Buzzfeed.

The UN even welcomes global warming lobby groups, including “community organizers” posing as journalists. Greenpeace-style blogs, like Canada’s own DeSmog Blog attend in full advocacy mode, as well as other small websites like The Tyee and the Vancouver Observer, both supported by Tides.

And that’s all fine – the United Nations’ own Declaration of Human Rights says “Everyone has the right to freedom of opinion and expression; this right includes freedom to hold opinions without interference and to seek, receive and impart information and ideas through any media and regardless of frontiers.”

The UN is breaking its own rules by denying us those same rights. That’s pretty much how they roll over there — after all, it’s an organization where Russia and China have a veto at the security council, and where dictatorships like Saudi Arabia sit on the human rights council. So they’re treating us like they’d treat journalists in Iran or Cuba.

This has happened before. Earlier this year, when Sheila went to a press conference in Edmonton with Justin Trudeau and Rachel Notley, she was met by an armed sheriff blocking her from the Alberta Legislature. It was a scandal, and Notley backed down only in the face of national condemnation.

But Notley, although she’s a bully, still has to operate in a democracy. But the UN bureaucrats who have blacklisted us are anonymous. And they don’t have to worry about stuffy things like democratic accountability. The UN has not even replied to our lawyer’s polite requests for an explanation. Three non-partisan journalism NGOs – PEN Canada, The Canadian Association of Journalists and Canadian Journalists for Free Expression – have each written letters to the UN in support of our application. They have been ignored as well.

Here are copies of our lawyer’s letters, and the letters of support from the three journalism NGOs: