Celebrity physicist Brian Cox misled the ABC TV Q&A audience on at least 3 points-of-fact on Monday night. This is typical of the direction that much of science is taking. Richard Horton, the current editor of the medical journal, The Lancet, recently stated that, “The case against science is straightforward: much of the scientific literature, perhaps half, may simply be untrue.” 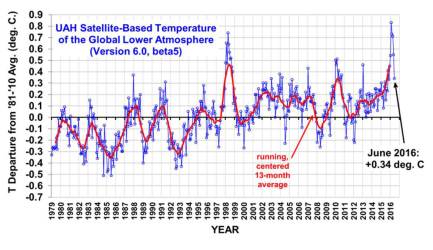 Firstly, Cox displayed an out-of-date NASA chart of remodelled global temperatures as proof that we have catastrophic climate change caused by industrial pollution. Another panellist on the program, One Nation Senator Malcolm Roberts, tried to raise the issue of cause and effect: querying whether there really was a link between rising temperature and carbon dioxide. This is generally accepted without question. But interestingly – beyond experiments undertaken by a chemist over 100 years ago – there is no real proof beyond unreliable computer simulation models.

Indeed, in 2006, John Nicol (a former Dean of Science at James Cook University) wrote to Penny Whetton (then meteorologist-in-charge of the climate science stream at CSIRO) asking if she could provide him with copies notes, internal reports, references (“peer reviewed” of course) which would provide details of the physics behind the hypothesis of global warming. She wrote back immediately promising to find some – which he thought was odd since he had assumed her office was stacked-to-the-ceiling with such literature.

Whetton even went to the trouble of contacting other colleagues – one of whom sent Nicol an inconsequential article in a Polish journal. After eighteen months of their exchanging letters and all of her promises to be helpful, all she could finally offer was the “scientific” section of “Climate Change in Australia 2007”. There, to Nicol’s amazement he found nothing apart from the oft quoted: “We believe that most of the increase in global temperatures during the second half of the 20th century was very likely due to increases in the concentration of atmospheric carbon dioxide”.

“Believe”, “most”, and “very likely” are jargon, perhaps meaning “we don’t have a clue”.

The chart Cox held up on Monday night – now all-over-the-internet as proof of global warming – essentially represents a remodelling of observed temperature measurements to confirm a belief, that we most likely have catastrophic global warming.

The accurate UAH satellite record shows a spike in temperatures in 1997-1998 associated with the El Nino back then, followed by a long pause of about 17 years, before the recent spike at the end of 2015-beginning of 2016. The recent spike was also caused by an El Nino event. Global-temperatures have been plummeting since March, and are now almost back to pause-levels. Indeed, Roberts was more correct than Cox, when he claimed there had been no warming for about 21 years – despite the rise in atmospheric levels of carbon dioxide.

The second misleading statement from Cox on Monday night concerned the nature of the modern sceptic – often harshly labelled a denier. Cox suggested that sceptics were the type of people that would even deny the moon-landing. In making this claim he was no doubt alluding to research, since discredited, funded by the Australian Research Council, that attempted to draw a link between scepticism of anthropogenic global warming and believing in conspiracies.

In fact, astronaut Harrison Schmitt – who actually stood on the moon, drilled holes, collected moon rocks, and has since returned to Earth – is a well-known sceptic of anthropogenic global warming. In short, Astronaut Harrison knows the moon-landing was real, but does not believe carbon dioxide plays a significant role in causing weather and climate change. In fact, Schmitt has expressed the view – a very similar view to Roberts – that the risks posed by climate change are overrated. Harrison has even suggested that climate change is a tool for people who are trying to increase the size of government – though he does not deny that he has been to the moon and back.

Thirdly, Cox has qualifications in particle physics, yet he incorrectly stated that Albert Einstein devised the four-dimensional-space-time continuum. Those with a particular interest in the history of relativity theory know that while Einstein reproduced the Lorenz equations using a different philosophical interpretation, he was not the first to put these equations into the context of the 4-dimensional continuum – that was done by Hermann Minkowski. Minkowski reformulated in four dimensions the then-recent theory of special relativity concluding that time and space should be treated equally. This subsequently gave rise to the concept of events taking place in a unified four-dimensional space-time continuum.

Then again, Cox may not care too much for facts. He is not only a celebrity scientist, but also a rock star. Just the other day I was watching a YouTube video of him playing keyboard as the lead-singer of the band screamed, “We don’t need a reason”.

There was once a clear distinction between science – that was about reason and evidence – and art that could venture into the make-believe including through the re-interpretation of facts. This line is increasingly blurred in climate science where data is now routinely remodeled to make it more consistent with global warming theory.