Has anyone looked at the recent National Aeronautics and Space Administration Goddard Institute for Space Studies (NASA GISS) Surface Temperature Analysis? A chart of it was used in a recent Australian Broadcasting Company debate on global warming to make the case that surface temperatures have risen continuously during the past 20 years. 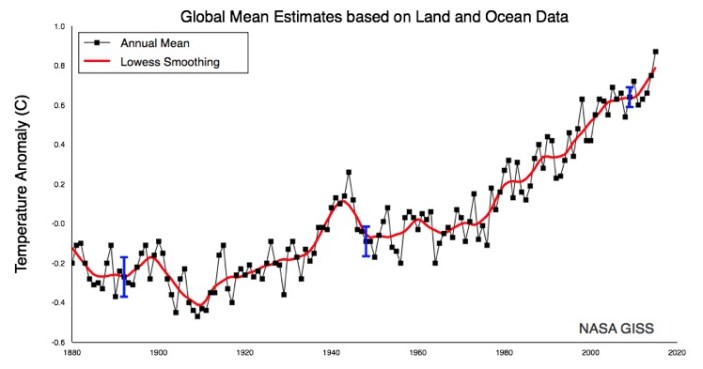 There’s a pretty blatant problem with the NASA chart, however. And it’s a fault that anyone with even a cursory knowledge of climate studies would recognize.

The NASA GISS analysis essentially eliminates the 1998 El Niño. Instead of the ’98 El Niño towering above neighboring years, thanks to its massive release of stored Pacific Ocean heat content, 1998 is simply depicted as one rung on an ever-climbing temperature ladder. And then, suddenly, there’s 2016, with an El Niño that explodes far above all of the preceding years.

If one hasn’t studied any recent climate data, then the chart looks plausible. After all, it was produced by NASA…

But the NASA GISS analysis contradicts every other recent measure of global temperatures. Specifically, the 1998 El Niño produced a major spike in temperature readings and one that the 2016 El Niño has been hard-pressed to beat. (An intervening El Niño in 2010 was far smaller by comparison.) But net global temperatures essentially flatlined in the intervening period of 1998-2016. 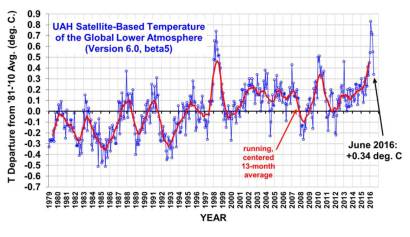 None of this is discernible in the NASA GISS analysis, however. And so, it’s disturbing that NASA is promoting such a graph—and that climate alarmists are using it without either knowing or caring that it is based on a very distorted representation of temperature data.