Everyone knows that climate change is normal occurs naturally, at times rapidly, and that there is really nothing we can do about it. Amazingly, with some climate aspects, there has not been any change in about 40 years.

According to NSIDC sea ice trend data, from 1979 to 2006, the sea ice losses for the Arctic (purple trend line in graph below) were effectively counterbalanced by the sea ice gains in the Antarctic (green trend line), producing a conspicuously flat trend line in global sea ice. 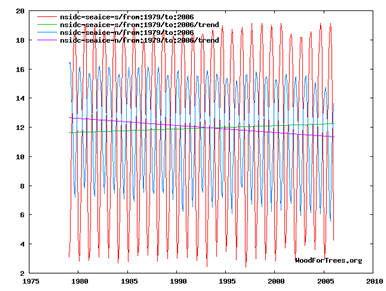 Global sea ice has remained unchanged over the past 38 years, as measured by satellite. Source: woodfortrees.com here.

From 2006 to 2016, global sea ice trends have also been remarkably stable despite a massive increase in anthropogenic CO2 emissions during this period. In fact, the sea ice gains in Antarctica have perhaps modestly superseded the losses in the Arctic, resulting in a very slight increasing overall trend in global-scale sea ice during the last 10 years: 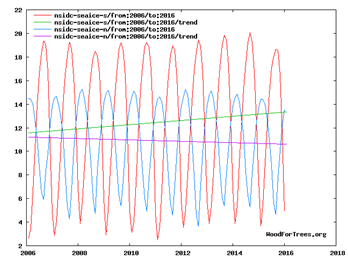 For both hemispheres combined, then, the addition of about 65 ppm of atmospheric CO2 concentration since 1979 has apparently had no overall effect on global-scale sea ice trends.