Tony Heller of RealClimateScience.com: 'A Very Sad Day For Science' -'Dr. Bill Gray has passed away. He was my hero, and an inspiration. Bill was a man of the highest integrity and character. Bill had his funding cut off by Al Gore in 1993 for refusing to go along with Gore’s global warming politics. Unlike so many others, Bill chose scientific integrity over politics and money, and fought against climate fraud to his last breath.' Pioneering hurricane forecaster William Gray dies at 86 – William Mason Gray (Bill), emeritus professor of atmospheric science at Colorado State University, passed away peacefully surrounded by his family on April 16 at the age of 86.

He had remained active in his hurricane and climate change research up until the time of his death. Gray was famous for his seasonal Atlantic Basin hurricane forecasts and his strong disagreement with the scientific basis of the anthropogenic global warming hypothesis.

Gray was a faculty member in the Department of Atmospheric Science at CSU from 1961 through his formal retirement in 2005. After retirement, he continued his hurricane and climate research as a professor emeritus.

In 1984, Gray initiated seasonal hurricane forecasts, for which he became well known, and which received extensive media coverage particularly in the 1980s and 90s. Gray graduated 70 masters and Ph.D. students, and many of his former graduate students have become prominent leaders in the field of tropical meteorology today.

Gray had strong disagreement with the science behind the human‐induced global warming hypothesis and devoted the major portion of his recent years to research in this area.

Gray is survived by his two daughters, Sarah (of San Diego) and Janet (of Fort Collins) and his son Robert and two grandsons Mason and Liam (of San Diego). 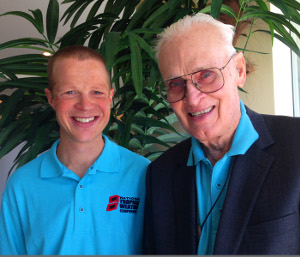 How to describe 16 years spent with one of the greatest minds in hurricane research of the past 60 years? I’m still having trouble coming to grips with the fact that he’s gone.

There are so many things about our relationship that I’m going to miss. The daily hour-long phone calls, the tag-team conference presentations, the forecast day donuts, the chats about topics ranging from hurricanes, to climate change, to politics, to baseball, to the Civil War. I first was introduced to the Colorado State University seasonal hurricane forecasts and Dr. Gray when I did an undergraduate project on his research for my climatology class. I ended up doing my undergraduate Honors thesis on his research, and I was beyond excited when he called me to offer me a graduate research assistantship at CSU.

One of my first interactions with him was the AMS Hurricanes and Tropical Meteorology Conference in 2000 in Fort Lauderdale. After a brief introduction, his first question was “Who had the most RBIs in a single season, which team did he play for, and how many RBIs did he get in the season”? I knew that the answer was Hack Wilson for the 1930 Pittsburgh Pirates with 191 RBIs. At that point, Dr. Gray said he knew I would make a good project member.

While we both loved meteorology, we also had a mutual love for baseball. He grew up a Washington Senators fan while I grew up a Red Sox fan, so we were united by our mutual dislike of the New York Yankees. I was always appreciative of Dr. Gray for giving me opportunities to present at hurricane conferences when I was still quite young. He allowed me to share presentations with him at the National Hurricane Conference and the Florida Governor’s Hurricane Conference when I had just finished my Masters degree.

He also encouraged me to pursue my dream of hiking the Appalachian Trail and generously promised that he would keep a position open for me when I returned. He has always been dismissive about the amazing accomplishments that he has produced in an extraordinarily distinguished research career that spanned 60 years. The humility that he has demonstrated throughout his career is something that we would all do well to emulate. Dr. Gray had an incredible knowledge of the way that the climate works. His development of his genesis parameters – six key ingredients necessary for tropical cyclogenesis – was a groundbreaking piece of research when it was first published in the late 1960s. He also spent many years with his graduate students studying and publishing papers in a variety of fields from tropical cyclone structure to tropical radiation. He is best known worldwide for his seasonal hurricane predictions.

He instituted these predictions when he discovered that El Nino impacted Caribbean and tropical Atlantic vertical wind shear. This was the first time that any group had issued seasonal forecasts for the Atlantic. Now, nearly two-dozen groups have followed his lead issuing these predictions. He has consistently issued these forecasts for over 30 years – a track record unparalleled for university predictions. What distinguishes these forecasts from many others is the extensive write-up that is included.

These forecasts typically reach 30-40 pages and discuss the primary factors why hurricane activity is being forecast at levels that it is. He instilled his enthusiasm for weather/climate studies in his classes as well as through his interactions with graduate students. We spent many afternoons with maps of various climate patterns spread out across a table in his office. He also had the biggest affinity of anyone that I know for massive tables of data. I’ve never seen anyone get so excited for long tables of hurricane statistics or radiation budgets.

Dr. Gray’s memory was extraordinary. I’m amazed at how he remembered all of his project member’s birthdays and could recount baseball statistics or Civil War generals at a particular battle at the drop of a hat. He also could rattle off winners of various AMS awards or characters in movies that he hadn’t seen in 50 years. Another love that Dr. Gray and I shared was for donuts. It was always tradition when the seasonal forecasts were released, the project would stuff envelopes with the forecast. Dr. Gray would always bring in several dozen donuts to fuel the endeavor. When I defended my Ph.D. in the late afternoon, he told me that I still needed to be sure to provide donuts.

Dr. Gray’s generosity with his resources was incredible. He contributed a considerable amount of his own resources to keep our project alive when research grants went dry a few years ago. He also let me stay at his house when I came back for in-person visits after relocating to California. I fondly remember sitting on the couch with him watching the Rockies game while eating Panda Express. My wife Kris and I also enjoyed several vacations at his cabin in the mountains west of Fort Collins.

Even at the end, Dr. Gray was focused on his research. He gave me very clear instructions on various projects I should be conducting over the next few years. He was still sketching clouds using his legal pad and #2 pencils and discussing the intricacies of cumulus convection when I came to see him a few days before his death.

Dr. Phil Klotzbach is currently lead author on the seasonal forecasts. He has worked with Dr. Gray on these forecasts since he joined the Department of Atmospheric Science at Colorado State University in 2000. During this time, he has also authored over two dozen peer-reviewed journal articles on various aspects of hurricanes as well as climate change. Klotzbach received his Ph.D. from CSU in 2007. Klotzbach’s bio and vitae are available.

Dr. Bill Gray Responds To Pope Francis – ‘Unwise and Should Not Be Acted Upon’

Hurricane expert Dr. Bill Gray & team of scientists tell Congress: ‘Global warming that has not actually occurred can scarcely have contributed much to vast devastation wrought by Sandy’ – Bill Gray, Dr. Fred Singer, Dr. Willie Soon & Lord Monckton: ‘After almost 16 years without global warming, there are still a few who implausibly try to blame this non-existent global warming for causing various weather-related disasters in the past two or three years’
Hurricane Expert Dr. Bill Gray: On The Hijacking of the American Meteorological Society (AMS)– ‘I am very disappointed at the downward path AMS has been following for the last 10-15 years in its advocacy of Anthropogenic Global Warming (AGW) hypothesis. AMS has officially taken a position many of us AMS members do not agree with’