Bad news for jetsetters: Global warming to cause costlier flights to US, scientist warns 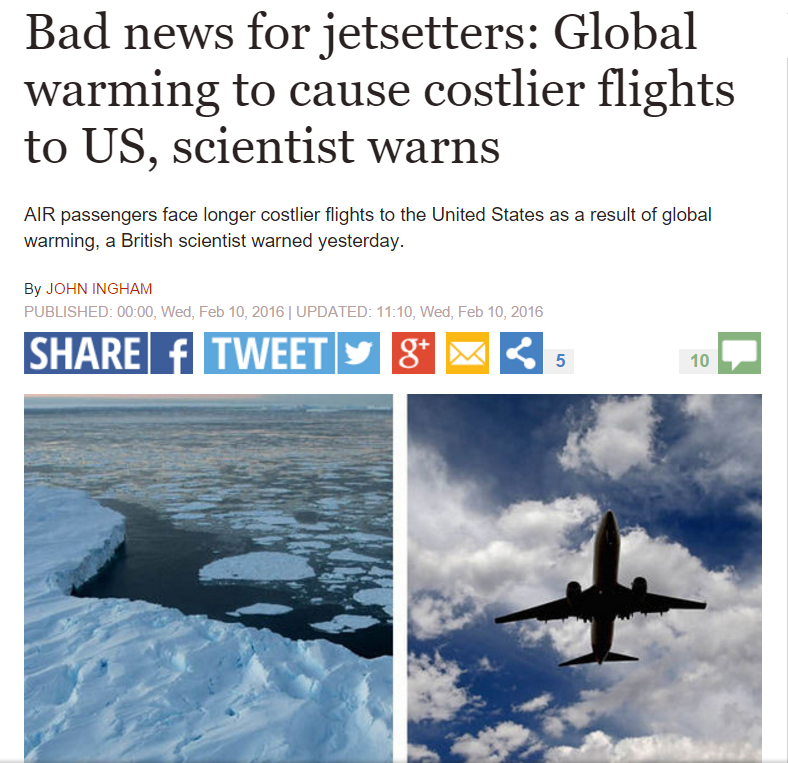 AIR passengers face longer costlier flights to the United States as a result of global warming, a British scientist warned yesterday. Climate change is expected to accelerate the high altitude jet stream which blows from west to east, said Reading University atmospheric scientist Paul Williams. This will speed up eastbound flights but slow down westbound flights by much more, he claimed. And flying is expected to become costlier worldwide because the jet stream encircles the globe.

Writing in the journal Environmental Research Letters, Dr Williams said the jet stream will become 15 per cent faster in winter, increasing from an average of 48mph to 55 mph, with similar increases in the other seasons.

This will result in transatlantic planes spending an extra 2,000 hours in the air every year, adding about £15million a year to airline fuel costs and increasing the risk of delays.

Dr Williams said: “The aviation industry is facing pressure to reduce its environmental impacts, but this study shows a new way in which aviation is itself susceptible to the effects of climate change.

“The net result is that roundtrip journeys will significantly lengthen.

“This effect will increase the fuel costs to airlines, potentially raising ticket prices, and it will worsen the environmental impacts of aviation.”

He predicts that the jet stream will speed up if carbon dioxide levels double in the next few decades due to a failure to cut emissions quickly.

This means that the current record for a New York to London flight of 5h 16m – set in a strong jet stream last year by a British Airways 777 – will be broken regularly.