Meteorologist: 2010s officially the snowiest decade in the east coast in the NOAA record – surpassing the 1960s

Meanwhile, As the snow piles up, climate change activists are already blaming the blizzard on 'global warming':

The monster blizzard of 2015 will be adding to what is already the snowiest decade on the East Coast.

“Assuming this storm gets ranked by NOAA as one of the high impact (population affected by snowstorm) snowstorms (likely since the November storm was), we will have had 14 major impact storms this decade (only half over) beating out the 10 in the 1960s and 2000s,” Joseph D’Aleo, CCM (Certified Consulting Meteorologist), told Climate Depot on Monday.

“Watch for widespread sub-zero cold next week if the European models are right (all the way to North Carolina and including DC area),” D’Aleo, the co-chief Meteorologist with Weatherbell Analytics, added. The increase in snowfalls is counter to what the UN IPCC predicted. See: In 2001, the IPCC predicted milder winters and less snow. Experts are hoping no one remembers – UN IPCC 2001: ‘Milder winter temperatures will decrease heavy snowstorms’ 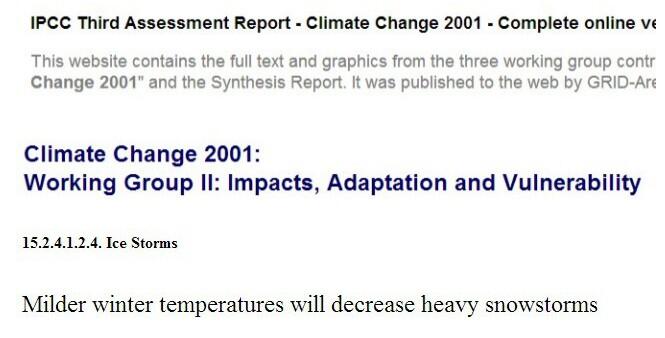 & NYT in 2000 quoted ‘Oppenheimer on the pathetic spectacle of the unused sled in his stairwell, symbol of a warming world:

Also in 2000, scientists in the UK boldly predicted the end of snow due to ‘global warming.’ See: Flashback 2000: ‘Snowfalls are now just a thing of the past’: According to Dr David Viner, a senior research scientist at the climatic research unit (CRU) of the University of East Anglia,within a few years winter snowfall will become ‘a very rare and exciting event. Children just aren’t going to know what snow is.’

The blizzard bearing down on the U.S. this week is now being blamed on global warming. See: 2015 U.S. Blizzard blamed on ‘global warming’ – Warmist Bill McKibben: Blizzards are ‘Climate change at work’ – NY Gov.: ‘Part of the changing climate’

Below is a round-up of scientists debunking the notion that blizzards are caused by man-made ‘global warming.’

2013: Climate Astrology: Blizzard blamed on global warming?! Is there any weather event that is inconsistent with global warming? — Climate Depot Round up – ‘No matter what the weather is like, it always turns out to be exactly the kind of weather we should expect if human activity were causing global temps to rise’

2013: Round Up: Meteorologists Slaps Down latest warmist claim of ‘Less snow = more blizzards’ — AP’s Seth Borenstein rebutted – Meteorologist Dr. Ryan Maue mocks: ‘Hint, if your theory or hypothesis involves contradictions, may be time to admit your original knowledge of subject was inadequate’

Scientists balk at ‘hottest year’ claims: Ignores Satellites showing 18 Year ‘Pause’ – ‘We are arguing over the significance of hundredths of a degree’ – The ‘Pause’ continues

Watch: Morano on Fox on ‘Hottest Year’ Claims: ‘It’s statistical nonsense’ – ‘NASA’s Gavin Schmidt has egg all over his face with this’