2006: 'Henry Paulson may find the tightrope he'll be walking as President Bush's Treasury secretary will span a wider gulf than in his current twin jobs as chairman of Goldman Sachs and The Nature Conservancy. Both the Wall Street powerhouse and the world's richest environmental group look at global warming as a dire threat requiring government-mandated reductions in carbon dioxide and other gases that trap heat in the atmosphere like a greenhouse.'

"Environment is my passion," Paulson told Charlie Rose in a PBS interview in 2004...

Environmentalists normally critical of Bush believe they may have an advocate with access to the president's ear. "It isn't every day that the Sierra Club finds itself welcoming a nomination to George W. Bush's Cabinet while ultraconservatives decry the move," said Carl Pope, the Sierra Club's executive director. "But on issues like global warming, Hank Paulson appears to favor managing risk rather than cooking the books," Pope said. "It is heartening that someone of Mr. Paulson's stature in the financial world is willing to say that immediate action must be taken to combat global warming." Last year under Paulson's direction, Goldman Sachs issued an eight-page position paper on environmental policy, sansus, led by United Nations climate experts, that global warming poses one of the greatest threats this century. Like Bush, the Goldman Sachs statement endorsed a market for businesses to buy and sell rights to emit greenhoying it accepts a scientific conseuse gases, saying it will spur technology advances by companies "that lead to a less carbon-intensive economy." But, it added, "Voluntary action alone cannot solve the climate change problem," a position contrary to the Bush administration's view.

Watch Now: Morano on Fox slams ‘atrocious’ climate report by Tom Steyer, Paulson & Bloomberg. Morano on ‘risky business’ report: ‘What they have done is a bunch of fortune telling with models’ 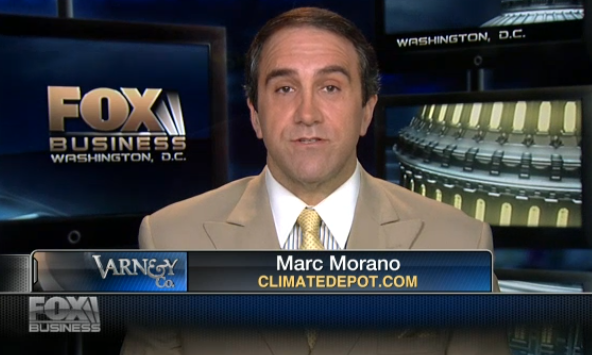 Watch here:
Morano on Fox Business with Stuart Varney: ‘They are implying – this is where it gets so far off the charts of science – they are implying that a carbon tax will somehow alter global temperature and future storms. That we can — through a carbon tax –impact the climate. This makes absolutely no sense — because carbon taxes, EPA regulations and cap-and-trade — not only would they not impact global temperatures, they would not even impact global CO2 levels in any way even if you buy their science.
It’s pure symbolism. There is no method by which you could gauge whether they would have an impact on climate.’

Report from fmr. NYC Mayor Bloomberg, fmr. Sec. of Treasury Paulson & Tom Steyer: U.S. to face multibillion-dollar bill from climate change – Called “Risky Business,” the report projects climate impacts at scales as small as individual counties. Its conclusions about crop losses and other consequences are based not on computer projections, which climate-change skeptics routinely attack, but on data from past heat waves. It paints a grim picture of economic loss.

Fmr. GOP Treas. Sec. HANK PAULSON: ‘AS WRONG ABOUT CLIMATE AS HE WAS ABOUT THE CRASH’ – ‘Like the Captain of the Titanic returning from his watery grave to tell us’: ‘Trust me. I have experience of managing disasters’

Bailout climate with a carbon tax? Bush’s Bank Bailout Treas. Sec. Hank Paulson in NYT: ‘The coming climate crash…Let’s not ignore the climate bubble’ – Implies tax will make weather less extreme!
When simply walking outside can kill: Study reveals rising summer heat and humidity will make any outdoor activity across America DEADLY for tomorrow’s retirees
Haha! UN IPCC’s Michael Oppenheimer claims warming will become so bad ‘It will be functionally impossible to be outside’