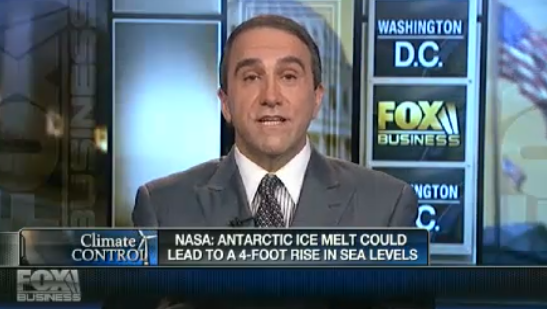 Marc Morano: ‘This is very likely of natural origin. You have Gov. Jerry Brown worried about LAX being relocated because of this allegedly unstoppable melting.

This is models. When current reality fails to alarm, they make a bunch of scary predictions. We are talking about 1000 year time scales and beyond for this melting.’

‘Irreversible Collapse Of Climate Alarmism’ – Antarctica & Sea Level claims – ‘Yet another non-crisis crisis’ – ‘Truth sacrificed in the name of sensationalism’ – ‘What is not clearly stated is that all glaciers, including the WAIS and those on Greenland, are constantly flowing down hill. The reason they flow is that they are constantly gaining mass from accumulated snowfall. Glaciers grow from the top and the added mass causes the ice to flow down hill… The fact of the matter is that the ice drainage rate—ice melting or breaking off into the ocean—is highly variable, as is the accumulation of new ice from precipitation. The time scales for variation can be long, longer than a human lifetime, so any snapshot at a particular instant must be taken with a grain of salt (or crystal of ice). Despite the caterwauling in the media, this is yet another non-crisis crisis. In fact, even while this new speedup in the WAIS’s march to the sea has been found, Antarctica is setting new records for surrounding sea ice for a second straight year, baffling scientists seeking to understand why this ice is expanding rather than shrinking in a supposedly warming world. How soon we forget the plight of those high-minded eco activists who got themselves stuck in the summer ice around the southernmost continent. If they are in a coastal area they can flow into the sea where chunks break off forming icebergs. If the ice was on land, its addition to the ocean will cause sea level to rise.’ ‘There is a whiff of desperation in the air, and the over-hyping of these latest papers signals not the imminent decline of Antarctica’s glaciers but the irreversible collapse of climate alarmism. This latest climate change scare is a prime example of science speak sending the overly excitable media into an ignorance driven frenzy.’

‘Today’s scare of the day is that Antarctica is going to collapse and drown us all – in about 1,000 years. Scientists told exactly the same story in 1922′

Oops. JERRY BROWN WARNS LAX WILL HAVE TO BE MOVED DUE TO GLOBAL WARMING; UPDATE: AIDE CORRECTS – Gov. Jerry Brown ‘warned that California my be underwater in the future–not because of his budget, but because glaciers in Antarctica will collapse and sea levels will rise four feet over the next 200 years.’ Brown cautioned, “If that happens, the Los Angeles airport’s going to be underwater. So is the San Francisco airport.” As for the San Onofre nuclear power plant: “You’re going to have to move all that … That’s billions, if not tens of billions. Luckily, we can take a few years.”

Update: ‘The governor misspoke about LAX,” said Evan Westrup, a spokesman for the Brown administration. Environmental officials for Los Angeles World Airports, the operator of LAX, said the airport has an elevation of more than 120 feet. “A 4-foot rise in sea level,” they said, “should have minimal impact on airport operations.”

What about Jerry Brown’s claim of San Francisco airport being underwater? ‘What about SFO, which is only 10 feet or so above the Bay? At current rates of sea level rise, SFO will be underwater in only infinity years.’

Flashback 1929: ‘Primitive Peoples’ Have Always Had Flood Myths: ‘The Antarctica is melting and is going to drown us all story has been a useful tool for generating research money – for as long as scientists have known about Antarctica.’

The World’s News (Sydney) – July 3, 1929: ‘World Flood’: ‘One of the purposes of the Byrd Expedition is to determine whether the Antarctic ice-cap is melting.  According to Sir Edgeworth David, famous Australian geologist, the level of the entire ocean would be raised about fifty feet if the whole Antarctic ice barrier melted. Practically every seaport town would then be under water.’

Flashback 2009:  ;It happened many times before when the Earth was as warm as it is about to be. In terms of time scales, I do not think the results of this study are relevant to what will be happening in the next 100 years and beyond. The problem is far more complex.’

NYT in 2014: ‘Sometime between 200 and 900 years from now the rate of ice loss from this glacier could reach a volume sufficient to raise sea levels about 4 inches (100 millimeters) a century. At that point, according to the paper, ice loss could pick up steam, with big losses over a period of decades.* But in a phone conversation, Joughin said the modeling was not reliable enough to say how much, how soon. “Collapse is a good scientific word,” he told me, “but maybe it’s kind of a bad word” in the context of news. There’s more on this work ina well-written news release from Joughin’s university. We are talking about a retreat that is unstoppable because we think we have enough evidence to say that these glaciers will keep retreating for decades and even centuries to come…. We’re talking about a slow degradation of ice in this part of Antarctica. Disturbingly, you can backtrack to 2009 and see a similar burst of “collapse” news around the release of two Nature papers, even though the science then also spoke of sea-level changes over millenniums. Click back to “Study: West Antarctic Melt a Slow Affair” for a bit of déjà vu.

2013: New paper finds the majority of East Antarctic glaciers have advanced in size since 1990 – A new paper published in Nature finds that a majority of the outlet glaciers along the East Antarctic ice sheet have advanced in size over the past 20 years from 1990 to 2010. According to the paper, “Despite large fluctuations between glaciers—linked to their size—three [significant] patterns emerged: 63 per cent of glaciers retreated from 1974 to 1990, 72 per cent advanced from 1990 to 2000, and 58 per cent advanced from 2000 to 2010.” According to the authors, “In the 1970s and 80s, temperatures were rising and most glaciers retreated. During the 1990s, temperatures decreased and most glaciers advanced. And the 2000s saw temperatures increase and then decrease, leading to a more even mix of retreat and advance.” “When it was warm and the sea-ice decreased, most glaciers retreated, but when it was cooler and the sea ice increased, the glaciers advanced.” [Note: Antarctic sea ice is currently near record-high levels]

Antarctic Sea Ice At Record Levels: ‘The National Snow and Ice Data Centre said the rapid expansion had continued into May and the seasonal cover was now bigger than the record ‘by a significant margin’

Flashback 2009: Study finds West Antarctic Ice Sheet May Not Be Losing Ice As Fast As Once Thought

Scientists: ‘Why the Greenland and Antarctic Ice Sheets are Not Collapsing’

Study finds: West Antarctic Ice Sheet May Not Be Losing Ice As Fast As Once Thought – October 19, 2009 – University of Texas at Austin Press Release