1910: Father of global warming Prof. Svante Arrhenius believed that doubling CO2 would be a good thing

North Otago Times - April 16, 1910: 'As has been called to our attention by Prof. Arrhenius, the consumption of coal at present is returning to the stmosphere the carbon dioxide of which it was robbed when the deposits  of carbon were stored away in the coal beds during the carboniferious period...a doubling of the quantity in the atmosphere would more than double the rate of growth of plant.' 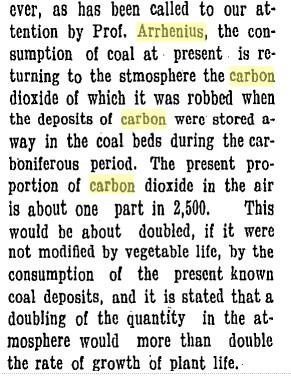