Prof. Roger Pielke Jr.: ‘The data shows clearly that the observations are running cooler than the out-of-sample predictions of the IPCC from each of its past 4 reports’

1. The observations of global average surface warming are about half that predicted in the first IPCC report from 1990. Over the past 25 years, projections of rates of future surface temperature increase have clearly come down dramatically.

2. Subsequent IPCC reports reduced their projections, but global average temperature observations are still running lower than that projected in 1995, 2001 and 2007. 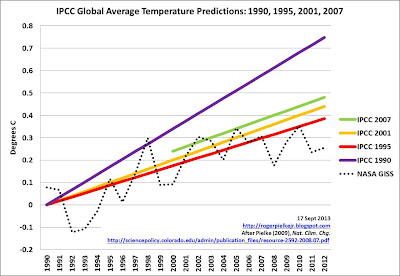 Are the lower observed temperatures significantly different than the projections?

Fortunately, there is a just-published peer-reviewed paper in Nature Climate Change which takes up this question, and concludes:

'Recent observed global warming is significantly less than that simulated by climate models.'

Pielke Jr.: 'How did the climate  community allow intolerant activists, asserting certainties to become the public face of the field?'