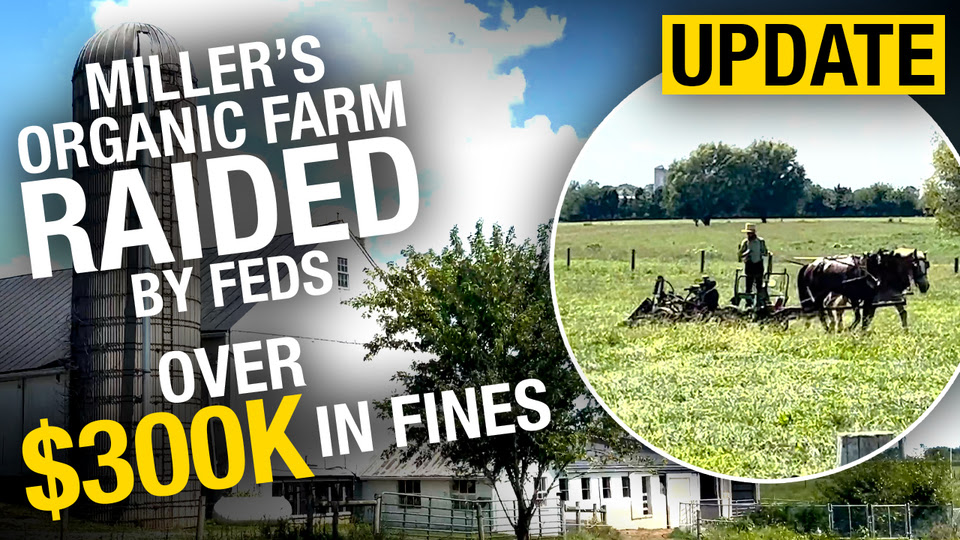 Despite being raided by armed U.S. Marshals and facing hundreds of thousands of dollars in fines, Amos Miller explained that farmers need to stand strong.

Miller’s Organic Farm is located in the remote Amish village of Bird-in-Hand, Pennsylvania. The farm supplies everything from grass-fed beef and cheese, to raw milk and organic eggs, to dairy from grass-fed water buffalo and all types of produce, all to roughly 4,000 private food club members who pay top dollar for high quality whole food.

The private food club members appreciate their freedom to get food from an independent farmer that isn’t processing his meat and dairy at U.S. Department of Agriculture facilities, which mandates that food be prepared in ways that Miller’s Organic Farm believe make it less nutritious.

Amos Miller, the farm’s owner, contends that he’s preparing food the way God intended — but the U.S. government doesn’t see things that way. They recently sent armed federal agents to the farm and demanded he cease operations. The government is also looking to issue more than $300,000 in fines — a request so steep, it would put the farm out of business.

On last night’s episode of the Ezra Levant Show, Rebel News USA reporter Jeremy Loffredo (@LoffredoJeremy) joined guest host Sheila Gunn Reid to provide an update on Amos Miller’s fight with the government for the right to sell his produce to whomever he wishes.

There’s this farmer named Amos Miller and he’s been farming for 25 years. No electricity, no fertilizer, no gasoline. He has really, really impressive crop yields using only the only the oldest of methods, totally organic. He has milk, he has beef, he has different types of sheep. He has chicken, all types of vegetables. And he has a private buyers club of about 4,000 people all across the country that pay him top dollar for his food.

And the government doesn’t like this idea of a private buyers club. They have raided his farm with armed federal agents and they have said he needs to stop selling his meat until he gets regulated by the federal agencies whose job it is to, you know, regulate food. And he says, “you know, the way you guys regulate it, it kind of hurts the nutrition of the food — you know, you wash it in these things, you’ve given these vaccines and the cows get all types of medicine, I don’t do any of that. So I think going through your regulatory process will actually hurt the quality of my food and that’s what I’m being paid top dollar for, it is this high quality food.”

So they are fining him hundreds of thousands of dollars, and they’ve actually sent armed federal agents there to take inventory of his meat, of his dairy, and they visit him to make sure that he’s not selling anything and that he’s not ramping up his production in any way. So that’s where he is now. He’s figuring out how to fight the federal government, what he’s going to do. And you know, he’s been put in this really tight spot along with the people who, you know, look to him for this food. They’re not getting their meat and dairy right now because of the government.

If you would like to support Amos Miller in his fight with the U.S. government, sign our petition at LeaveThemAlone.com.