This climate video checks off just about every identity politics box: It's got climate change, animal activism, a drag performer, LGBTQ 'Pride' and, yes, even "sustainability" (the bird costume was made using black walnuts and marigolds). 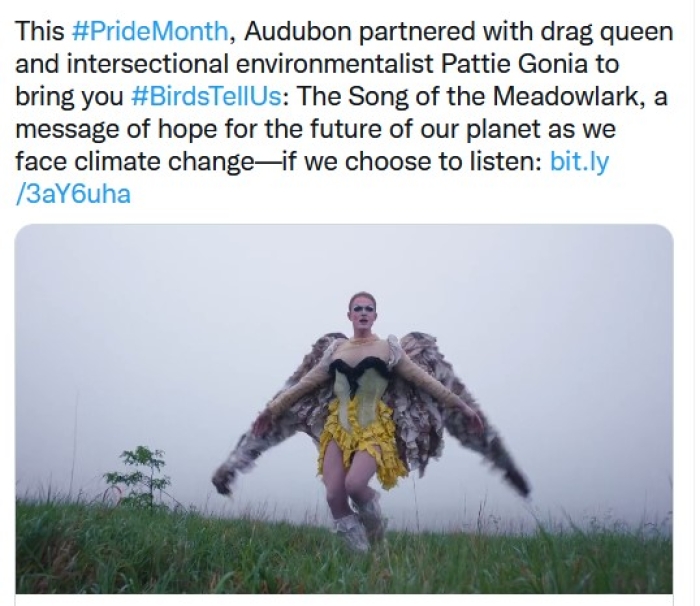 The Audubon Society has released a music video, featuring an intersectional drag queen, explaining how birds’ battle against climate change provides humans with a “message of hope.”

The video, “Birds Tell Us: The Song of the Meadowlark,” featuring a drag queen dressed as a meadowlark bird-person, both honors LGBTQ “Pride Month” and addresses the issue of climate change, Audubon’s tweet of the video says:

“This #PrideMonth, Audubon partnered with drag queen and intersectional environmentalist Pattie Gonia to bring you #BirdsTellUs: The Song of the Meadowlark, a message of hope for the future of our planet as we face climate change—if we choose to listen: https://bit.ly/3aY6uha”

“I’m genuinely so inspired by birds and together we could reach new audiences and queering the environmental space,” intersectional drag queen Pattie Gonia says, explaining why she wanted to star in in the bird-advocacy group’s video.

While birds sing about climate change, they have also lost some of their songs because of it, Audubon explains on a web page dedicated to the music video:

“For years, Audubon has reminded the world that by observing how climate change impacts birds, we can more clearly see how it has—and will—impact us. Birds tell us every day that the world is changing both through their songs and the songs they no longer sing due to habitat loss and global temperature rise.”

What’s more, the meadowlark bird-person’s costume showcases “sustainability,” because it was made using black walnuts and marigolds, and also sourced from Nebraska raw materials:

“When Pattie and Audubon began collaborating on the music video, Pattie knew that she wanted to showcase the creativity and passion of artists living in Nebraska while also focusing on sustainability.

“Local textile artists and fashion designers Lesley Darling and Joelle Tangen fit the bill perfectly, and together they created a Western Meadowlark dress almost entirely sourced from Nebraska raw materials, including the black walnuts and marigolds used to dye silk black and yellow. Every bit of fabric was either used in the dress or repurposed into other objects, like scarves and handkerchiefs.”