Wash. Post laments U.S. ‘struggling to squeeze opportunity out of an energy crisis’ – $5 gas is NOT ‘spurring a green revolution’ 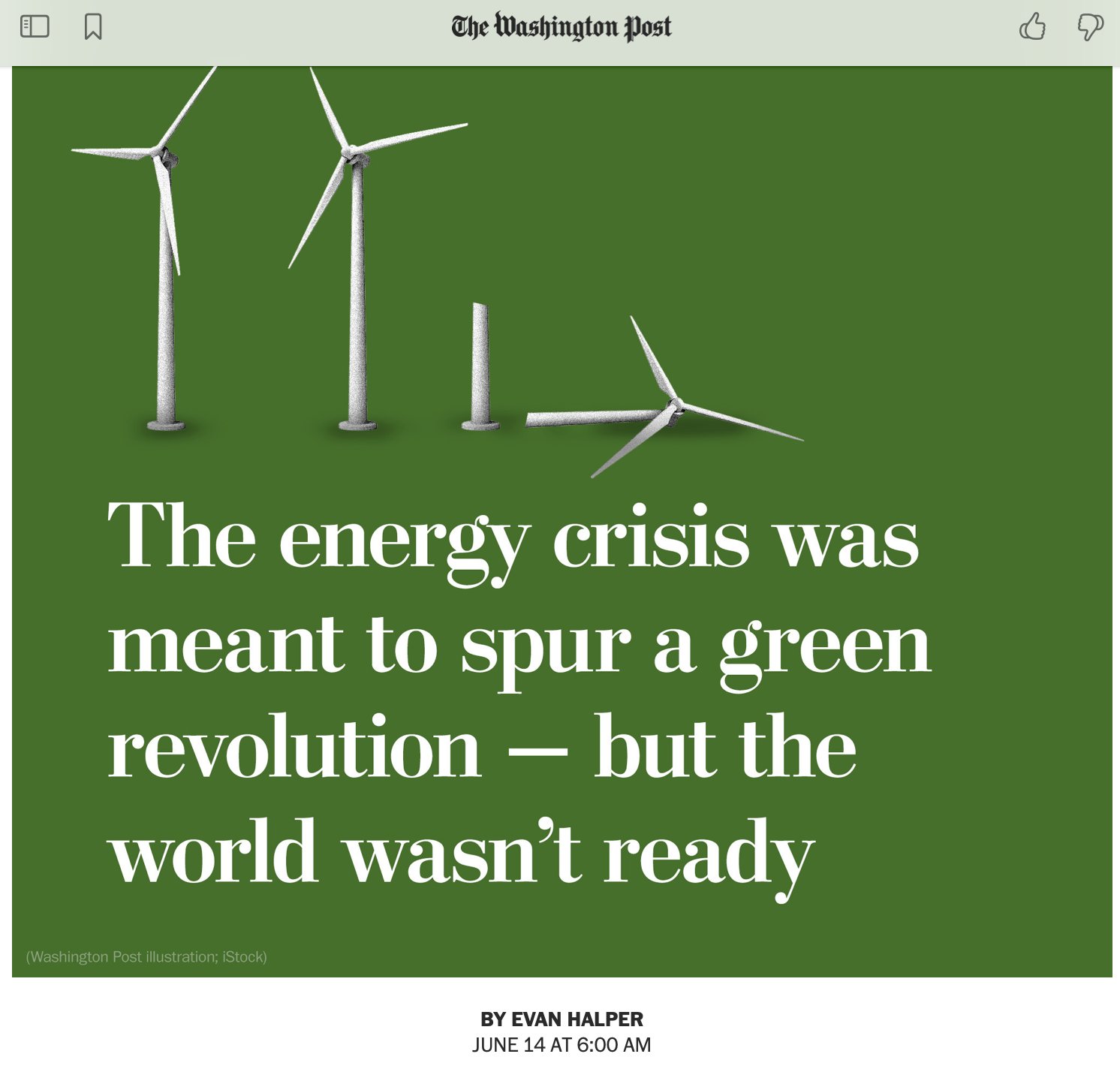 WaPo: "The United States is struggling to squeeze opportunity out of an energy crisis that should have been a catalyst for cleaner, domestically produced power. After decades of putting the climate on the back burner, the country is finding itself unprepared to seize the moment and at risk of emerging from the crisis even more reliant on fossil fuels." ...  “The energy crisis exacerbated by the war in Ukraine has seen a perilous doubling down on fossil fuels by the major economies,” U.N. Secretary-General António Guterres said. ...

U.S. climate envoy John F. Kerry: “You have this new revisionism suggesting that we have to be pumping oil like crazy, and we have to be moving into long-term [fossil fuel] infrastructure building,” he said at the Time100 Summit in New York this month. “We have to push back.”

The US is struggling to squeeze opportunity out of an energy crisis that should be a catalyst for domestic green power and electric cars. Leading climate activists are alarmed. New. https://t.co/moX4iDlMzF

The United States is struggling to squeeze opportunity out of an energy crisis that should have been a catalyst for cleaner, domestically produced power. After decades of putting the climate on the back burner, the country is finding itself unprepared to seize the moment and at risk of emerging from the crisis even more reliant on fossil fuels.

The problem is not entirely unique to the United States. Across the globe, climate leaders are warning that energy shortages prompted by Russia’s unprovoked invasion of Ukraine and high gas prices driven by inflation threaten to make the energy transition an afterthought — potentially thwarting efforts to keep global temperature rise under 1.5 degrees Celsius.
“The energy crisis exacerbated by the war in Ukraine has seen a perilous doubling down on fossil fuels by the major economies,” U.N. Secretary General António Guterres said at a conference in Vienna on Tuesday, according to prepared remarks. He warned governments and investors that a failure to immediately and more aggressively embrace clean energy could be disastrous for the planet.

U.S. climate envoy John F. Kerry suggested that nations are falling prey to a flawed logic that fossil fuels will help them weather this period of instability, which has seen gas prices climb to a record-high national average of $5 per gallon. “You have this new revisionism suggesting that we have to be pumping oil like crazy, and we have to be moving into long-term [fossil fuel] infrastructure building,” he said at the Time100 Summit in New York this month. “We have to push back.”

In the United States — the world’s second-largest emitter of greenhouse gases after China — the hurdles go beyond the supply chain crunch and sanctions linked to the war in Ukraine. The country’s lofty goals for all carbon pollution to be gone from the electricity sector by 2035 and for half the cars sold to be electric by 2030 are jeopardized by years of neglect of the electrical grid, regulatory hurdles that have set projects back years, and failures by Congress and policymakers to plan ahead.

The challenges are further compounded by plans to build costly new infrastructure for drilling and exporting natural gas that will make it even harder to transition away from the fossil fuel.

“We are running into structural challenges preventing consumers and businesses from going cleaner, even at this time of high oil and gas prices,” said Paul Bledsoe, a climate adviser in the Clinton administration who now works on strategy at the Progressive Policy Institute, a center-left think tank. “It is a little alarming that even now, Congress is barely talking about clean energy.”

Consumers are eager for more wind and solar. Companies looking to go carbon-neutral are facing growing waitlists for access to green energy, and a Pew Research Center poll in late January found that two-thirds of Americans want the United States to prioritize alternative energy over fossil fuel production.

But lawmakers have balked for more than a decade at making most of the fundamental economic and policy changes that experts widely agree are crucial to an orderly and accelerated energy transition. The United States does not have a tax on carbon, nor a national cap-and-trade program that would reorient markets toward lowering emissions. The unraveling in Congress of President Biden’s $1.75 trillion Build Back Better plan has added to the head winds that green-energy developers face.

“There is literally nothing pushing this forward in the U.S. beyond the tax code and some state laws,” said Heather Zichal, a former White House climate adviser who is now the chief executive of the American Clean Power Association.

The effects of the U.S. government’s halting approach are being felt by solar-panel installers, who saw the number of projects in the most recent quarter fall to the lowest level since the pandemic began. There was 24 percent less solar installed in the first quarter of 2022 than in the same quarter of 2021.

The holdup largely stems from a Commerce Department investigation into alleged tariff-dodging by Chinese manufacturers. Faced with the potential for steep retroactive penalties, hundreds of industrial-scale solar projects were frozen in early April. Weak federal policies to encourage investment in solar manufacturing left American companies ill-equipped to fill the void.

“We shut down multiple projects and had to lay off dozens of people,” said George Hershman, chief executive of SOLV Energy, which specializes in large solar installations. SOLV, like dozens of other solar companies, is now scrambling to reassemble those projects after the administration announced a pause of the tariffs.

Meanwhile, adding clean electricity to the power grid has become an increasingly complicated undertaking, given the failure to plan for adequate transmission lines and long delays connecting viable wind and solar projects to the electricity network.

While the United States is hitting some significant benchmarks in the transition to greener electricity, boasting record installations of clean power in the first quarter of this year, the rate of growth has slowed and lags where it needs to be to reach key climate goals. The country is not alone in this predicament.

The record growth in wind and solar last year was outpaced by the world’s rising demand for energy, according to Ember, a European think tank that tracks the energy transition. Clean power could meet only a third of that growth in 2021. The rest was largely met by burning more coal.

“We are seeing progress in the transition, but it is not fast enough,” said Roberto Bocca, head of energy at the World Economic Forum. “And it is not resilient enough to the increased volatility in the current economic and political environment.”

The United States needs to triple its pace of emissions reductions to meet the targets it has set for itself, according to a new study by researchers at the Lawrence Berkeley National Laboratory, the Electric Power Research Institute and other institutions.

There are numerous hurdles in the way, as outdated federal rules and local planning disputes slow projects down. In November, for instance, one of the country’s larger clean-energy projects faltered in the Northeast. Maine voters stymied plans for a transmission line that would bring enough clean electricity from hydroelectric plants fueled by dams in Canada to power 900,000 homes in New England.

The plan was opposed by some local conservation groups that argued the lines would create an environmental menace in Maine’s North Woods and that hydroelectric power is detrimental to fragile aquatic ecosystems. But the most potent opposition came from energy companies heavily invested in fossil fuel, which spent $24 million supporting the ballot initiative campaign to kill the transmission line.

That fight was sobering to Richard Barringer, a champion of the project and former commissioner of conservation and director of state planning who had served three Maine governors.

“The very local opposition did not surprise me,” Barringer said. “What did surprise me was the amount of money that poured in.”

The vote reversed a years-long, multimillion-dollar state approval process during which, Barringer said, environmental concerns were thoroughly considered and mitigated. And voter antipathy toward the project was driven in large part by distrust for the local utility partner on it, Central Maine Power, which has a dismal customer service record and a history of outages.

The project, which supporters are asking the courts to get back on track, was a key building block of the climate action plan for New England’s most populous state, Massachusetts.

Its troubles are indicative of a much bigger nationwide challenge in building transmission lines for all forms of clean energy. The Department of Energy reports that transmission systems need to be expanded by 60 percent by 2030 to meet the administration’s goals. And they may need to triple in capacity by 2050.
Patching wind and solar projects into the grid infrastructure that does exist, meanwhile, is increasingly challenging. Over the last decade, the time it takes to get a project online has jumped from two years to longer than three and a half years, according to the Lawrence Berkeley National Laboratory. Its researchers say grid operators are taking longer to study project viability and are overwhelmed by a dramatic rise in the number of projects in the queue.
The Biden administration is promising to ease congestion and shore up the grid through billions of dollars in spending on transmission lines and other improvements authorized in the infrastructure package that Congress passed. But it will probably be years before the upgrades and expansions are operational.
The operators of PJM Interconnection, a grid that serves 13 states stretching from North Carolina to Illinois, as well as D.C., are so backlogged with proposals for solar and wind farms that they are putting most of them on hold as they overhaul their procedures. The pause on new hookups, said Mary Kate Francis, director of energy sourcing at Edison Energy, a company that helps large companies secure clean power, means that “new projects companies wanted to develop in that area will face a multiyear wait to even be considered.”

Evan Halper is a business reporter for The Washington Post, covering the energy transition. His work focuses on the tensions between energy demands and decarbonizing the economy. He came to The Post from the Los Angeles Times, where he spent two decades, most recently covering domestic policy and presidential politics from its Washington bureau.  Twitter

So the energy crisis was planned? Quite a headline. pic.twitter.com/n0MWgWC0TJ