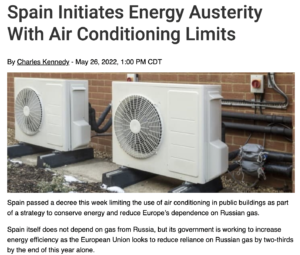 Spain passed a decree this week limiting the use of air conditioning in public buildings as part of a strategy to conserve energy and reduce Europe’s dependence on Russian gas.

Spain itself does not depend on gas from Russia, but its government is working to increase energy efficiency as the European Union looks to reduce reliance on Russian gas by two-thirds by the end of this year alone.

“Energy savings are the quickest and cheapest way to address the current energy crisis, and reduce bills,” the European Commission said last week when it unveiled details of its REPowerEU plan “to rapidly reduce dependence on Russian fossil fuels and fast forward the green transition.”

As part of the goal to reduce consumption and bills, Spain is now limiting the use of air conditioning in public buildings. During the summer—when temperatures often rise to over 40 degrees Celsius (104 F)—air conditioning in public buildings should be set at no lower than 27 degrees Celsius (80.6 F), according to the government’s newly-passed decree on energy efficiency.

In the winter, offices and buildings where public workers work will not be heated above 19 degrees Celsius (66 F).

The limits to the use of air conditioning measures are expected to apply “whenever it is technically possible,” according to the Spanish government’s decree.

Turning down the thermostat and using less air-conditioning is one of the nine measures that the International Energy Agency (IEA) and the European Commission outlined in April, which, they say, would save EU households money, reduce EU reliance on Russian fossil fuels, support Ukraine, and help the fight against climate change. The other measures include driving at lower speeds on highways, working from home, using public transport, and giving preference to trains over short-haul flights.

Turning down the thermostat at home by just 1 degree Celsius would save around 7 percent of the energy used for heating. Setting the air conditioner 1 degree Celsius warmer could reduce the amount of electricity used by almost 10 percent, the IEA and the EC noted.

By Charles Kennedy for Oilprice.com IEA report ‘A 10-Point Plan to Cut Oil Use’ excerpts: “Reducing highway speed limits by about 6 miles per hour; more working from home; street changes to encourage walking and cycling; car-free Sundays in cities and restrictions on other days; cutting transit fares; policies that encourage more carpooling; cutting business air travel; and more.” … “Governments have all the necessary tools at their disposal to put oil demand into decline in the coming years, which would support efforts to both strengthen energy security and achieve vital climate goals.” …

Car-free Sundays in cities: Banning the use of private cars on Sundays

‘Tax’ SUVs: “Sales of SUVs also keep increasing…policies to address the rise in sales of such vehicles – such as specific registration and road taxes – are key.” …Ban installation of new oil boilers

Climate Depot’s Morano: “COVID 2.0 has arrived?! The 2022 International Energy Agency’s (IEA) report sounds an awful lot like an energy version of COVID lockdowns. Instead of opening America back up for domestic energy production, we are told to suffer and do with less and are prescribed the same failed lockdown-style policies we endured for COVID. It is odd how COVID ‘solutions’ also allegedly helped the climate and now the same solutions are being touted to deal with Russia’s invasion of Ukraine.  As a bonus, IEA tells us these measures will also help ‘achieve vital climate goals.’ Let’s simplify this: The proposed ‘solutions’ to climate change, COVID, and now the Russian war are all exactly the same — hammer the poor and middle class with more restrictions on travel, less freedom, and even more surrendering of power to unelected government regulators.

This new 2022 report from IEA comes follows their 2021 report urging a form of climate lockdowns to battle global warming. The 2021 IEA report called for ‘behavioral changes’ to fight climate and ‘a shift away from private car use’ and ‘upper speed limits’ and thermostat controls; limits on hot water & more!.“ Lockdown 2.0: The “Switch Off Putin” RePlanet report: “We propose bans on all business flights, private jets and internal flights within Europe to save oil, and bans also on car use within cities,” the report’s authors said. “This should be combined with free public transport.”

“In some ways, the speed of the change will resemble the Covid lockdowns,” the report noted, adding, “as, with Covid lockdowns, social pressure to abide by national restrictions will also play a big part.”

Morano: “This ‘Switch Off Putin’ report is serving as Putin’s revenge on the West, allowing the once free West to destroy itself under the false guise of hurting — Putin.”