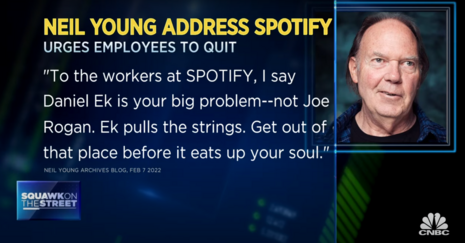 Neil Young sent out the proverbial Bat-Signal and petitioned aging progressives across the U.S. to “ditch the companies” he alleged are “contributing to the mass fossil fuel destruction of Earth.”

Young followed a typical conspiracy path — he attacked banks. He called out Chase, Citigroup Inc., Bank of America Corp. and Wells Fargo & Co as particularly egregious contributors to the climate crisis on his website. Young argued that “baby boomers,” who have “70 percent of the country’s financial assets” in their hands “compared with just about 5 percent for millennials,” have a responsibility. He suggested they “lead” the fight against American banks. To do so, he argued that Americans should “ditch” big banks “[f]or their continued funding of the fossil fuel damage even as the global temperature keeps climbing.”

Young went even further, asking baby boomers to “[j]oin me as I move my money away from the damage causers or you will unintentionally be one of them.”

There is one problem with Young’s call to boycott major banks, though: Chase, Citigroup, Bank of America, and Wells Fargo have already subscribed to an extremist environmental agenda with sums of money that the Forbes World’s Billionaires List might even blush at.

Indeed, all four major American banks have made lofty promises to address so-called sustainability goals in the coming years.

JP Morgan Chase & Co. agreed to give “more than $2.5 trillion over the next 10 years to address climate change and contribute to sustainable development, including $1 trillion for green initiatives.”

Meanwhile, Bank of America claimed to be on the path to “achieve net zero greenhouse gas (GHG) emissions in our financing activities, operations and supply chain before 2050.”

Citigroup likewise committed to “finance and facilitate $100 billion over 10 years (2014-2023) toward environmental solutions and activities that reduce the impacts of climate change around the world.”

Are Young’s expectations more outrageous than the Big Three networks when it comes to climate change? It appears so. Young complained about big banks that have committed hundreds of billions — and in some cases trillions — of dollars, but not so long ago, the liberal media cheered Jeff Bezos for far less. Bezos pledged a fraction of what the “big four banks” have committed to combat climate change.

Former Amazon CEO Jeff Bezos made headlines when he pledged $10 billion dollars of his personal wealth to form the Bezos Earth Fund. To put that in perspective, Chase Bank, at $2.5 trillion over 10 years, promised 250 times more than Bezos did.

Young’s comments followed a public spat with Spotify where Young threatened to leave the platform if Joe Rogan remained. Spotify kept Rogan and Young removed his music from Spotify in protest.