According to the International Energy Agency’s (IEA) Coal 2021 report, coal-fired electricity generation reached an all-time high in 2021, increasing a whopping 9% in 2021. 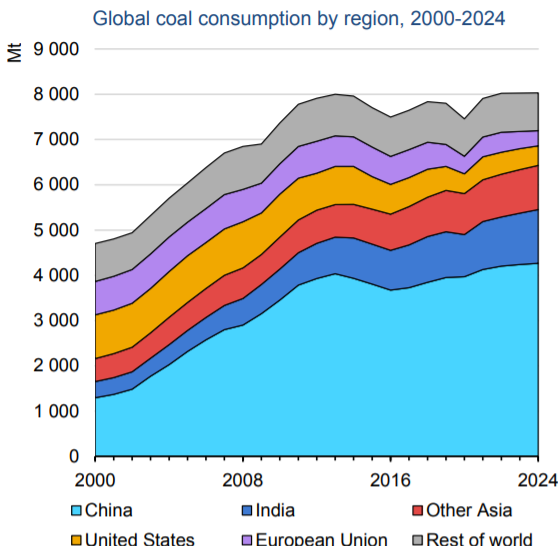 The increase was driven by the rapid economic recovery. Globally, a total of 10,350 terawatt-hours of electricity was generated from coal.

Even worse in terms of the climate protection perspective, the IEA report says that global coal demand could well reach a new all-time high in the next two years and would likely stay near these levels for the next few years.

More than 600 new coal-fired power plants are planned in Asia.

The IEA says China and India now account for two-thirds of global coal consumption, despite their efforts to expand renewables and other low-carbon energy sources.

“Without strong and immediate action by governments to tackle coal emissions – in a way that is fair, affordable and safe for those affected – we will have little, if any, chance of limiting global warming to 1.5 °C,” IEA Executive Director Fatih Birol said.

The IEA report comes just over a month after the end of the COP 26 climate summit in Glasgow, Scotland. The agreement reached at COP 26 aimed to build on the Paris Agreement and prevent the worst impacts of climate change.

The IEA forecast for the future:

At the same time, countries such as Viet Nam, the Philippines and Bangladesh, where very strong growth in coal demand had been expected a few years ago, are now set to show more modest increases as they shift more towards sources of electricity that are less carbon intensive. However, global coal trends will be shaped largely by China and India, who account for two-thirds of global coal consumption, despite their efforts to increase renewables and other low-carbon energy sources. In China, coal demand growth is expected to average less than 1% per year between 2022 and 2024. In India, stronger economic growth and increasing electrification are forecast to drive coal demand growth of 4% per year. India’s growing appetite for coal is set to add 130 million tonnes (Mt) to coal demand between 2021 and 2024. For most industrial purposes where coal is used, such as iron and steel production, there are not many technologies that can replace it in the short term. Based on current trends, global coal demand is set to rise to 8 025 Mt in 2022, the highest level ever seen, and to remain there through 2024.”