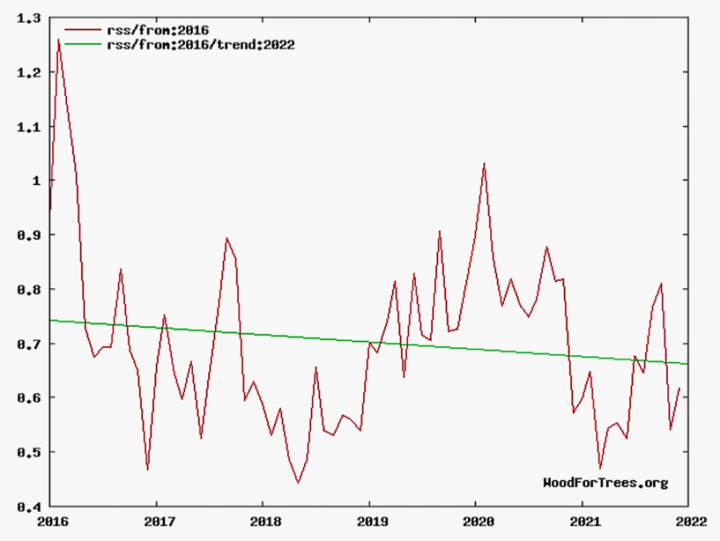 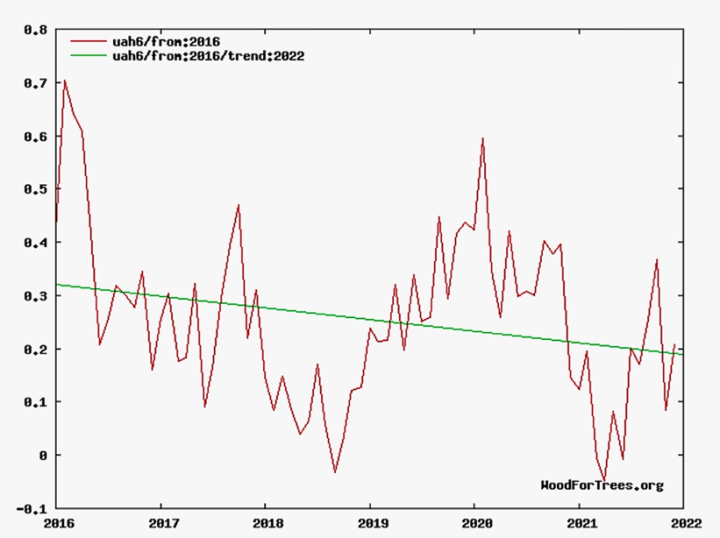 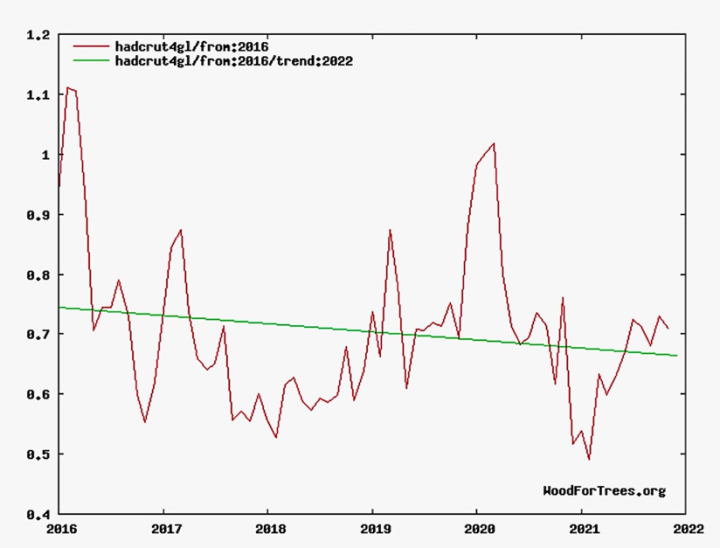 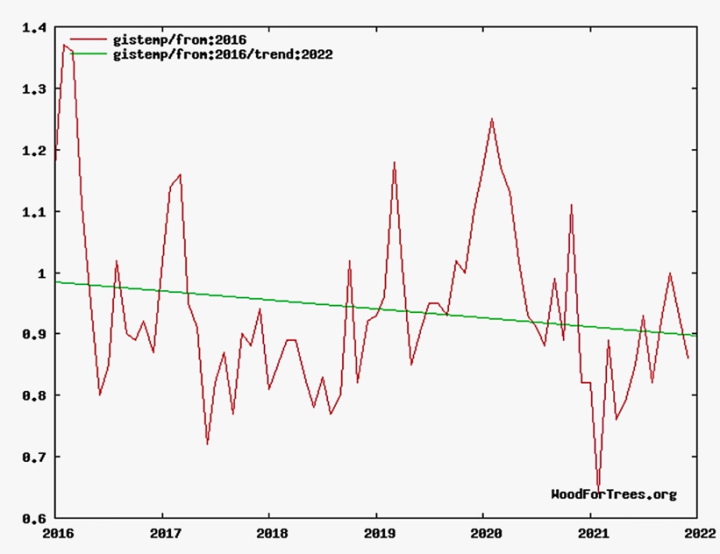 The World Has Been Getting Much Colder For The Last Six Years – Paul Homewood analysis: ‘There has been no statistically significant warming since 1998’Meteorologist

Flashback: Here we go again! Media hypes alleged ‘Hottest year’ declarations – Book excerpt - MIT climate scientist Dr. Richard Lindzen: “If you can adjust temperatures to 2/10ths of a degree, it means it wasn’t certain to 2/10ths of a degree.” - “We’re talking about less than a tenth of degree with an uncertainty of about a quarter of a degree. Moreover, such small fluctuations—even if real—don’t change the fact that the trend for the past 20 years has been much less than models have predicted.”

Despite the usual climate alarmist grossly exaggerated hype by NOAA and NASA in their year 2021 annual reports trying to conceal the clearly obvious downward global temperature anomaly measurement trends while global atmospheric CO2 levels are continuing to climb the annual global temperature anomaly outcomes for year-end 2021 and the last six years do not support and in fact clearly dispute recent climate alarmist claims that we are in a “climate emergency” driven by man-made CO2 emissions. 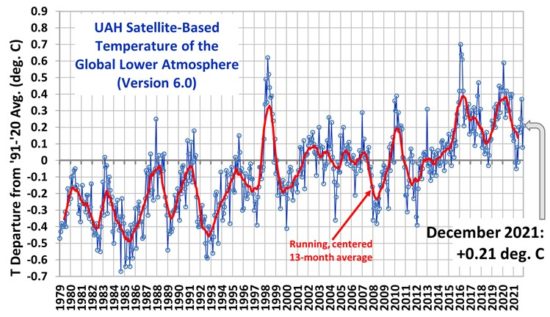 You might also note that the satellite data begins in 1979, which just so happens to be the coldest period of the 20thC. At the time it was acknowledged that global temperatures had decline by 0.5C since 1940, which offsets most of the increase since 1979. This decline in temperatures coincides with the cold phase of the Atlantic Multidecadal Oscillation, which has been in warm phase since the 1990s and is soon due to revert to cold.”

2021 ‘a disappointment for climate worriers’ – ‘2021 wasn’t the hottest year on record. Nor was it 2nd hottest, or even 3rd hottest. Nope, not 4th hottest either’ – MARK HODGSON: “I think this is what is called spin. 2021 must have been a disappointment for climate worriers keen to ratchet up panic and demands for ever-more urgent action to reduce greenhouse gas emissions.” The headline “Europe experiences average temperatures during the winter and spring and a year of temperatures outside the ten warmest years” didn’t fit the bill.
2021 Ends with Cooler Ocean Temps
#
2021 wasn’t THE hottest year so warmists came up with claim about ‘past 7 years’ being ‘hottest on record’ – But ‘It’s been cooling for 6,000 years’ – Jo Nova: Magical seven-year record wins the Hottest-ever Bingo of 2021. Why does “seven years” suddenly matter? “The last 500 years has been the coldest of the last 5,000.” -“Two can play Climate Bingo. In the history of human civilization, we’ve never lived through six centuries that were colder than the last six. Maybe that’s more important than a 7-year hot record in the “blip” at the end?”

“It’s been cooling for 6,000 years. The blip of modern warming is higher than the graph shows (which stops in 1950). Things might be the same temperature now as a thousand year ago. But all the records we set today are nothing in the big scheme.”

Update: Wired mag: The World Was Cooler in 2021 Than 2020. That’s Not Good News – Excerpt: One reason for cooler temperatures in 2021 was likely La Niña, a band of cold water in the Pacific. … The Covid-19 pandemic may have had an additional influence, but not in the way you might think. As the world locked down in 2020, fewer emissions went into the sky, including aerosols that typically reflect some of the sun’s energy back into space. “If you take them away, you make the air cleaner, then that’s a slight warming impact on the climate,” said Gavin Schmidt, director of NASA’s Goddard Institute for Space Studies, during a Thursday press conference announcing the findings. But as economic activity ramped back up in 2021, so did aerosol pollution, contributing again to that cooling effect. The 2021 temperature drop “may be possibly due to a resumption of activity that produces aerosols in the atmosphere,” Schmidt said. … While global temperatures were cooler in 2021 than the year before, last year 1.8 billion people lived in places that experienced their hottest temperatures ever recorded, according to a report released today by Berkeley Earth. This includes Asian countries like China and North and South Korea, African nations like Nigeria and Liberia, and in the Middle East places like Saudi Arabia and Qatar. “We talk a lot about global average temperatures, but no one lives in the global average,” says Zeke Hausfather, a research scientist at Berkeley Earth. 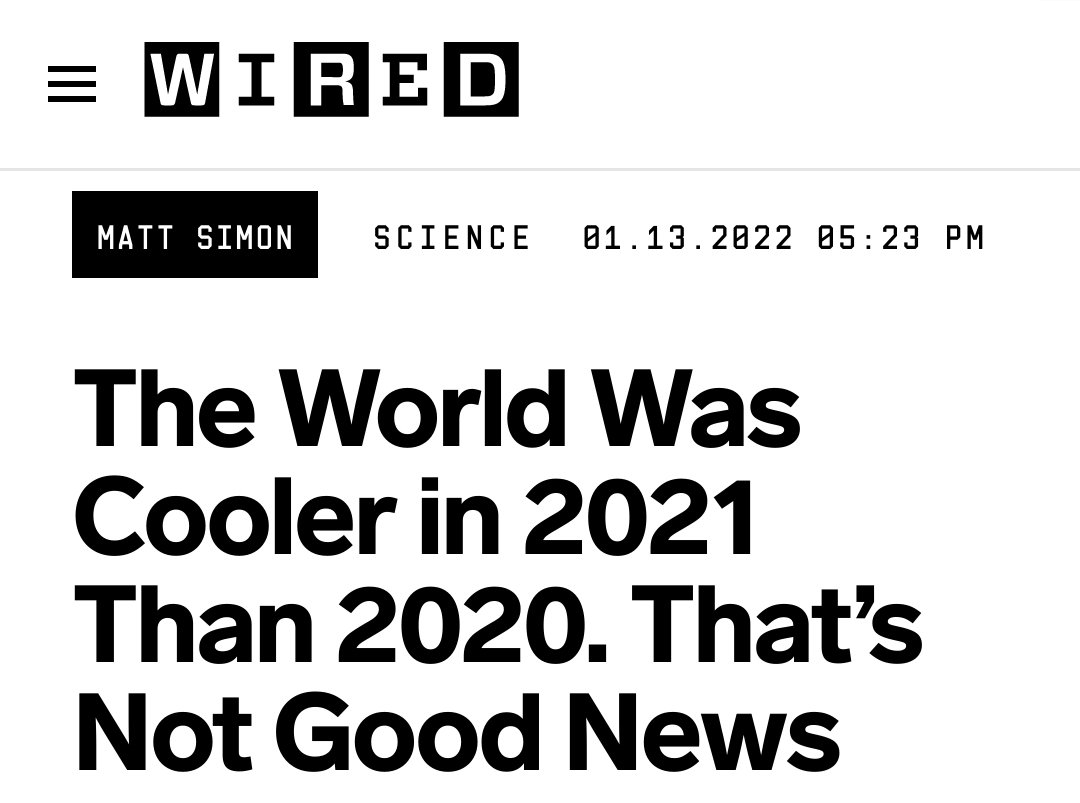 .
‘Global temperature was on course to meet the 2-degree target without any emissions cuts’ – Will the Climate Industry Move the Goalposts Again?
Nearly 140 Scientific Papers Detail The Minuscule Effect CO2 Has On Earth’s Temperature
Meteorologist Dr. Ryan Maue: ‘Remove abrupt forced cooling from Mount Pinatubo & your eyeball may discern a 25-year pause/hiatus or period of very slow global warming’
Flashback: Here we go again: 2020 claimed to be ‘tied with 2016’ for ‘Hottest year’ declaration

Retired MIT climate scientist Richard Lindzen has ridiculed “hottest year” claims. “The uncertainty here is tenths of a degree. When someone points to this and says this is the warmest temperature on record, what are they talking about? It’s just nonsense. This is a very tiny change period,” Lindzen said.

“If you can adjust temperatures to 2/10ths of a degree, it means it wasn’t certain to 2/10ths of a degree.” Lindzen pointed out, “We’re talking about less than a tenth of degree with an uncertainty of about a quarter of a degree. Moreover, such small fluctuations—even if real—don’t change the fact that the trend for the past 20 years has been much less than models have predicted.”