The results are a major blow to the high greenhouse-gas climate sensitivity modelers.

IPCC scientists have a favorite wild card they often use to explain serious model discrepancies: aerosols. Mysterious cooling events in the past are often explained away by aerosols from major volcanic eruptions, for example. They act to filter out sunlight.

According to IPCC climate models, the mean global temperature should have risen by 1.5°C since 1850 due to the higher CO2 concentrations. But best estimates show that it has instead risen by only 1.1°C. So what about the missing 0.4°C?

Naturally, the missing 0.4°C of warming since 1850 gets explained by the higher 20th century aerosol levels in the atmosphere – due to the burning of fossil fuels. Air pollution by man over the course of the late 19th century and entire 20th century are said to have dimmed the earth, and thus this explains the 0.4°C less warming.

Surprise: global aerosol emissions have been flat over past 250 years

But now results by a new study appearing in the journal Science Advances by Liu et al tells us that the forcing by aerosols had to have been overestimated by climate modelers. IPCC modelers insisted that 20th century aerosol concentrations were higher than during the pre-industrial times, and this is what kept the climate from warming by 1.5°C.

According to the scientists led by Liu, however, atmospheric aerosols in the preindustrial times were just as high as they were just recently. They were in fact more or less constant over the past 250 years. No change means it could not have been aerosols putting the brakes on temperature rise: 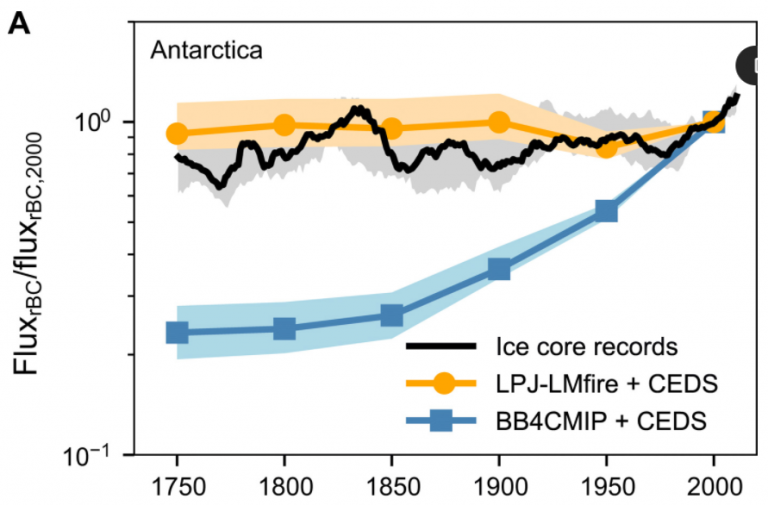 That’s a real embarrassment for the IPCC modelers. It means CO2 climate sensitivity has been overestimated.

The above chart is the result they found from records of 14 Antarctic ice cores and 1 central Andean ice core. These tell us that “historical fire activity in the Southern Hemisphere (SH) exceeded present-day levels”. Forest fires back then were much worse, and so more aerosol emissions were greater than modelers believe!

The researchers found that instead of aerosols increasing during the 20th century, they likely in fact decreased by 30% over the 20th century! This means that aerosols could not have suppressed the warming by 0.4°C, meaning the climate sensitivity by manmade greenhouse gases has to be dialed back accordingly.

The models have got the aerosols all wrong.

The new findings are underpinned by earlier findings in a 2018 study by Hamilton et al, who also found “significantly increased aerosol concentrations in the pre-industrial atmosphere.”

“The high natural aerosol emissions of the preindustrial time are thus clearly a global phenomenon,” reports Die kalte Sonne. “The documented constancy of the aerosol total emissions are in stark contradiction to the assumptions in the IPCC climate models.”

CO2 warming effect has to be much less

“The consequences for the climate models could be enormous,” Die kalte Sonne adds. This means that CO2’s warming effect thus has to be much less. “The study tells us that the CO2 climate sensitivity indeed has to be in the lower range of the IPCC’s 1.5-4.5°C warming for a doubling of CO2.”