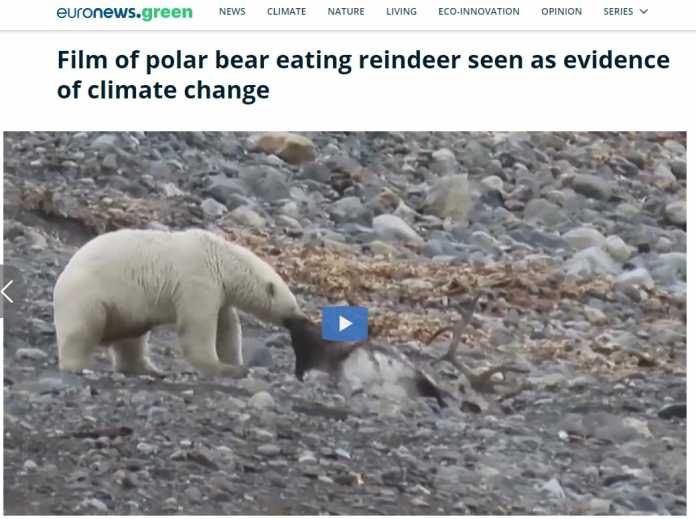 In yet another failure of basic journalism, dozens of media outlets around the world have been parroting the claim that a video of a polar bear hunting, catching, and eating a reindeer is evidence of climate change. It isn’t, and the claims don’t stand up to even the simplest probing of scientific reasoning.

For example, the India Times trumpeted this headline:

Rare footage of a polar bear chasing a reindeer into the water and killing it could be another stark indication of climate change.

Eating reindeer has become a matter of both necessity and opportunity for polar bears.

But it is largely being seen as yet further evidence of a changing climate.

Reporters such as Churm rarely bother to check any facts before making such claims. Polar Bears, and bears in general are all omnivores. They eat what is available to them. Watching the video, it is apparent the reindeer simply made a tactical blunder while being chased, and went into the one environment where ursus maritimus (aka sea bear) excels. I highly doubt the reindeer could be caught on land, bears can’t run as fast as them, but they are excellent swimmers and can swim for several hours at a time over long distances. Reindeer, not so much.

And, this is not new behavior, it is documented as far back as 1968, and the behavior likely has been going on for centuries before we arrived in the Arctic; so it is not likely to be an indication of climate change over a long period.

Zoologist Dr. Susan Crockford also noted the video and wrote about it on her website Polar Bear Science, Caught on film: polar bear stalks, kills and eats a Svalbard reindeer but climate change is hardly to blame.

Crockford points out that the claim is hype, not science,

The possibility that a polar bear somewhere in the Arctic might occassionally be successful at stalking and killing a reindeer (aka caribou) shouldn’t surprise anyone, let alone a biologist on Svalbard. But having video footage of the event makes it immediately newsworthy, especially when the researchers vaguely suggest that global warming might be to blame.

Crockford also correctly points out that other issues are in play, most notable being the fact that there are more bears, more reindeer, and more humans with cameras in the Arctic than 50 years ago. She adds,

The UK DailyMail story played up the climate change angle, even though the paper presents reduced summer sea ice as only one of two options for more polar bears hunting reindeer on Svalbard over the last 20 years: the other option being more bears and more reindeer. Population numbers of polar bears and reindeer in the early 1970s were so low that protections were put in place and surprise (!), numbers of both species are much higher today (Aars et al. 2017; Prop et al. 2015;Stempnlewicz et al. 2021). More bears and more reindeer mean more possible encounters and more potential reindeer kills.

I would have added that there are also more people with cameras across the Arctic than there were in the 1970s, which is highly relevant to the current example. More people with smart phones and video cameras means a higher likelihood that someone, somewhere, will capture polar bear behaviour no one has ever been able to document.

Just like we see more tornadoes, hurricanes, flash floods, and other disasters on the news due to more people with cameras (storm chasers) and 24/7/365 news coverage where anyone can upload a video to a news outlet and within minutes be seen worldwide, so has the ability to capture videos of polar bears, doing what polar bears do; hunt and kill prey.

Polar bears would not be successful apex predators in one of the harshest environments on Earth if they were not this smart and opportunistic. However, it does not mean that polar bears in general are eating a “more terrestrial diet” because of reduced summer sea ice, as the authors of this paper suggest (a very few bears do; most don’t).

It does indicate that conservation practices initiated in the 20th century that were meant to bolster reindeer and caribou numbers (similarly true for beluga, walrus, and geese) have resulted in more chances for polar bears to be successful in the 21st century despite reduced summer sea ice. Oddly, this seems to have caught some biologists by surprise.

Nature always finds a way, and these “smarter than the average bears” also seem to be smarter than the biologists and the reporters that rush to blame anything polar-bear related on global warming, aka “climate change.”