The Amundsen Scott station at the South Pole recorded a mean temperature of -60.9°C for the April 1 to September 30 period, according to the US National Snow and Ice Data Center (NSIDC). For the June-July-August period, the mean was minus 62.9°C  — the second coldest recorded. 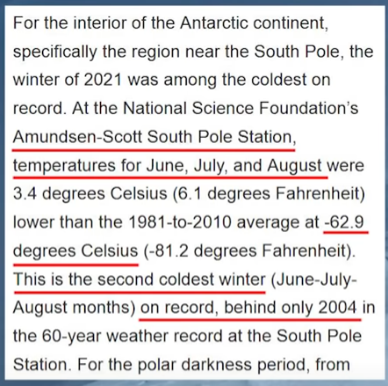 Apparently the 140 or so ppm added CO2 couldn’t trap enough heat to prevent a record cold from being set. The previous record for June-July-August was set in 2004.

Die kalte Sonne reports that a record was also set at the German Neumayer Antarctic station, located on the Antarctic coast, which saw a mean June-July-August temperature of -28.6°C.

Recording at the Neumayer station began in 1985, and the linear trend over the past 35 years has fallen by almost 3°C! It’s been cooling even faster since 2000: 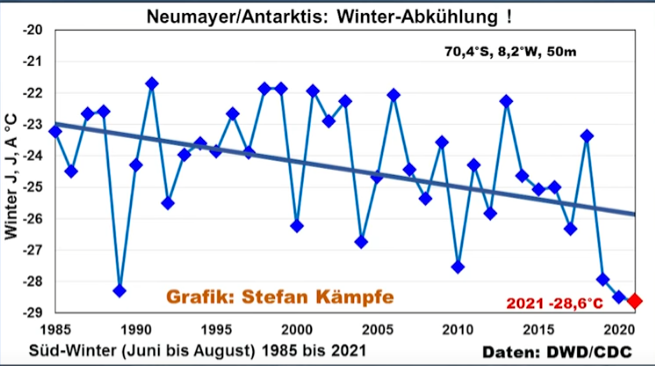 The German Neumayer Antarctic station has seen a distinct cooling trend since 1985, according to data from the German DWD national weather service. This is not getting reported by the media in Germany in any way, shape or form. We can just imagine the blaring headlines if the trend instead had shown 3°C of warming. You’d have a thousand German journalists descending on the South Pole by now.

Last February, for example, the German Berliner Morgenpost reported how for the first time the temperature had climbed over 20°C at the northern tip of the Antarctic peninsula – Seymour Island. “At the South Pole, climate change is very clear,” declared the Morgenpost.

However a subsequent World Meteorological Organization (WMO) investigation found the reading had in fact nothing to do with climate change, Die kalte Sonne reports:

The 20.75°C “record” reading resulted from a faulty instrument, and thus was nullified last July.

Yet, activist groups like Germany’s DUH don’t want to hear any of it. They continue to cite the nullified record even today for gathering petition signatures.