Pentagon: Climate & China are ‘equally important’ threats to US

The chief Pentagon spokesman said Wednesday that climate change and China are “equally important” threats to the United States, adding that it “doesn’t do anybody good” to make a “relative” assessment of national security issues.

John Kirby was pressed during a briefing on comments made by House Speaker Nancy Pelosi during the COP26 UN Climate Change Conference in Scotland this week, during which she stated that the US military is a “larger polluter than 140 countries combined.”

Kirby told reporters that he had not seen the comments, but said that the Pentagon knows they “are the largest emitter here in the federal government.”

Kirby added that that the Department of Defense believes climate change is a national security threat due to the potential damage to US facilities and “instability and security that it will cause in other places around the world — which will no doubt require US military assistance going forward.”

Fox News reporter Lucas Tomlinson then asked whether China or climate change was a bigger threat to the US, as defense officials continue to worry about potential missile tests and attacks by Beijing.

“I think we get paid to examine all the threats to our national security, and I don’t know that it does anybody good to put some sort of relative analysis assessment on that,” said Kirby, who emphasized that climate is a “real and existential national security threat. 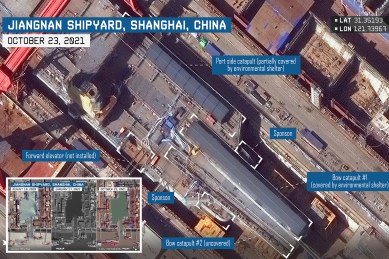 “And we consider China as the number one pacing challenge for the department,” he added. “Both are equally important.”

Not long after, Tomlinson asked Kirby again to identify the worst threat between climate and China.

“Lucas, I think I answered your question,” Kirby answered.