Analysis: Hurricanes Have Not Gotten More Intense, Frequent Over Past 170 Years

In the latest climate and energy video by German site Die kalte Sonne, media claims of increasingly stronger and frequent hurricanes are examined closely and reach the conclusion: “Over the past 170 years, hurricanes have not occurred more frequently or gotten more intense.”

In the wake of hurricane Ida, a number of mainstream media outlets, like German ZDF, blared that hurricanes have gotten worse over the recent decades – due to global warming. But that statement has been found to be driven more by alarmism and activism, and not based on data.

Citing a new paper by Vecchi et al, 2021, appearing in the journal Nature, Changes in Atlantic major hurricane frequency since the late-19th century, the authors found: “The homogenized basin-wide HU and MH record does not show strong evidence of a century-scale increase in either MH frequency or MH/HU ratio associated with the century-scale, greenhouse-gas-induced warming of the planet.”

Hurricane recording before satellite observation started in 1972 was based on eye witness observation, meaning a number of hurricanes before 1972 never got recorded. After adjusting, the authors came up with the following chart: 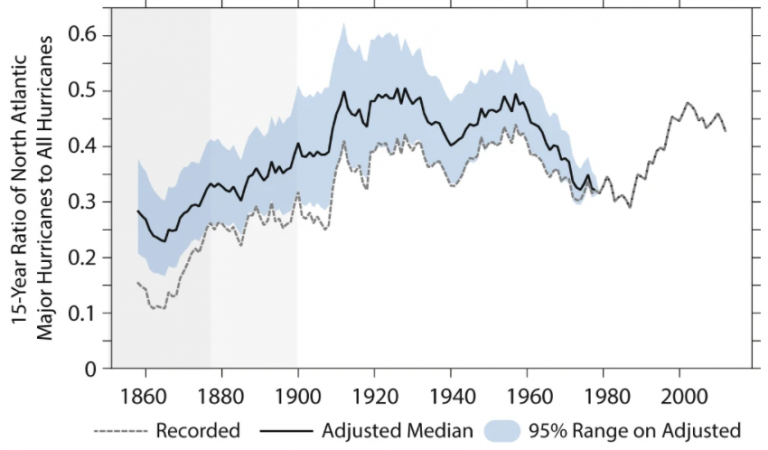 The adjusted median frequency for major hurricanes was higher in the 1920s and 1950s than after 2000.

The authors suggest that hurricane frequency is in large part modulated by the natural Atlantic oceanic variability:

Despite the 1°C global warming seen since the mid 18th century, hurricane intensity and frequency remained well with the range of natural variability and have not trended upwards. “If anything, it’s a decrease,” reports Die kalte Sonne.