CNN: Governments that have committed to reducing emissions are preemptively trying to send a firm message: This bolsters, not undermines, the case for investing in a broader mix of energy sources. "It's very clear that with energy in the long term, it is important to invest in renewables," European Commission President Ursula von der Leyen said Wednesday. "That gives us stable prices and more independence, because 90% of the gas is imported to the European Union." A global energy crunch caused by weather and a resurgence in demand is getting worse, stirring alarm ahead of the winter, when more energy is needed to light and heat homes. Governments around the world are trying to limit the impact on consumers, but acknowledge they may not be able to prevent bills spiking.
Further complicating the picture is mounting pressure on governments to accelerate the transition to cleaner energy as world leaders prepare for a critical climate summit in November.
In China, rolling blackouts for residents have already begun, while in India power stations are scrambling for coal. Consumer advocates in Europe are calling for a ban on disconnections if customers can’t promptly settle what they owe.
“This price shock is an unexpected crisis at a critical juncture,” EU energy chief Kadri Simson said Wednesday, confirming the bloc will outline its longer-term policy response next week. “The immediate priority should be to mitigate social impacts and protect vulnerable households.”
In Europe, natural gas is now trading at the equivalent of $230 per barrel, in oil terms — up more than 130% since the beginning of September and more than eight times higher than the same point last year, according to data from Independent Commodity Intelligence Services.
In East Asia, the cost of natural gas is up 85% since the start of September, hitting roughly $204 per barrel in oil terms. Prices remain much lower in the United States, a net exporter of natural gas, but still have shot up to their highest levels in 13 years.
“A lot of it is feeding off of fear about what the winter’s going to look like,” said Nikos Tsafos, an energy and geopolitics expert at the Center for Strategic and International Studies, a Washington-based think tank. He thinks that anxiety has caused the market to break away from the fundamentals of supply and demand.
The circumstances are causing central banks and investors to worry. Rising energy prices are contributing to inflation, which already was a major concern as the global economy tries to shake off the lingering effects of Covid-19. Dynamics over the winter could make matters worse.
…
An unusually long and cold winter earlier this year depleted stocks of natural gas in Europe. Soaring demand for energy has impeded the restocking process, which typically happens over the spring and summer. 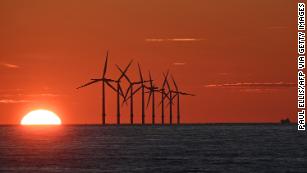 Europe’s gas crisis is also a renewables crisis, but there are ready solutions
China’s growing appetite for liquified natural gas has meant LNG markets can’t fill the gap. A decline in Russian gas exports and unusually calm winds have exacerbated the problem.
“The current surge in European energy power prices is truly unique,” energy analysts at the Société Générale bank told clients this week. “Never before have power prices risen so far, so fast. And we are only a few days into autumn — temperatures are still mild.”
…
The dynamics are reverberating globally. In the United States, natural gas prices have risen 47% since the beginning of August. The scramble for coal is also triggering a spike in the price many European companies have to pay for carbon credits so they can burn fossil fuels.
Additionally, the energy crunch is supporting oil prices, which hit seven-year highs in the United States this week. Bank of America recently predicted that a cold winter could push the price of Brent crude, the global benchmark, past $100 per barrel. Prices haven’t been that high since 2014.
…
There’s also anxiety that price volatility could feed public skepticism about funding for the energy transition, according to Gloystein, should consumers demand more investment in oil and gas to limit future fluctuations.
Governments that have committed to reducing emissions are preemptively trying to send a firm message: This bolsters, not undermines, the case for investing in a broader mix of energy sources.
“It’s very clear that with energy in the long term, it is important to invest in renewables,” European Commission President Ursula von der Leyen said Wednesday. “That gives us stable prices and more independence, because 90% of the gas is imported to the European Union.”