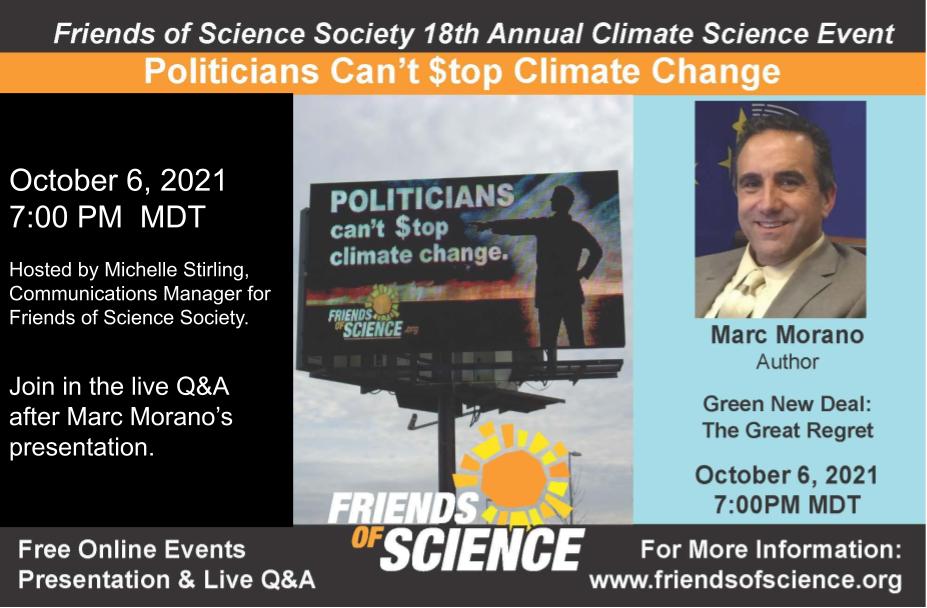 CALGARY, AB, Oct. 5, 2021 /CNW/ – As reported by the Victoria Times-Colonist on Oct, 1, 2021, Canada and Germany are pushing ‘wealthy nations’ for more climate money, and as COP26 approaches, climate activists are pushing for climate lockdowns and personal carbon rations, as Marc Morano reveals in his upcoming live stream “Green New Deal: The Great Regret” on Oct. 6, 2021, at 7 p.m. MDT on Friends of Science Society’s YouTube channel.

Morano is author of numerous popular books that skewer climate change hysteria, his most recent being “Green Fraud: Why the Green New Deal Is Even Worse than You Think”.

In his upcoming presentation, “Green New Deal: The Great Regret”, Morano exposes the hypocrisy and hype of climate activists in an entertaining way, but he points out these ideologues are deadly serious and intent on imposing climate lockdowns as well as a personal carbon ration.

Climate ‘madness’ in the media increases as the upcoming “26th Conference of the Parties” (COP26) event nears, which runs from Oct. 31 to Nov 12, 2021, in Glasgow. In concert with the rising climate change hysteria in the media, participating nations are also raising the ante for their cooperation.

Mark Carney, UN Special Envoy on Climate Change, has called for a $100 bn/year global carbon offset market, as reported by the Financial Times, Dec. 2, 2020. As Mark Schapiro noted in Harper’s Magazine in Feb. 2010 in “Conning the Climate“, carbon markets entail “the lack of delivery of an invisible substance to no one”. Despite Greta Thunberg’s vast global popularity and her association with the social engineering and carbon offset organization “We Don’t Have Time“, in April 22, 2021 testimony to the US House Subcommittee on Fossil Fuels and Climate Change, Greta admitted that her statements “Our house is on fire”…and “I want you to panic” were simply metaphors and are not based on any science. (51:00 Rep. Norman)

Thus, people should question COP26 demands to fund $100 billion that will be traded on an invisible substance that serves no purpose but would obviously be extracted from the pockets of COVID-impoverished and exhausted taxpayers. There is no valid science underlying the claim of an alleged “Climate Emergency” as shown by the Feb. 2021 work of Roger Pielke, Jr. and Justin Ritchie in “Distorting the view of our climate future: The misuse and abuse of climate pathways and scenarios“. Greta’s metaphorical claims, which have terrified millions of children and youth around the world, are at best, based on the implausible modeled scenario known as ‘RCP8.5’. Without that scenario, there is no climate emergency and we do have time.

Canadian energy economist Robert Lyman, former public servant of 27 years and 10 years a diplomat, reports in “Show Me the Money!” climate finance demands for developing nations have now far exceeded the already enormous $100 bn/year Green Climate Fund commitment promised during the Paris Agreement negotiations, to bribe developing nations to sign on. Lyman notes “demands for funding have greatly increased. India has demanded $1 trillion, and Africa has asked for an estimated $3 trillion to implement its emissions reduction plans by 2030.”

Referring to a COP26 document “A Five-Point plan for Solidarity, Fairness and Prosperity” Lyman points out that according to the plan the US might be on the hook for $80 billion per year, a far cry from the April 2021 commitment by U.S. President Biden to increase climate aid to $5.7 billion annually by 2024.

Lyman goes on to say “Interestingly, despite its status as by far the largest GHG emitter in the world and one of its wealthiest countries, China was not identified as requiring any changes in terms of its emissions and climate aid targets.”

Friends of Science Society is an independent group of earth, atmospheric and solar scientists, engineers, and citizens that is celebrating its 19th year of offering climate science insights. After a thorough review of a broad spectrum of literature on climate change, Friends of Science Society has concluded that the sun is the main driver of climate change, not carbon dioxide (CO2).