Data from the United Nations show these claims are false. The United Nations Food and Agriculture Organization (FAO) report, titled Fisheries and Aquaculture 2020, discusses the harvest of the variety of fresh and saltwater marine products, ranging from seaweed, to fin fish, to shell fish, and beyond.

“The fisheries and aquaculture sector significantly expanded in the past decades and total production, trade, and consumption reached an all-time record in 2018,” writes the FAO.

The FAO reports that between 1990 and 2018, wild fisheries production increased more than 14 percent, even as some countries implemented restrictions on fish harvests to help overharvested fish stocks recover. Over the same time period,  aquaculture production – including production from managed fish farms and shellfish beds – increased more than 527 percent.

As the graphics labeled Figure 1 and Figure 8 below from the FAO show, globally wild and managed marine food production has grown and sustained itself at a consistently high levels in recent decades. 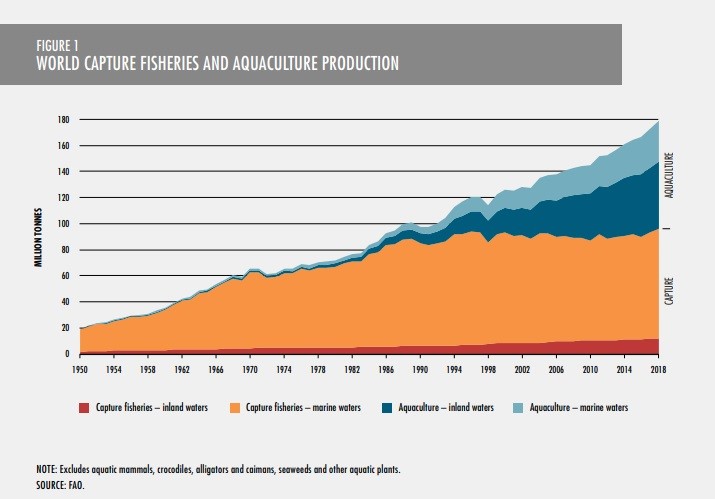 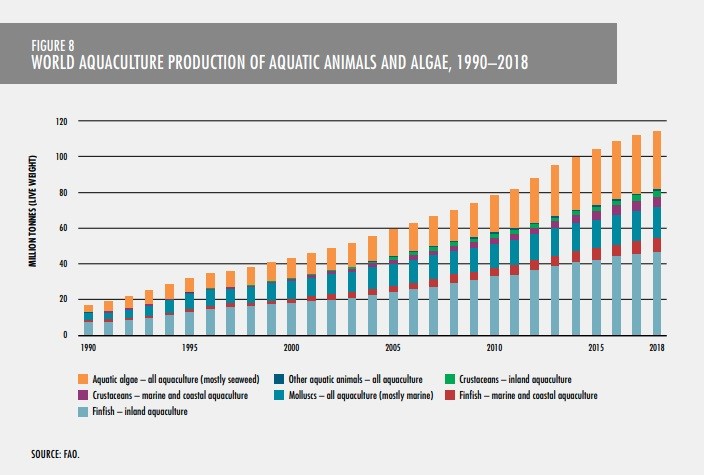 An earlier report from Our World Data also shows every class of harvested fresh and salt water species has increased dramatically in recent decades. (See the figure below) 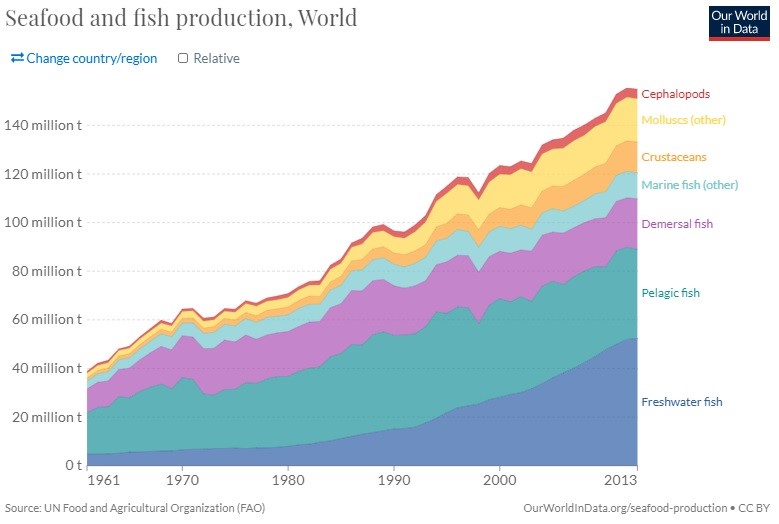 Those interviewed for the NBC’s story also complained climate change was making fish smaller, but science says that’s not true.

The size of some wild harvested fish has declined. The science publication Phys.org explained more than 10 years ago the reason the size of some wild harvested fish have declined is because of overfishing of some fish stocks, not warmer oceans as claimed by NBC. For many popular species, fishing fleets have harvested fully mature fish and are now harvesting younger, smaller, fish. The World Wildlife Fund has also pointed to overfishing as contributing to smaller fish being harvested. Fish aren’t shrinking, the number of fish reaching full maturity has.

Climate change cannot be blamed for rising seafood prices, as NBC tried to do, because the harvest of wild and farmed marine products has increased fairly steadily during the period of warming. NBC’s report is nothing more than a whopper of a fish story.

The price of seafood, as well as other food stocks, goods, and services, are increasing primarily as a result of government-induced inflation. Government policies, money printing, and deficit spending are resulting in rising prices across the economy.