Morano: "Ultimately, what it is going to do, it is leading to lower economic growth, which you would intuitively think, why would they want to do that? I have to go chapters in the book “Green Fraud,” Tucker, and why they want low economic growth. They love the lockdowns for this reason. They call it degrowth, planned recessions, this is that first step to transfer private equity, private finance into government hands, and this is a big step." Tucker Carlson: Hyperinflation. Well, we are joined tonight by someone who can assess the environmental parts of this bill, Marc Morano is the author of “Green fraud: Why the green new deal is even worse than you think it is,” a book with a title that sells itself. How much of this bill is geared not toward cleaning up the environment, which we could badly use, but toward this global warming theory they have. How much of it is climate based?

Marc Morano: >> First of all, Jen Psaki was asked today why the infrastructure built is called when it is only 5% of the bill going to infrastructure, the roads and bridges, and her answer this is a once-in-a-lifetime, generation. To answer your question, Tucker, we do not know the exact percentage but we know it will affect things like health care and equity and all sorts of green buildings and changing all of the climate aspects, the green new deal, are being implemented throughout this whole infrastructure bill. They are redefining the word infrastructure to mean climate activity. And this is just — this was part of their plan because Biden is also making every cabinet a climate agency, from State Department to interior to Defense Department, financial institutions, so this bill is just the latest in a round of what they are doing because they learned in 2009, they can’t put a climate agenda straight on the American people with a vote on Capitol Hill. Even when Obama had the House and Senate, they failed to get a carbon tax passed because Democrats opposed it. So they are trying to slip it in. In this stealth way. That is what they have been doing since January.

Tucker Carlson: The two things they wanted war reparations on the green new deal. Both pulled bad with the public, so they rebranded them. Not to be cynical, but no one is cynical and they put a senile guy in the White House. That is what they are doing.

Marc Morano: It is what they are doing. They are still probably going to introduce the Green New Deal at some point. This deal, when you’re talking about roads, look at where the Progressives are, where the Biden administration is on roads. And on transportation. We had Andrew Yang proposing — Democrat candidate now running for mayor of  New York, proposing an end to private car ownership and instead a fleet of roving electric cars. When it comes, talking about zoning, we had Elizabeth Warren proposing no more new home construction unless it was “Zero carbon footprint.” We have UCLA professors saying we should abolish private homeownership because in a climate emergency, it’s just too damaging to the Earth. This is what they are doing now, behind the scenes, where the public can’t see it, is the beginning of all of this. Ultimately, what it is going to do, it is leading to lower economic growth, which you would intuitively think, why would they want to do that? I have to go chapters in the book “Green Fraud,” Tucker, and why they want low economic growth. They love the lockdowns for this reason. They call it degrowth, planned recessions, this is that first step to transfer private equity, private finance into government hands, and this is a big step.

Tucker Carlson: I don’t care about economic growth, I want to live a nice life and I want them out of my neighborhood and stop telling me what to do. This seems like a paragraph to me. I appreciate this. Thank you so much for coming on. 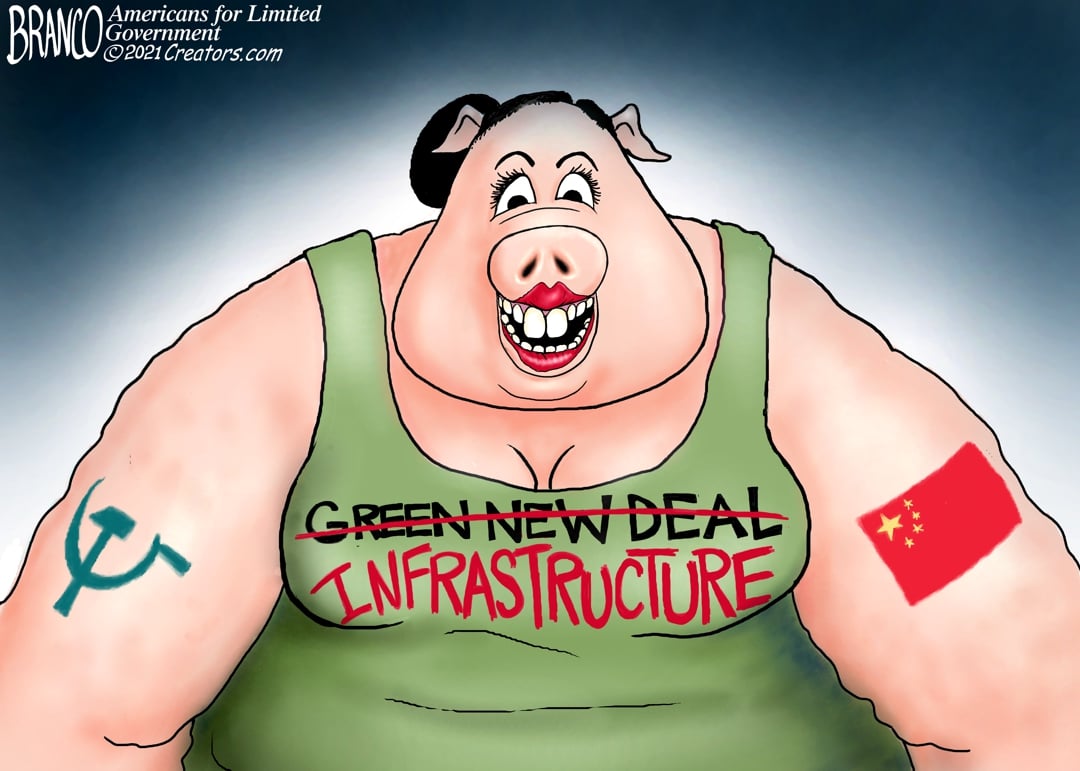 NYT: ‘The measure, called the American Jobs Plan, is the first step in a two-part agenda to overhaul American capitalism, fight climate change and try to improve the productivity of the economy. He said the second step, the American Family Plan, would come in a matter of weeks.”

U.S. Gets Ready To Go Full Venezuela On Economic Policy – The Biden White House put out what they call the “American Jobs Plan.” It’s $2.3 trillion of new government spending, on top of the $1.9 trillion just passed, and several trillion more to come, all on top of a $4 trillion or so annual level of baseline federal spending. Yes, it’s blowout government spending, on the usual issues pushed by advocacy groups, which supposedly will shortly achieve all the usual promises of the left: economic growth, increased economic fairness, and social justice. In other words, it’s the Venezuela economic program, blown up to U.S. scale and then tweaked a little here and there to buy off the squeaky wheels of the moment…in fact only about 5% of the spending was for anything that could be called actual public health measures related to the pandemic. The rest was “a grand orgy of vote buying and giveaways to left-wing interest groups.” Following the same playbook, this $2.3 trillion monster calls itself an “infrastructure” plan…But if you look for the numbers, you find that only a small minority of the money goes to anything you might think of as “infrastructure.” In the White House release about the new plan, no specific budget numbers are attached to any of the various programs and initiatives. However, they seem to have given out some proposed numbers to reporters, and the New York Times front page today has a chart of how much will supposedly go to what per the White House proposal. That chart gives a figure of $115 billion for “roads and bridges,” which at least sounds like infrastructure, but is only about 5% of the $2.3 trillion.

It’s the closest we’ve come to a realization of the Green New Deal, an ambitious collection of progressive proposals to combat climate change, racial injustice, and gender inequality as much as one to upgrade asphalt.”

Biden’s $2tn ‘infrastructure’ plan aims to ‘finally address climate crisis as a nation’ – President says new plan will allow ‘transformational progress’ by bolstering investments in clean energy and electric vehicles … Joe Biden has said his new infrastructure plan will allow “transformational progress in our ability to tackle climate change” by bolstering investments in clean energy, electric vehicles and building homes resilient to threats posed by the climate crisis. The $2tn plan will make “crumbling” American infrastructure more robust to extreme weather events, the US president said in a speech on Wednesday, while providing funds to “build a modern, resilient and fully clean grid”. Biden said that tax incentives should allow “all Americans to afford clean electric vehicles” and workers will be able to “seize amazing opportunities in a clean energy future”. …

Biden opened his White House term with a cavalcade of executive actions to begin the gargantuan task of shifting the US to net zero greenhouse gas emissions by 2050 and the new $2tn package, known as the American Jobs Plan, is the first indication of the scale of spending that will be required to reshape day-to-day life in order to avert disastrous climate change. … The package includes a major boost to clean energy research and development, as well as a proposal for a clean electricity standard – a mandate for utilities to phase out fossil fuels use across the grid to zero over the next 15 years that Friedmann said will be a “vital” element of eliminating planet-hearting emissions.

This is just Biden’s latest climate move, following the US rejoining the Paris climate agreement, pausing new oil and gas leasing on public lands, and creating high-level climate roles, task forces, and committees across the federal government. … Those earlier moves were executive orders largely focused on the steps Biden could take alone. In contrast, “The American Jobs Plan” is a proposal for Congress to green-light grants, tax breaks, job creation programs, and more to help the public, especially disadvantaged communities, prepare for and respond to the climate crisis. “The plan targets 40% of the benefits of climate and clean infrastructure investments to disadvantaged communities,” according to a White House fact sheet. “And, the plan invests in rural communities and communities impacted by the market-based transition to clean energy.”

Report: Only $650 Billion of Joe Biden’s $2.25 Trillion Infrastructure Bill Funds Roads and Bridges – The massive spending bill also includes $300 billion for housing, $400 billion for elderly and disabled care, and $300 billion to revive manufacturing in the United States, according to the Post. …The proposal will also feature nearly $400 billion in “clean-energy credits” to promote “green” energy such as wind and solar.

Trump Slams Biden’s Tax Hike & ‘Build Back Better’ as the ‘Largest Self Inflicted Economic Wound’ – Trump: Biden promised to “build back better”—but the country he is building up, in particular, is China and other large segments of the world. Under the Biden Administration, America is once again losing the economic war with China—and Biden’s ludicrous multi-trillion dollar tax hike is a strategy for total economic surrender. Sacrificing good paying American jobs is the last thing our citizens need as our country recovers from the effects of the Global Pandemic.