Tucker Carlson: We’re going to talk to Marc Morano, he’s the publisher of Climate Depot and author of the upcoming book “Green fraud.” He joins us tonight. Mark you saw what happened in texas overnight millions left without power people died and it seems pretty clear that a reckless reliance on windmills is the cause of this disaster is that is that right do you think?

Marc Morano: “That is absolutely right. All you have to do is look at the last four decades when it comes to wind power. It is chiefly driven by government policy and subsidies to the point where Warren Buffett famously said years ago that there’s no reason to build windmills without the tax breaks and without the subsidies. So what’s happened is three to four percent of our energy comes from solar and wind combined and what the Green New Deal is going to try to do is somehow make us zero carbon within the next decade and a half within two decades, depending on which plan you’re looking at. And we’re seeing the results of this and the same thing’s happening in Germany by the way right now Tucker. Their solar panels are covered in snow and Germans are freezing through winter much the way Texans are and who would have thought this would have happened in Texas but
this is what we’re dealing with. And Biden now wants to nationalize this plan of the less than four percent that comes from solar and wind and make it our chief go-to energy
source.

Morano: The biggest fraud of the Green New Deal that is the green fraud we have in the last few years gone from not just energy independent in the united states energy dominant the world’s largest producer of natural gas of oil and we went since the first time since 1952 when Harry S Truman was president in 1952.

“We went more energy exports than imports and then also in 2019 we had more energy production than uh more energy production than usage which means that was Dwight Eisenhower was president these were unprecedented numbers and if you like to say it was an all-of-the-above energy strategy but those kinds of numbers mean we don’t have to rely on foreign sources of energy. If you’re worried about endless wars and climate activists like Robert F. Kennedy Jr say it openly most of America’s wars have in one way or
another have been fights over energy and he’s of course referring to the middle eastern wars chiefly. Well we were in a position where we weren’t just independent we were dominant we had our own domestic energy so the Green New Deal is going to swap that for reliance on solar and wind an electric car by the way which is going to be rare earth minerals from china 90% of which dominates it things like cobalt copper, nickel. And we’re going to now be reliant on China for these rare earth minerals to make these unreliable solar panels and wind turbines and electric car batteries.

Tucker Carlon: Civilization exists because of energy. Marc. I appreciate coming on. 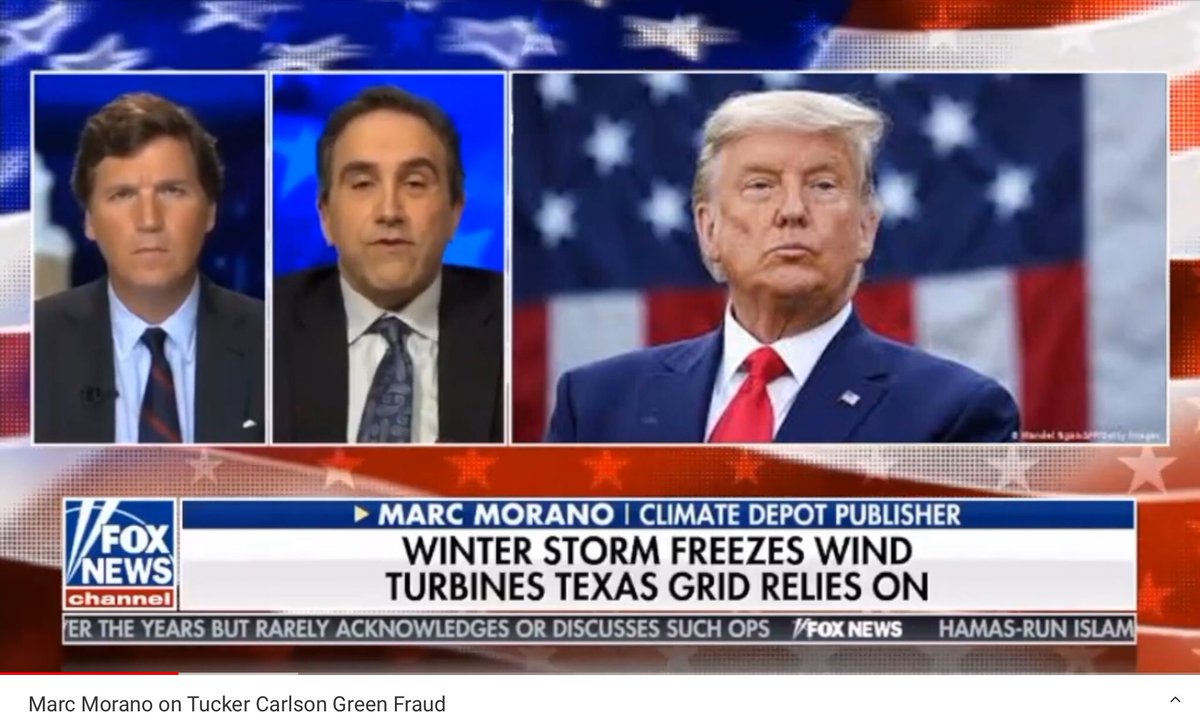 Tucker Carlson: The great Texas climate catastrophe is heading your way – Green energy means a less reliable power grid. Why do our leaders deny that? – Well, the good news is all that alternative energy seems to have had a remarkable effect on the climate. Sunday night, parts of Texas got the temperatures that we typically see in Alaska. In fact, they were the same as they were in Alaska. So global warming is no longer a pressing concern in Houston. The bad news is, they don’t have electricity. The windmills froze, so the power grid failed. Millions of Texans woke up Monday morning having to boil their water because with no electricity, it couldn’t be purifi

Cold snap leaves one dead, over 4 million without power in Texas Unreliables causing blackouts: ‘Nearly half of Texas installed wind power generation capacity has been offline because of frozen wind turbines’

Millions of Texans left without heat overnight in frigid weather: ‘A nightmare situation’

ERCOT and Oncor Call on All Texans to Conserve Electricity Through Tuesday due to "Frozen wind turbines and limited natural gas supplies" – NBC 5 Dallas-Fort Worth – https://t.co/xQRUlSQHFO

This Blizzard Exposes The Perils Of Attempting To ‘Electrify Everything’

Flashback: Investor Warren Buffet told an audience in Omaha, Nebraska. “For example, on wind energy, we get a tax credit if we build a lot of wind farms. That’s the only reason to build them. They don’t make sense without the tax credit.”

Sky News: Germany is held up as the world’s solar and wind capital by “renewables luvvies” but Germans are freezing through winter due to “millions of solar panels blanketed in snow” and turbines sitting idle, according to Rowan Dean. “Germany’s long been held up by the likes of these renewable luvvies, they say Germany’s the world’s great wind and solar capital,” Mr Dean said. “But as we speak millions of solar panels are blanketed in snow and 30,000 wind turbines are sitting idle because there’s no wind. “Freezing Germans shivering in their lederhosen’s are desperate for coal fired power to heat up their wurst and sauerkraut.”

Report from Texas Public Policy Foundation:  2018: The Texas Wind Power Story: Part 1 – How Subsidies Drive Texas Wind Power Development: “Texas has witnessed a boom in wind energy development over the past 15 years that put the state on the map as leader in renewable energy. The state remains attractive for further development due to the federal subsidies, public-funded infrastructure expansion, and the low barriers for wind power siting and construction. But the expansion of wind power has placed a strain on the state’s delivery system that resulted in large quantities of wind generation not making it to market. Texas ratepayers committed nearly $7 billion to resolve the issue but wind expansion is reaching a point where transmission congestion is returning.”

There is a lot of conflicting "information" about the TX blackouts. Here's the bottom line: the root cause of the TX blackouts is a national and state policy that has prioritized the adoption of unreliable wind/solar energy over reliable energy.

Texas was RELYING on wind for power… not the offline gas and coal plants.

They weren't expecting to use the conventional plants until next summer.

When the wind turbines froze, the conventional plants weren't prepared.

All else is blame-shifting and spin. https://t.co/vDa7oZJGJS

Politicians, rent seekers and ERCOT designed the grid to rely on wind.

That design failed under extreme conditions.

Not easy to fire up unused coal and gas generators from cold. https://t.co/6Y0yXwbLh0

Last September I explained why this would happen: https://t.co/CTttiOHj0C

Two images capture the cause and effect.

1) Unreliable wind and solar, subsidized and mandated at the expense of reliable nuclear, coal, and gas, disappear when needed most.

2) Millions of Texans without power when it's freezing cold. pic.twitter.com/NJoSkN8FQU

These plans should change.

Texas electricity "generation from wind farms slid from 42 per cent to 8 per cent" this past week: gas-fired power plant output soared to fill that gap AND meet huge demand increase. Probably good thing those gas turbines are still there.https://t.co/NUKr49l78l

If we end up with a rolling blackout tonight in #Texas, duration matters.

1- Those who live in completely electrified homes will suffer the most. A lesson for #California & others where they want to ban natural gas

Ice storms knocked out half the wind-power generating capacity of Texas as a rare deep freeze across locked up turbine towers.

“The massive blast of Siberia-like cold that is wreaking havoc across North America is proving that if we humans want to keep surviving frigid winters, we are going to have to keep burning natural gas — and lots of it — for decades to come.” https://t.co/4lFzZ4ETqV pic.twitter.com/GPDSjUoxwR

In Texas there is about $60 billion worth of wind, $9b of solar, $7b for the transmission to enable them, all sitting pretty much useless during this catastrophe.

Essentially all new investment is due to be the exact same stuff.

And in 2017: Obama touted green energy ‘investments’ at solar facility employing 5 workers, relying on $54 million in taxpayer subsidies — ‘That comes out to $10.8 million in tax-dollar subsidies per employee’ look at the amounts of energy produced per sector. (This tally does not include electricity generated by nuclear, hydroelectric and geothermal power plants.)

MUST SEE YOUTUBE: Tucker Carlson interviews Marc Morano about his new book, The Green Fraud.. and also discusses the impact of the current Winter Storm and FROZEN WIND TURBINES https://t.co/hRD9rrqlK5 via @YouTube pic.twitter.com/KnbGtx3S0p