Court Update: ‘The Mann vs Steyn case’ – ‘Motion for Summary Judgment’ – ‘The 8 years since Mann filed suit have only confirmed the essential truth of Steyn’s characterization of Penn State’

Excerpt from Steyn's MOTION FOR SUMMARY JUDGMENT: "Michael Mann’s ill-conceived and baseless eight-year-old libel suit against cultural commentator Mark Steyn has gone on long enough. Discovery, now over, has shown that this suit is not about defamation. ... The eight years since Mann filed suit have only confirmed the essential truth of Steyn’s characterization of Penn State. However embarrassing that might be for a prominent beneficiary of that regime, he cannot seek to have Steyn found liable for Penn State’s guilt: that is a legal nonsense. Like discovery, this case itself should end now too."

Flashback June 2020: Mark Steyn: “The Mann vs Steyn case is about to enter its ninth year in the choked septic tank of the District of Columbia (pending name change) “judicial” system.” … “The process IS the punishment.” The Costs of Mann Delay: or Michael E Mann, Loser (Again) and Deadbeat (for Sure) :: SteynOnline

Also see Mark Steyn’s devastating book: “A Disgrace to the Profession” – The World’s Scientists, In Their Own Words, On Michael E Mann, His Hockey Stick And Their Damage To Science – Compiled and edited by Mark Steyn, with illustrations by Josh

Mark Steyn has filed an eviscerating and well-informed Motion for Summary Judgement in the Michael Mann vanity libel suit. https://t.co/VCCfPtnhWq
with memorandum https://t.co/fp4kkAXdrW

2/ Steyn, for the most part, stayed out of the complicated SLAAP proceedings, holding his fire for the Summary Judgement phase. I’m not going to review or precis these documents, but will quote a couple of sizzling early paragraphs.
3/ Steyn notes that court previously identified issue as whether Penn State conducted “inadequate and ineffective investigations into their employees, including Sandusky and Mann”. Steyn: “it has been thoroughly adjudicated” and Mann’s mentor “is heading to jail”. 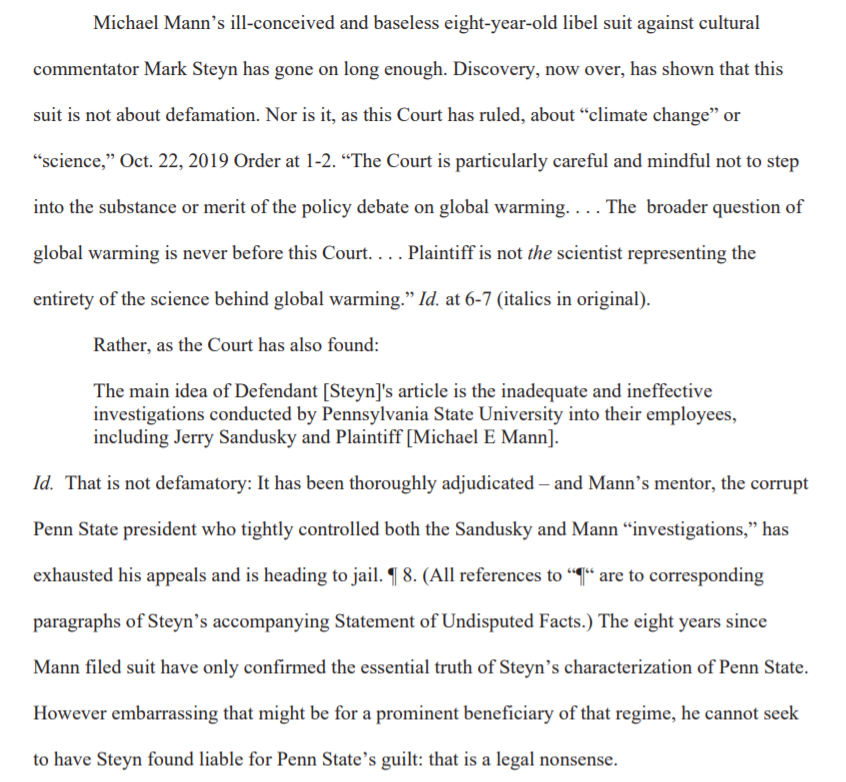 4/ rubbing salt in the open sore, brief says: “while Mann claims he was defamed by Steyn’s linking him with the Sandusky case, in his just-published book The New Climate War, Mann thanks one of the convicted criminals in the Sandusky case.” Ouch.

New Information on the Penn State Inquiry CommitteeIn today’s post, I’m going to report for the first time on information on the Penn State Inquiry Committee from an inside source (PS) who was familiar with the activities of the Inquiry…https://climateaudit.org/2011/11/15/new-information-at-penn-state/
6/ some astounding revelations in Steyn memorandum from discovery on Penn State conduct during investigation. Initial view of Inquiry Committee was that they “could not prove that [Mann was] not guilty” of first 3 counts and therefore would have to proceed to an investigation.

7/ in discovery, Foley said that Inquiry Committee “could not find anything to prove Mann’s innocence” and that, according to pleading, did not “exonerate” Mann.

8/ Steyn says that Foley “secretly” sent a draft of Inquiry Committee report to Penn State President Spanier (who is now a convicted felon in connection with Sandusky scandal) and that Spanier secretly replied to Foley with changes to report.

9/ Spanier then told Foley to be mindful of the impact that “bad publicity” of the Mann case would have on Penn State. Needless to say, in Freeh report on Sandusky case, Spanier’s concern about bad publicity also marred Penn State’s handling of that case. 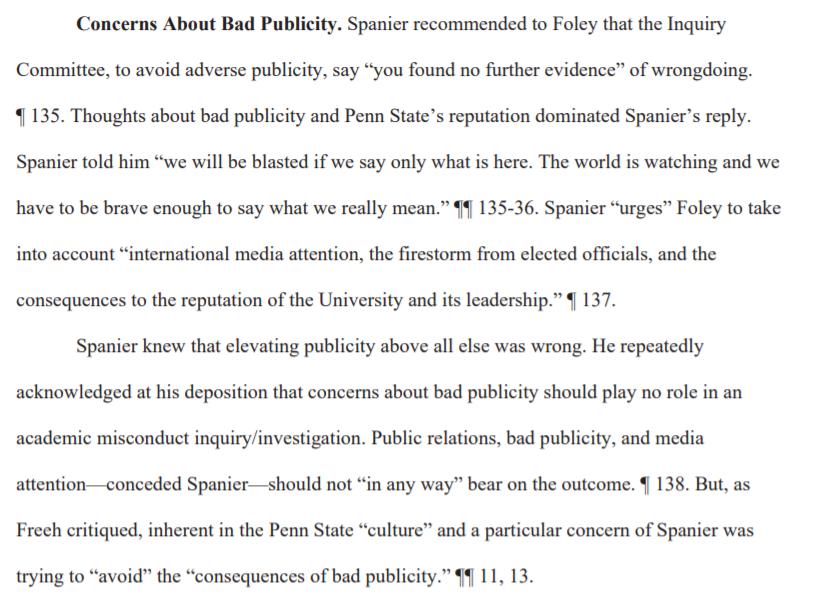 10/ the brief goes on and on, revealing the failings of the Penn State inquiry and investigation in excruciating detail.

keep in mind (1) that Mann's lawsuit claims that he was "exonerated" and (2) that function of Inquiry Committee was NOT to determine guilt, but to determine whether to proceed to investigation. Don't read this phrase out of context.

I was woefully behind on this issue, but reading this helped bring me up to date, I think. I didn’t know a court filing could be written this way, though. It started out more like a moderate polemic, and then settled down into being very informative. It was also very readable.

I hadn’t known any of the details it contains about the Penn State committee that was supposed to investigate Mann. It fits my preconceived notions of how the deep state works to protect its own, though. For example, a member of the committee who had recused himself continued to be involved behind the scenes. And the President of the university, to whom the committee was supposed to be reporting, was giving feedback and suggestions regarding the drafting of the report.

Steyn makes the point that the Michael Mann case is of one piece with the Jerry Sandusky case, in which Penn State also fostered a culture in which the university’s reputation was temporarily protected at the expense of ethical considerations.