China President Xi’s Climate Con Trick: Continue to increase CO2 emissions through at least 2030, but ‘aim’ to stop doing so before then

President Xi was busy pulling the wool over the eyes of the West at last weekend’s Climate Summit:

Chinese dictator Xi Jinping announced at this weekend’s Climate Ambition Summit that his nation, the world’s leading carbon dioxide emitter, would continue to increase carbon emissions through at least 2030, but “aim” to stop doing so before then.

The Paris Agreement, a global climate change document to which China is a party, allows China to increase emissions while imposing onerous requirements to cut emissions on “developed” nations. President Donald Trump withdrew the United States from the agreement, signed by the Obama administration, in 2018, but likely successor Joe Biden has vowed to re-sign the agreement immediately upon becoming president.

China regularly applauds itself as an environmentalist champion through its state media. Yet, in addition to being the world’s worst carbon emitter, China is responsible for widespread environmental destruction around the planet, including the destruction of coral reefs in the South China Sea and the increasingly concerning overfishing of the Galápagos Islands, where Chinese ships are not legally allowed to fish.

The Climate Ambition Summit, a U.N. event, occurred online; Xi addressed the summit from Beijing on Saturday night local time. The dictator again made clear that China promised nothing on climate action before 2030, a decade from his address.

“We aim to peak carbon dioxide emissions before 2030 and achieve carbon neutrality before 2060,” Xi said, according to the state news agency Xinhua.

“Today, I wish to announce some further commitments for 2030: China will lower its carbon dioxide emissions per unit of GDP by over 65 percent from the 2005 level,” he explained, “increase the share of non-fossil fuels in primary energy consumption to around 25 percent, increase the forest stock volume by 6 billion cubic meters from the 2005 level, and bring its total installed capacity of wind and solar power to over 1.2 billion kilowatts.”

He was of course careful not to promise any cut in emissions before 2030, nor give any sort of timetable of specific cuts thereafter. Nevertheless, there is no doubt that Sleepy Joe and the EU will have fallen hook, line and sinker for his trickery.

But let’s look more closely at what he did promise:

In fact, as we can see below, China’s Paris commitment already promised to lower emissions by 60% to 65% of GDP, so this new announcement offers little new:

As I have commented many times in the past, energy usage per unit of GDP always falls sharply as economies mature, growing particularly into low energy intensive sectors, such as services and technology.

There never was anything radical about China;’s pledge, and it was clear in 2015 that this was one commitment that would easily be reached with little effort.

China did not include any target for wind and solar at Paris, except for a 2020 objective.

It is notable however that solar installations peaked in 2017, while wind installations have hardly been rocketing. This would suggest neither technology will thrive without heavy subsidies or policy mandate. 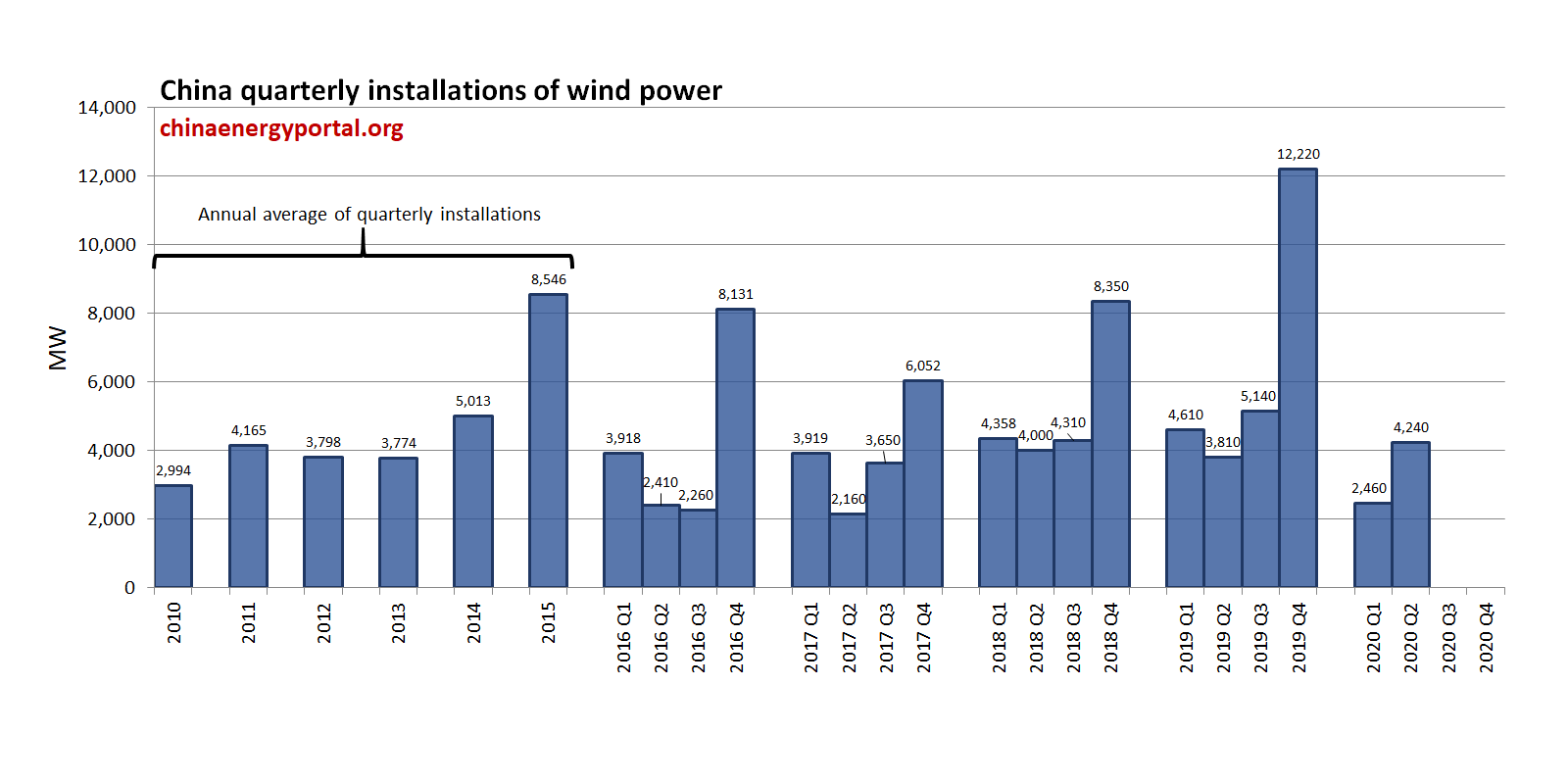 However, total power demand is also expected to rise by 300 TWh each year, about 4% a year. Consequently the proportion of wind/solar is only going to rise to 16%, well below current UK levels.

To put it another way, while wind/solar generation is 1069TWh higher in 2030 than now, total demand rises by 3000 TWh, meaning two thirds of the increased demand will need to come from elsewhere.

The Paris commitment, you will have noted, was 20%, so this is an improvement. However, as we have seen, the stated plans for wind and solar will only meet a small part of this switch.

Assuming primary energy consumption continues to rise at about 2% a year, the contribution from wind/solar will only have gone up from 4% to 8%.

The target of 25% non fossil fuels implies an increase in fossil fuel consumption from 120 to 135 Exajoules (EJ) – in turn suggesting a rise in emissions of 12%.

New hydro development seems to have dried up, which only leaves nuclear power to do the heavy lifting – my projections going from 3 to 17 EJ:

To hit 17 EJ of nuclear, equivalent to 2000 TWh, would require capacity of about 250GW, compared to the current capacity of 48GW.

China’s 13th Five-Year Plan, published in 2016, targeted 58GW by the end of this year, plus another 30GW under construction. The first certainly won’t be hit.

Although they have yet to announce their next plan, it must be exceedingly unlikely that China will get anywhere near 250GW in 2030.

Put simply Xi’s “pledge” does not stack up.

This is a small increase on the Paris commitment of 4.5 bcm. But even carbon alarmists accept that planting more trees is not an acceptable substitute for reducing fossil fuel usage.

Measuring such things is notoriously open to abuse. But above all, growing new forests is essentially a one off exercise in reducing emissions. Yes, they can absorb carbon dioxide as they grow, but then they die or get cut down, and the whole cycle starts again.

In other words, they provide a one off cut in emissions, but are not a long term solution.

China’s long term strategy appears to revolve around a massive expansion in nuclear capacity. This has long been the case, and has nothing to do with climate change, however much Xi may dress it up.

Instead, it has much to do with energy independence and long term security, particularly if coal reserves start to run out in a few decades time.

However, even in China, there are obstacles in the path of rolling out large mounts of nuclear power – it is not cheap and there are environmental issues. In the medium term then, China will remain almost totally reliant on fossil fuels.

The idea that renewable energy can ever fill the gap is pie in the sky.

All data on China electricity is from the China Energy Portal