A new paper reveals that climate models have failed to take important natural factors, such as the North Atlantic Oscillation, into account in their climate models on which leaders have been basing their policies. 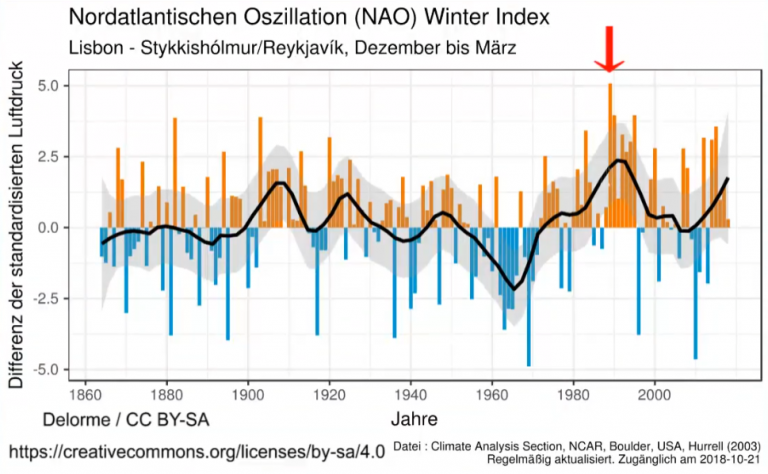 Can the ups and downs of the climate of the coming years and decades be predicted? A large group of researchers (Smith et al. 2020) affirms this and describes in a Nature article that much more is possible here than current climate models suggest.

Quantifying signals and uncertainties in climate models is essential for the detection, attribution, prediction and projection of climate change1,2,3. Although inter-model agreement is high for large-scale temperature signals, dynamical changes in atmospheric circulation are very uncertain4. This leads to low confidence in regional projections, especially for precipitation, over the coming decades5,6. The chaotic nature of the climate system7,8,9 may also mean that signal uncertainties are largely irreducible. However, climate projections are difficult to verify until further observations become available. Here we assess retrospective climate model predictions of the past six decades and show that decadal variations in North Atlantic winter climate are highly predictable, despite a lack of agreement between individual model simulations and the poor predictive ability of raw model outputs. Crucially, current models underestimate the predictable signal (the predictable fraction of the total variability) of the North Atlantic Oscillation (the leading mode of variability in North Atlantic atmospheric circulation) by an order of magnitude. Consequently, compared to perfect models, 100 times as many ensemble members are needed in current models to extract this signal, and its effects on the climate are underestimated relative to other factors. To address these limitations, we implement a two-stage post-processing technique. We first adjust the variance of the ensemble-mean North Atlantic Oscillation forecast to match the observed variance of the predictable signal. We then select and use only the ensemble members with a North Atlantic Oscillation sufficiently close to the variance-adjusted ensemble-mean forecast North Atlantic Oscillation. This approach greatly improves decadal predictions of winter climate for Europe and eastern North America. Predictions of Atlantic multidecadal variability are also improved, suggesting that the North Atlantic Oscillation is not driven solely by Atlantic multidecadal variability. Our results highlight the need to understand why the signal-to-noise ratio is too small in current climate models10, and the extent to which correcting this model error would reduce uncertainties in regional climate change projections on timescales beyond a decade.

The authors looked at the behavior of the North Atlantic winter climate over the last six decades and found that there is basically good predictability. Yet, current climate models do not make use of this as they underestimate the influence of the North Atlantic Oscillation (NAO) by an entire order of magnitude. The noise is still too high in the climate models, and the real signal is lost.

Climate scientists can confidently tie global warming to impacts such as sea-level rise and extreme heat. But ask how rising temperatures will affect rainfall and storms, and the answers get a lot shakier. For a long time, researchers chalked the problem up to natural variability in wind patterns—the inherently unpredictable fluctuations of a chaotic atmosphere.

Now, however, a new analysis has found that the problem is not with the climate, it’s with the massive computer models designed to forecast its behavior. “The climate is much more predictable than we previously thought,” says Doug Smith, a climate scientist at the United Kingdom’s Met Office who led the 39-person effort published this week in Nature.

The study, which includes authors from several leading modeling centers, casts doubt on many forecasts of regional climate change, which are crucial for policymaking. It also means efforts to attribute specific weather events to global warming, now much in vogue, are rife with errors. “The whole thing is concerning,” says Isla Simpson, an atmospheric dynamicist and modeler at the National Center for Atmospheric Research, who was not involved in the study. “It could mean we’re not getting future climate projections right.”

You can read the entire commentary at Science.

Forecasts based on weak models

Now medium-term forecasts based on the weak computer models are being put to the test. Unfortunately, these are exactly the same forecasts that have already been used for political planning purposes. Now it is probably dawning on the latter: “the Science is NOT settled”.

Even the “attribution game” of extreme weather events, which is so popular in the media, is now being put on the back burner. Not good news for Friederike Otto, who has already been treated as an attribution superstar in the media, as she claimed to be able to calculate with percentage accuracy how much man was involved in a storm, flood or drought.

But wait, the German-language media did not even report on this important new paper…perhaps it did not fit into the climate narrative given from above. Fortunately, there is the Die kalte Sonne climate blog: That’s the first place you’ll hear it.

By the way, the systematic influence of the NAO on European temperatures has also been described by Lüdecke et al. 2020 a few months earlier. So it was a logical further step by Smith et al. 2020 to actively demand improvements in climate models.

The effect of the NAO has been known for decades. Surprisingly, it is only now that resistance is stirring in the scientific community, since it was actually clear that the models did not reflect these empirically well-documented relationships.