Stonehaven Train Derailment–Did Climate Change Play A Role? Claim ‘flies in the face of the facts’

Stonehaven Derailment–Did Climate Change Play A Role?
Not A Lot Of People Know That / by Paul Homewood / 6h

First reports indicated the train was derailed by a landslip, after heavy rain and thunderstorms caused flooding and travel disruption in the east of Scotland.

One rail industry source said the train was initially halted because of flooding on the line.

The driver apparently contacted control to ask permission to switch tracks. It is believed the train reversed and switched to clearer tracks before the crash.

What role did the weather play?

He said it was too soon to speculate about the cause of the derailment.

But he added: “What I think we can assess, though, is that weather has had an impact.”

He revealed the train had been travelling north, attempting to return to Aberdeen, when it crashed….

Network Rail was warned about its resilience to severe weather just four weeks before the Aberdeenshire derailment.

A health and safety report by the Office of Rail and Road noted a spike in landslips, demonstrating the “vulnerability” of the railways.

Network Rail said it was working with meteorologists to strengthen the information it receives about flash flooding caused by extreme weather and its engineers were reviewing the remote monitoring of high-risk sites to test whether it can be improved.

The government-owned company added that its extreme weather action teams will “incorporate immediate learning into their plans as soon as it becomes available”.

Chief executive Andrew Haines said: “Our climate is changing and it is increasingly challenging the performance and reliability of the railway, but incidents like yesterday’s devastating accident are incredibly rare, and our railway remains the safest major railway in Europe.

“Our network was designed for a temperate climate, and it’s challenged when we get extremes such as storms and floods.

“We’re seeing this more and more and although we can address them on the ground with precautionary measures, we are acutely aware we need a long-term resolution, and we had already secured additional funding and resources to help achieve this.

“Yesterday was a tragedy, a truly horrific event, and my thoughts remain with everyone affected. Understanding what happened is the key to making sure it never occurs again.”

Until a full investigation takes place, we will not know exactly what happened at Stonehaven. However, quite disgracefully, Network Rail’s CEO is already trying to shift the blame on to climate change.

KNMI’s data runs from 1961 to 2018, and there is no evidence that daily rainfall is becoming more extreme at any of the stations.

I have also been told that the landslip is being blamed on heavy winter rainfall this year. But again this flies in the face of the facts: 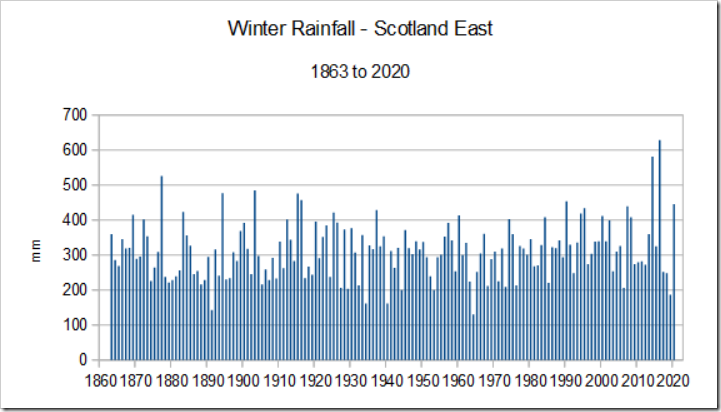 And as we know, of course, we had a notably dry spring this year. Nor have June and July been particularly wet, so the ground could not have been unusually wet prior to this week’s storms.

It will be a scandal if Network Rail are able to wriggle out of their failures and responsibilities by blaming this accident on climate change.