Junk Journalism: NYT’s Claim “More Torrential Rains” In Japan Takes A Bath, No Basis
NoTricksZone: Not here to worship what i… / by P Gosselin /

The Kyushu region of Japan has been getting lots of rain lately, which has led to flooding and 62 reported deaths because local officials failed to properly heed warnings to evacuate.

The New York Times, however, blames it all on the “collision” of “demographic change and global warming” instead of incompetence by local authorities.

“In recent years, climate change has spurred more torrential rains in Japan, causing deadly flooding and mudslides in a nation with many rivers and mountains,” reports Motoko Rich of the New York Times (NYT).

Unfortunately the NYT neither provides data nor cites any study showing this to be the case.

So we look at Japan precipitation trends going back decades – something the NYT journalists obviously neglected to do themselves (or they did, but then decided not to bring it up). 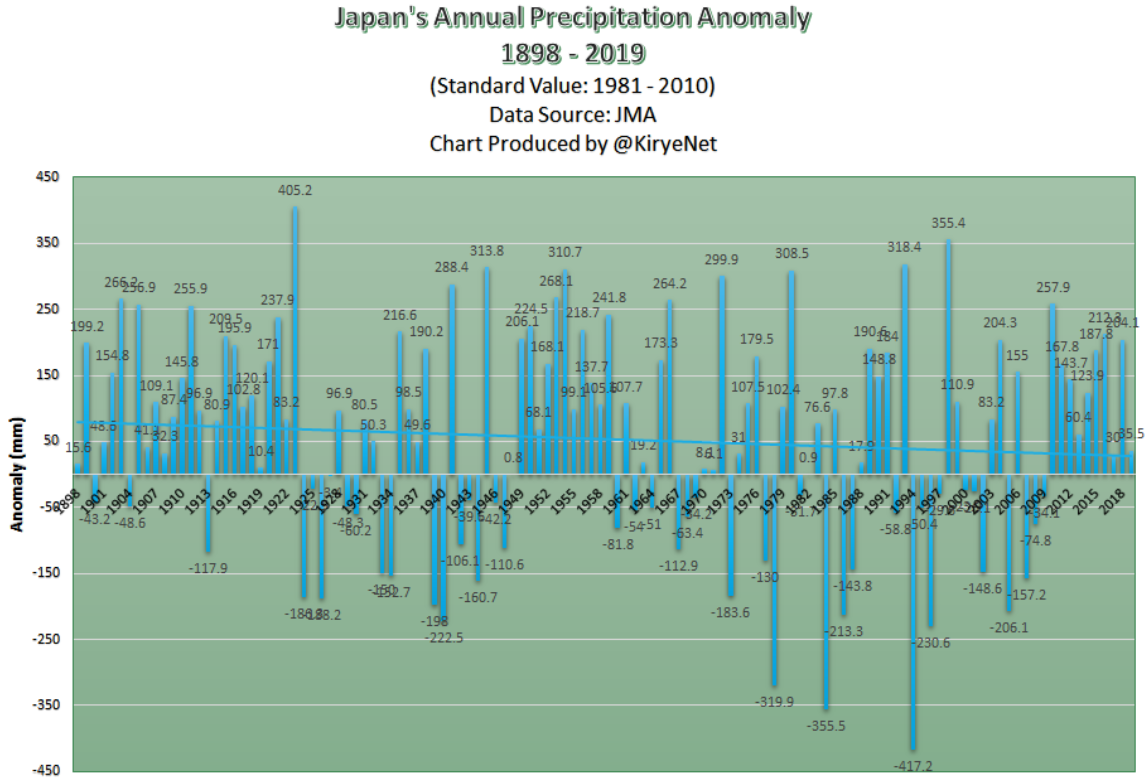 The plotted data above show how Japan’s precipitation has indeed trended downward somewhat since 1898, and not risen.

The most recent decade in Japan has seen precipitation levels similar to that of the 1950s, and the very early part of the 20th century. Nothing unusual is happening here.

Next we look at the JMA annual precipitation data for Hitoyoshi, Kumamoto Prefecture itself since 1948:

Here we observe very little trend change at all. The recent rainfall in the region over the past decade has been similar to that seen in the 1950s. Extremes are no more intense or frequent today than they were in the past.

Going a step further into greater detail, we look at the southern Japan region’s rainfall for July, going back to 1948.

Also the here we have the same story: no major trend changes to speak of. Very wet July months in fact were just as frequent and more intense in 1950s.

Finally we look at the region’s number of days recording a temperature of 30°C or higher.

Here as well the REAL trend is in fact bucking what the NYT always likes to suggest: increasingly more hot days because of global warming.

Incompetent authorities after all

Later in the article, Rich does ultimately get around to the real cause of the recent flooding deaths in Kyushu: “The Japanese government issues standardized evacuation protocols, but they do not take into account the unique characteristics or terrain in different parts of the country, said Professor Tsukahara of Kyushu University.”

But all in all, very shoddy journalism here by the New York Times. They would do their readers a service by checking the data instead of lazily repeating old, exaggerated narratives.