Groups receiving substantial PPP loans include the Center for Biological Diversity ($2-5 million), 350.org ($1-2 million), Food & Water Watch ($2-5 million), Friends of the Earth ($1-2 million), and the National Wildlife Federation, with a loan of between $5-10 million. Other groups with a record of resisting energy development and infrastructure construction, including Earthworks, the Rainforest Action Network, WildEarth Guardians, and Oil Change International, received smaller loans of between $150,000 and $1 million.

Many of these green groups actively lobbied Congress to pass the CARES Act while they also tried to stop relief being directed toward the energy industry.

On Monday, the U.S. Treasury and Small Business Administration released data on recipients of the Paycheck Protection Program (PPP) loans authorized by Congress in March under the Coronavirus Aid, Relief, and Economic Security Act (CARES) Act. The government-backed loans were a part of an economic stimulus package passed to combat the fallout from mandated shutdowns due to the COVID-19 pandemic.

Groups receiving substantial PPP loans include the Center for Biological Diversity ($2-5 million), 350.org ($1-2 million), Food & Water Watch ($2-5 million), Friends of the Earth ($1-2 million), and the National Wildlife Federation, with a loan of between $5-10 million. Other groups with a record of resisting energy development and infrastructure construction, including Earthworks, the Rainforest Action Network, WildEarth Guardians, and Oil Change International, received smaller loans of between $150,000 and $1 million.

Many of these green groups actively lobbied Congress to pass the CARES Act while they also tried to stop relief being directed toward the energy industry.

The Center for Biological Diversity in March deemed support for the industry a bailout and lambasted Congressional Republicans in the Senate for passing a $2 trillion stimulus package that included support for the energy industry along with the airlines industry. The group actively lobbied for passage of the CARES Act, according to their lobbying filings.

At the time, Brett Hartl, government affairs director with the CBD, said, “Republicans granted the wish of the airlines and oil companies to get massive public financing without curbing the damage they’re doing to our planet.” He told E&E News it was “fundamental hypocrisy and arrogance” for oil and natural gas companies to seek PPP loans.

But even as the CBD was trying to prevent oil and gas companies from obtaining PPP loans, the group was lobbied for the passage of the CARES Act, which it benefited from. Lobbying reports show CBD spent more than $17,000 between January and March 2020, with the CARES Act listed as a specific lobbying area of interest. 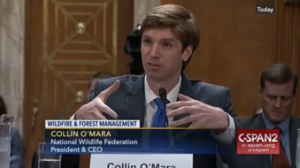 National Wildlife Federation spent $30,000 lobbying in the first quarter of 2020, receiving one of the largest PPP loans of any environmental group, a Western Wire review shows.

Friends of the Earth called loans for oil and gas companies a “surefire way to put taxpayers on the hook for distressed oil companies,” according to the Washington Post.

Defenders of Wildlife received a loan of between $2 and $5 million. The group defended their effort to obtain a PPP loan. “We feel no obligation to the Trump administration because we obtained a loan through a program authorized by Congress to help employers retain their staff,” Defenders CEO Jamie Rappaport Clark told E&E News. “Anyone who knows Defenders knows we would never pull our punches in fighting the Trump administration’s damaging and misguided policies for wildlife and public lands.”

EarthWorks and Oil Change International were listed in a recent press release from Sen. Chris Coons (D-Del.) as supporters of his Coronavirus Oversight and Recovery Ethics (CORE) Act. The bill is designed to bring oversight, accountability, and transparency in the government’s response to the stimulus package.

Senator Coons said in the release, “We have to ensure that aid is going to workers and businesses who need it most, not just the businesses with the most political connections.

Congressman John Sarbanes (D-Md.), a House sponsor of the bill, added, “COVID-19 relief must go to those who need it most. American families, small businesses, health care providers and state and local governments are hurting and we must do all we can to block special interests and corporate insiders from gaming the system.”

Food & Water Watch is among those special interest groups and has made resistance to energy development a core of its advocacy. The top campaign on its website urges supporters to tell their members of Congress to support a fracking ban. Other campaigns focus on resistance to pipeline construction or broader energy development. In keeping with this anti-energy stance, the Food & Water Watch vocally resisted support for the energy industry during the COVID downturn and shutdown according to its most recent lobbying disclosure report.

The environmentalist group received a $2-5 million loan under the CARES Act.

League of Conservation Voters also rejected moves to support domestic oil producers to survive an era of plummeting price and instead pushed for support of minority and low income communities. The group spent $70,000 on lobbying from January to March 2020 as COVID-19 spread and joined a dozen groups in sending a letter on March 20th calling for Congress to exclude oil and gas companies from any relief package.

Tiernan Sittenfeld, senior vice president of government affairs, called the move a “poignant example” of the administration’s “backward” priorities. “Prioritizing corporate special interests in the midst of an unprecedented public health and economic crisis is the Trump administration at its worst,” Sittenfeld said. “Now is the time to support communities, especially the low income communities and communities of color suffering the most from the coronavirus pandemic, the climate crisis, and toxic pollution — not bail out corporate polluting industries and put our health at further risk.”

However, the Michigan chapter of LCV received a loan ranging from $150,000-$300,000 according to data from the Small Business Administration.

The loan-level data disclosures released this week include 4.9 million PPP loans made, with those receiving above $150,000 identified by recipient name. Those below are anonymized.

“The PPP is providing much-needed relief to millions of American small businesses, supporting more than 51 million jobs and over 80 percent of all small business employees, who are the drivers of economic growth in our country,” said Treasury Secretary Steven T. Mnuchin. “Today’s release of loan data strikes the appropriate balance of providing the American people with transparency, while protecting sensitive payroll and personal income information of small businesses, sole proprietors, and independent contractors,” he continued.