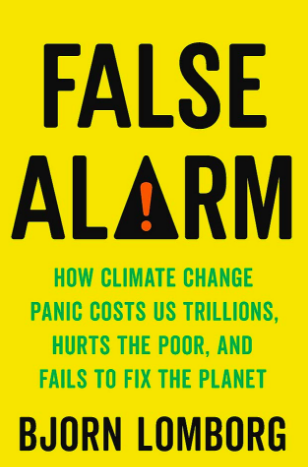 In a world where hyperbole and hysteria continue to displace reasoned discourse, Lomborg offers cogent, thoughtful arguments in an attempt to return perspective and reason to the climate change discussion.

No matter your predispositions regarding the climate change issue, you’re sure to find something alarmingly objectionable about skeptical environmentalist Bjorn Lomborg’s latest work, “False Alarm.”

That’s precisely what makes this book so important.

In a world where hyperbole and hysteria continue to displace reasoned discourse, Lomborg offers cogent, thoughtful arguments in an attempt to return perspective and reason to the climate change discussion. He does so by using science and economics as those disciplines should be used: as broad floodlights illuminating all facets of an issue, not as laser pointers focused only on the data that support a cherished thesis.

The subtitle to “False Alarm” is “How climate change panic costs us trillions, hurts the poor, and fails to fix the planet.” As subtitles go, that’s a bit clunkier than most, but it’s a fair summation of what follows.

Lomborg addresses his core mission statement early on: “We’re scaring kids and adults witless, which is not just factually wrong but morally reprehensible. If we don’t say stop, the current, false climate alarm, despite its good intentions, is likely to leave the world much worse off than it could be.”

Someone reading the above statement and who knows nothing about Lomborg might assume that this Danish professor is what one side of the climate change debate would call a “denier.” While he has been so labeled on occasion, thoughtful critics recognize Lomborg as something else, neither fish nor fowl within the climate change menagerie.

He acknowledges that our climate is changing, and he admits that mankind has been and will continue to play a role in that change. What he refuses to do, and what he wishes all of us would refuse to do, is panic.

Lomborg brings an accessible style to “False Alarm,” allowing a reader to digest facts and arguments without being overwhelmed. He talks tothe reader, in contrast to so many works on the subject that lecture and harangue. The nature of the climate change debate makes it impossible to have a wholly inclusive discussion in any single book, but Lomborg makes a valiant attempt.

Like any writer on the subject, he must pick and choose which facts, examples, and ideas to present, and these are, of course, designed to support his central thesis. That said, Lomborg makes a heroic effort to be fair to all points of view. When he rejects a popular argument, he generally does so without malice, although his understandable frustration with the performance of journalists and politicians when addressing climate change is evident.

“False Alarm” is full of quotable moments. Lomborg delivers one of the best early on as he makes what should be an obvious point: that the world—and particularly the developing world—faces a host of challenges that are much more immediate and potentially harmful than climate change and that it’s irresponsible to pretend that reducing carbon emissions is the key to solving all of them.

He concludes, “If we insist on invoking climate at every turn, we will often end up helping the world in one of the least effective ways possible.”

One of the bolder ideas Lomborg presents will surely draw the ire of critics: the idea that man may one day be able to manipulate the planet’s climate.

In a chapter titled “Geoengineering: A Backup Plan,” Lomborg argues that it may be possible to control the weather using heretofore undiscovered technologies. Citing the substantial drop in global temperatures that resulted from the eruption of Mount Pinatubo, Lomborg says man may find ways to directly manage temperatures if needed. He doesn’t advocate implementing such a solution anytime soon, but argues that we should still research such approaches.

“It might just prove to be the earth’s best backup plan,” he says.

He criticizes the Paris Agreement as poorly conceived and, even if fully implemented, ineffective. He advocates for a (modest) carbon tax, is critical of solar power because of its cost and relative inefficiency, but is a strong advocate of funding research into alternative and renewable sources of energy.