Antarctic Penguins Could Experience ‘Population Boom’ Due To Global Warming

Antarctic penguins could experience a ‘population boom’ due to global warming as melting sea ice means they have to spend less time foraging for food.

Antarctic penguins could experience a ‘population boom’ due to global warming as melting sea ice means they have to spend less time foraging for food. 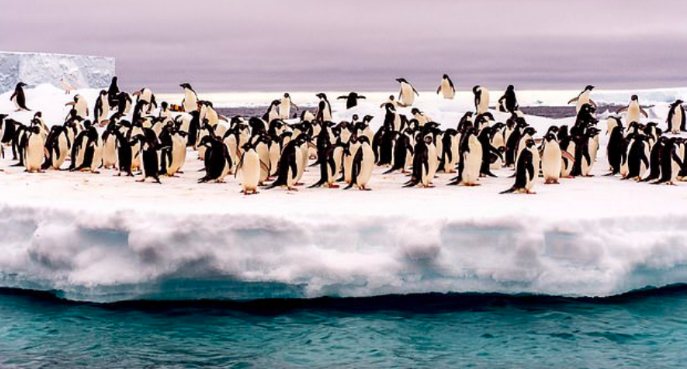 Large group of Adelie penguins on an ice floe in Antarctica. Adélie penguins on the continent covered more ground in less time by swimming instead of walking as they searched for prey, which meant healthier and more robust populations

Another false alarm goes up in smoke

Japanese scientists describe the Adélie species of penguin, which is native to Antarctica, as a ‘rare global warming winner’ thanks to melting ice.

In low-ice conditions, penguins are able travel more by swimming than by walking, which increases their access to foods such as fish and krill.

For Adélies, swimming is four times faster than walking, meaning faster access to food and, in turn, healthier offspring and longer lifespans.

The research team electronically tagged nearly 200 penguins in the Antarctica with GPS devices, video cameras and other equipment to monitor the effects of less ice.

The penguins were shown to be able to conduct shorter dives while catching more krill, due to not having to locate cracks in the ice for breathing while submerged.

It turns out that these penguins are happier with less sea-ice,’ said lead researcher Yuuki Watanabe at the National Institute of Polar Research in Tachikawa, Japan.

This may seem counter-intuitive, but the underlying mechanism is actually quite simple.

They may be sleek in the water but are pretty slow waddlers overland.’

Antarctica, the Earth’s southernmost continent, has actually experienced a steady increase over the course of decades in the extent of its sea ice – frozen seawater.

This contrasts with its polar twin, the Arctic, which has suffered through a marked decrease.

Hot news from the Antarctic: the penguins are prospering. And why is that interesting? Because this is the creature which was supposed to be the principal victim of climate change and the consequent loss of sea ice.

Yet last week, researchers from Japan’s National Institute of Polar Research produced a report showing that the Adélie penguin (whose only home is the Antarctic) has been thriving like never before — and it’s because of the changing habitat.

Having tagged 175 of these endearing birds, the scientists discovered that the penguins caught more krill because of the loss of ice. ‘Counterintuitively for this ice-dependent species, body conditions and breeding success improved in the ice-free environment,’ they explained.

One of the researchers added: ‘For penguins, swimming is a whopping four times faster than walking’, so they were able to forage in larger areas for shorter periods of time.

And what of that creature even more loved by humans: the polar bear? Three years ago a National Geographic video of a solitary starving polar bear, its rib cage distressingly visible, became an internet sensation, watched by an estimated 2.5 billion people.

‘This is what climate change looks like,’ said National Geographic.

Well, that particular polar bear was clearly in a bad way. But over the past 15 years, the polar bear population has risen from around 22,500 to as much as 31,000, according to the International Union for Conservation of Nature.

Meanwhile, the Adélie penguins are loving the climate. Can we be forgiven for driving cars now?