In 6 New Studies Scientists Agree Clouds Play A ‘Central Role’ In Regulating The Earth’s Climate
NoTricksZone: Not here to worship what i… / by Kenneth Richard / 4h 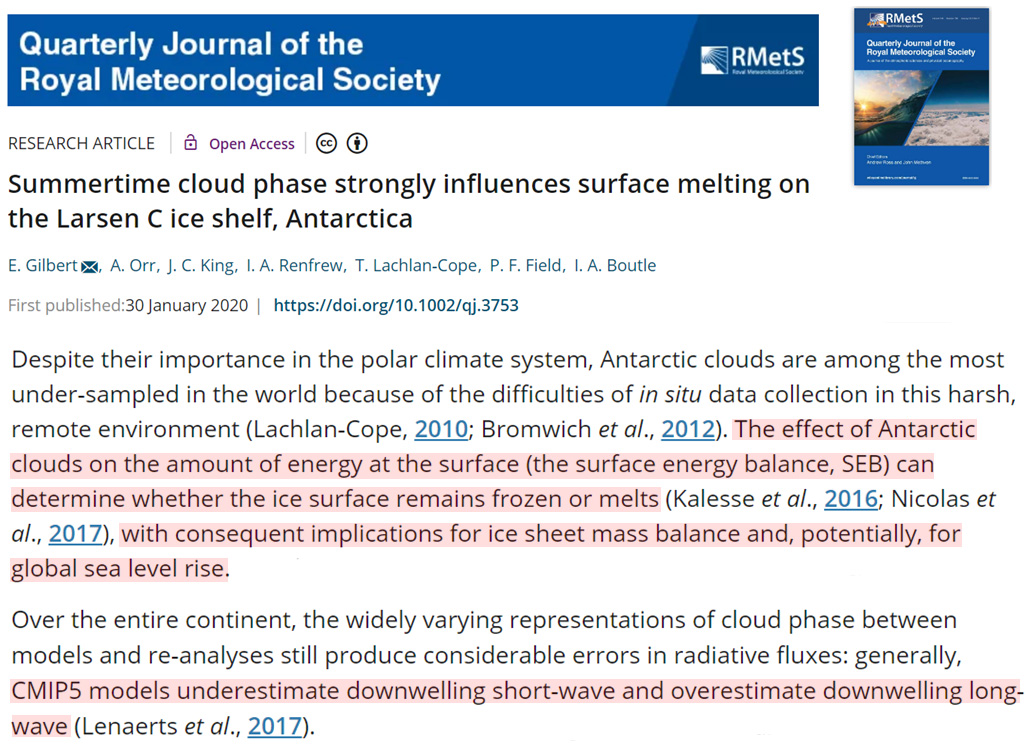 “Surface melting on Antarctic Peninsula ice shelves can influence ice shelf mass balance, and consequently sea level rise. We show that summertime cloud phase on the Larsen C ice shelf on the Antarctic Peninsula strongly influences the amount of radiation received at the surface and can determine whether or not melting occurs.”

“Cloud radiative effects (CREs) are known to play a central role in governing the long-term mean distribution of sea-surface temperatures (SSTs). Very recent work suggests that CREs may also play a role in governing the variability of SSTs in the context of the El Niño/Southern Oscillation.”

“Clouds crucially regulate atmospheric energy balance, water circulation, and Earth’s climate system with multiple spatiotemporal scales (Boucher et al. 2013). Fundamental conundrums on clouds, the coupling of clouds with atmospheric circulation, and climate interactions have remained unsolved and have been identified as considerable challenges in climate research (Bony et al. 2015). One of the largest uncertainties amongst these challenges is the vertical property of clouds and their radiative effects (Li et al. 2015). Vertical variation of clouds can affect the vertical distribution of atmospheric radiative heating, surface energy balance, and general circulation by changing the vertical structure of radiative warming and cooling rates (Johansson et al. 2015; Pan et al. 2017). Quantifying the vertical distribution of cloud radiative forcing and their impacts on atmospheric circulation and regional climate has become critical.”

“Toward this goal, here we analyze the radiation at the top of the atmosphere and propose a measure of the DCC [diurnal cloud cycle] radiative effect (DCCRE) as the difference between the total radiative fluxes with the full cloud cycle and its uniformly distributed cloud counterpart. When applied to the frequency of cloud occurrence, DCCRE is linked to the covariance between DCC and cloud radiative effects. Satellite observations show that the daily cloud cycle is strongly linked to pacific decadal oscillation (PDO) and climate hiatus, revealing its potential role in controlling climate variability.”

“Our research supports the idea that clouds and albedo, which ultimately determine the SW radiation, are variables of the utmost importance for current climate change, in agreement with previous research about the changes in stratocumulus or energy imbalance in the last four decades for example. An increase in cloud coverage of 0.1 would, on average, lead to a 7% increase in spectrally integrated global average reflectance of shortwave radiation.”

“When reaching the Earth, part of the incoming solar radiation is reflected off clouds and the surface as shortwave radiation (SW). Changes in cloud distribution or the surface albedo affect this flux and change the energy balance. In the last four decades, changes in cloud distribution in low-level clouds such as subtropical stratocumulus have been of great importance since they have the ability to reflect large amounts of radiation back to space but do not reduce significantly the outgoing terrestrial radiation. … [S]hortwave radiation is the main driver in the dynamics and plays a major role in the energy balance by affecting the longwave radiation field.”

“The existence of reflective surfaces such as clouds or the ground determines directly the amount of SW radiation and, thus, the available energy for being absorbed and reemitted as LW. … A plausible hypothesis to explain the changes in SW radiation is that cloud amount and properties have changed in the last decades.”